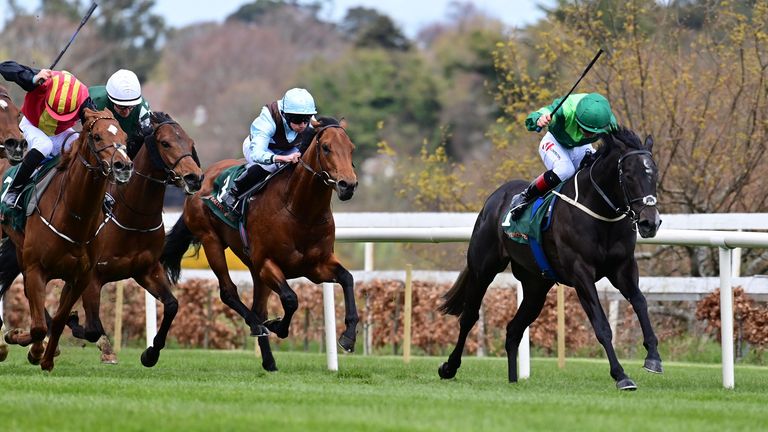 The chestnut ran nine times last season and was triumphant at the highest level when taking the Keeneland Phoenix Stakes at the Curragh in August, where he came home three-quarters of a length ahead of Ger Lyons’ Dr Zempf.

A third-placed run in the Vincent O’Brien National Stakes followed, another Grade One event at the same track, after which the Galileo Gold colt finished eighth when contesting the Prix Jean-Luc Lagardere at ParisLongchamp in October.

The latter two races were over a seven-furlong trip, something Palmer will avoid with the horse this season as he feels he is most suited to a distance of five or six furlongs.

“We’re really looking forward to running him, he had a very busy year last year and whether his last run was a sign of him being over the top or he just didn’t really stay that seven furlongs, I don’t know,” he said.

“We’ve decided to put a line through trying to make him stay, but I’m just really looking forward to running him at Newmarket.

“It wouldn’t surprise me if we ended up going back to five for the King’s Stand if he’s good enough.”

The form from Ebro River’s Curragh success was given a recent boost when Dr Zempf triumphed in the Listed 2,000 Guineas Trial Stakes at Leopardstown, with Go Bears Go’s second-placed Breeders’ Cup run also heartening as he was the third-placed horse in the Phoenix Stakes.

Palmer said of Dr Zempf: “He’s done the form no harm at all and Go Bears Go ran well in the Breeders’ Cup, too.”

Jane Chapple-Hyam’s Bellosa will also line up having won twice at Newmarket previously.

The four-year-old won her maiden at the meeting last year and then went on to take the Listed King Charles II Stakes at the same track before finishing 14th on soft ground in the Jersey Stakes at Royal Ascot.

Last seen coming home the runner-up in a Kempton all-weather handicap in December, the filly will step down to six furlongs having been campaigned strictly over seven thus far.

“There wasn’t anything for her early doors over seven (furlongs), so we thought for a first run of the season, why not give it a go over six?” Chapple Hyam said.

The trainer remains opened-minded as to the horse’s ideal trip, saying: “Either or really, (depending on) whatever’s available and how well she is.

“Sometimes you can get a stiff six, or an easy seven, so I think we’ll just get through Wednesday’s race then regroup.”

Chapple Hyam attributes Bellosa’s Jersey Stakes run to the testing going and was pleased to see her run competitively at Kempton before her winter break.

“It came up well too soft for her in the Jersey and she was paddling, she just didn’t enjoy it,” she said.

“So we gave her a break after that and just gave her the run at Kempton just to remind her about racing before putting her away for the winter.”

Elsewhere in the race is Eve Johnson Houghton’s Jumby, a four-times winner who signed off last season with a handicap success on the Rowley Mile.

Chris Wall’s Double Or Bubble takes her chance having won the Listed Flying Fillies’ Stakes last term and Henry Candy’s Run To Freedom will switch to turf after running on the all-weather on both of his most recent outings.