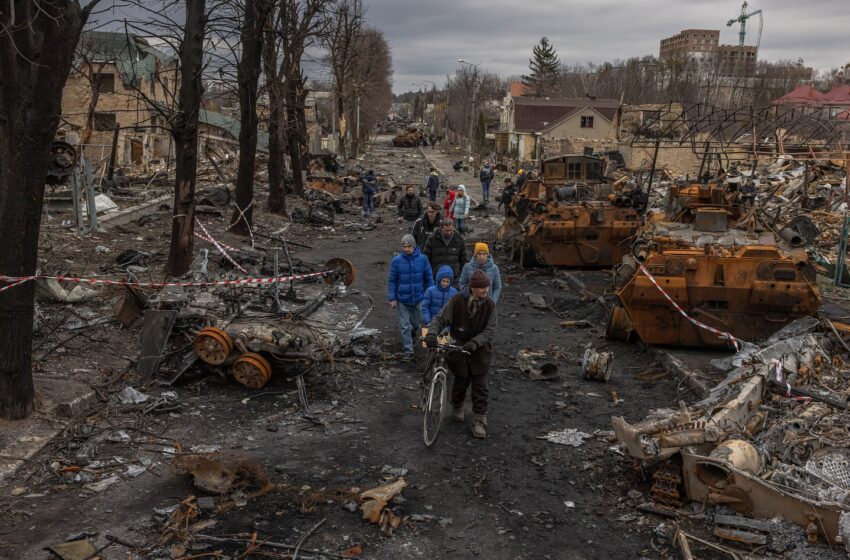 In two separate communications, Russian soldiers described how they question soldiers as well as civilians and then proceed to shoot them, according to an intelligence official familiar with the findings who, like others, spoke on the condition of anonymity because of the matter’s sensitivity.

The findings, first reported by the German magazine Der Spiegel and confirmed by three people briefed on the information, further undermine claims by Russia that atrocities are being carried out only after its soldiers leave occupied areas.

Scenes from Bucha, a suburb near the Ukrainian capital, have become a symbol of the war’s atrocities and galvanized calls for probes into possible war crimes. One person said the radio messages are likely to provide greater insight into suspected atrocities in other towns north of Kyiv that had been held by Russian soldiers.

Germany has satellite images that point to Russia’s involvement in the killing of civilians in Bucha, the intelligence official said, but the radio transmissions have not been linked to that location. The foreign intelligence agency, known as the BND, may be able to match signal intelligence with videos and satellite images to make connections to specific killings, two people said.

These people also said the radio traffic suggests that members of the Wagner Group, the private military unit with close ties to Russian President Vladimir Putin and his allies, have played a role in attacks on civilians. Another person briefed on the intelligence said the involvement could have been by the Wagner Group or another private contractor.

German intelligence officials on Wednesday briefed members of at least two parliamentary committees on the findings, according to people familiar with the process.

“The reported cruelties have affected the members of the respective committees where it was reported very strongly,” said one of the people briefed on the intelligence.

Another person said the agency had high confidence in the findings, though it was not specific about how it obtained the radio communication. The third person said the information contributes to understanding of attitudes inside the Russian military but hardly represents “final evidence of who shot whom at what time.” This person said the examples discussed by the BND point to an atmosphere of panic leading soldiers to “cut corners.”

Reliance by Russian troops on unsecured communication devices, including smartphones and push-to-talk radios, has left their units vulnerable to targeting, Western defense and intelligence officials say.

A spokesperson for the BND declined to comment. A government spokesman, Steffen Hebestreit, made an elliptical reference Wednesday to “credible indications” that Russian forces in Bucha were interrogating prisoners “who were subsequently executed.” He cited only “insights that we have.”