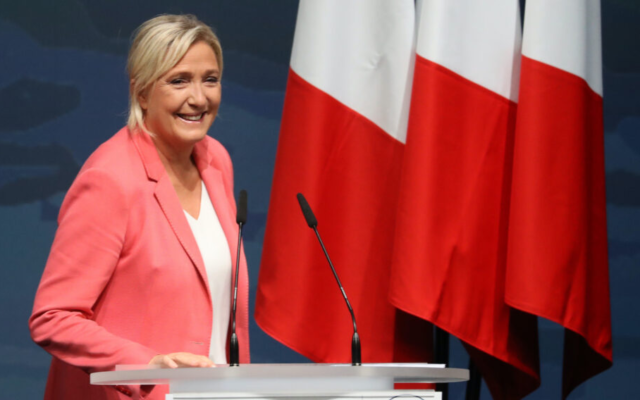 PARIS, France (JTA) — It’s been six months since Éric Zemmour quit his job as a journalist to run as a far-right candidate in France’s presidential elections. But this week Zemmour, who is Jewish, landed likely the biggest scoop of his career.

On Tuesday, just days before Sunday’s first round in the presidential race, the right-wing Zemmour broke on social and mainstream media the story of Jérémie Cohen, a 31-year-old disabled Jewish man whose death in February police now suspect may have been the indirect result of violence, which some believe was antisemitic.

Zemmour, a 63-year-old former television pundit whose chances of becoming president are slim, has helped focus national attention on the incident in the midst of a campaign in which antisemitic violence, the rule of law and politicized Islam are central themes.

Asked on TF1, France’s most popular domestic television network, what his first act as president would be, Zemmour replied on Wednesday: “To visit the family of a young man whose name was Jérémie Cohen. The French public doesn’t know about him yet, that’s normal. I will tell the story.”

Zemmour, who is trailing three to four other candidates in recent polls, recounted how Cohen’s death was treated as a vehicle accident for nearly two months, until the man’s father, Gerald, shared with Zemmour the results of the family’s private investigation — including a video in which Cohen is seen running away from men who assaulted him and getting fatally hit by a tram.

The video attracted the attention of incumbent President Emmanuel Macron and other candidates vying for the presidency. The exposure prompted Paris prosecutors this week to announce for the first time that they are opening a criminal investigation into the affair.

In February, Jeremy Cohen was killed by a tram in a Paris suburb. At the time, police treated it as a road accident.

Now, a new video has emerged showing him being chased by a mob and his family are calling on police to investigate it as an antisemitic attack. pic.twitter.com/tErbi52cBN

For the firebrand Zemmour and his supporters — including many Jews — the incident captures the heart of what is wrong in French society, including the proliferation of antisemitic violence and the media’s treatment of it.

For Zemmour’s many critics, including leaders of French Jewry, the incident underlines what they regard as his and the broader far-right’s unscrupulous use of France’s social and political issues to foment fear and win votes.

“I condemn this use of the suffering of this family, the use of this young man as a martyr,” the chief rabbi of France, Haim Korsia, said on Tuesday in an interview with the RCJ Jewish radio station.

Korsia has called Zemmour, whose wife and partner are both Jewish and who sometimes goes to synagogue, an “antisemite.”

If Zemmour is using Cohen’s death to boost his campaign, it isn’t going as planned. Occupying the fourth or fifth slot according to the polls, he is projected to drop out of the race after Sunday’s first round. A second-round will feature Sunday’s top two vote-getters; projections point to Macron, a centrist, and Marine Le Pen, the daughter of a Holocaust denier who has sought to reform the image of her far-right National Rally party. In Neuilly-sur-Seine, an affluent suburb of Paris with many Jewish residents, multiple congregants told the Jewish Telegraphic Agency that they don’t view the Cohen case through the prism of the local elections.

“I heard about it on social media. It makes me scared,” said Pierre Allouche, a 60-year-old father of two teenage girls, one of whom wants to leave for Israel on a Jewish volunteer program. “But it’s not going to affect my vote because it’s just the latest of many incidents of this sort, which have already shaped the way I and many other French Jews vote.”

Like many if not most French Jews — including Zemmour’s parents — Allouche was born in Algeria, he told JTA on a rainy afternoon in Neuilly’s synagogue, a striking Bauhaus-style building encircled with fences for security reasons.

Zemmour, who has been convicted of hate speech for saying that most drug dealers in France are Arabs or Africans, struck a chord with Allouche through passionate speeches about lawlessness and the perceived growth of political Islam at the expense of the rule of law. But that hasn’t earned Allouche’s vote — in fact, Zemmour “scares me,” he said.

“I agree with Zemmour on many points, but I wouldn’t vote for him. Out of the question,” he said. “Look at his defense of Vichy, his bizarre remarks on Dreyfus.”

Allouche named two of the issues that have received little attention nationally but have pushed many Jewish voters away from supporting Zemmour: His controversial claim that the Nazi-collaborating Vichy government sacrificed foreign Jews to save French ones from the Holocaust, and that Alfred Dreyfus, a French-Jewish army captain who was convicted for treason in a trial critics said was antisemitic, was targeted not because he was of Jewish descent, but due to his German roots. 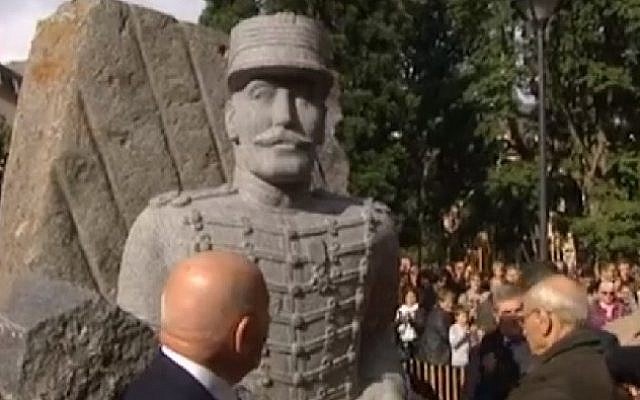 A statue of Alfred Dreyfus is erected in Mulhouse, France, October 21, 2016. (Screenshot)

“I’m a patriot. I agree with his call for patriotism, but it’s as if Zemmour reaches the point where I could agree with him, and then goes far too far. It’s like he’s overcompensating for being a Jew, and decides to be more French than the French,” Allouche added.

Allouche was going to vote for Valerie Pecresse, another hard-right candidate polling around Zemmour’s tier, but has been let down by her “weak performance” in debates and speeches. “I might just vote for Macron, who’s actually quite tough on radical Islam,” Allouche said.

Jean-Marc Moskowicz, 63, a retired lawyer and head of the right-wing Europe-Israel advocacy group, is one of Zemmour’s Jewish voters. He’s aware of the criticism but says it’s the result of “media manipulation. The media caricature what Éric says but if you read the source, it’s not over the top.”

But he agrees the Cohen case will probably not dramatically change the voting patterns of French Jews — a minority of about 450,000 people, or 0.7% of the general population.

“I think French Jews will vote massively for Zemmour, but not because of the Jérémie Cohen case. Tragically, it is more of the same,” said Moskowicz.

Cohen’s father, Gerald, has said that he contacted Zemmour to get more publicity for the video he had uncovered. 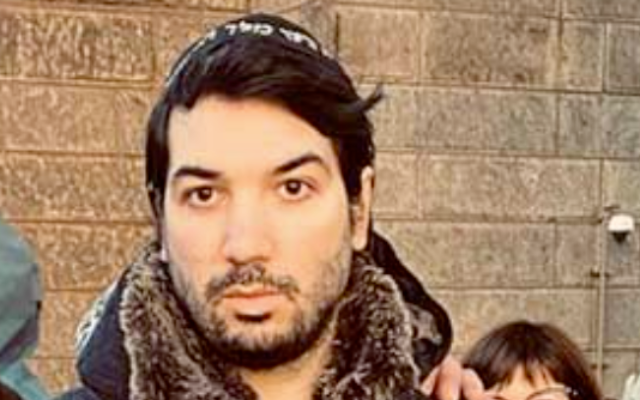 Jeremy Cohen, a French Jew, who was killed after being hit by a train, apparently while trying to escape an antisemitic attack near Pris in February. (Courtesy)

“He got right on it,” Gerald Cohen said of Zemmour. “It helped wake people up. He helped us enormously, helping us with the investigation and eventually make arrests and punish the guilty. He’s a good man who advocates for causes like this one, not only for me, and Éric Zemmour did this bravely.”

For many observers, the Cohen recalls the traumatic 2017 killing of Sarah Halimi, a 65-year-old physician whose Muslim neighbor killed her while shouting about Allah.

The case, which also shortly preceded the last round of presidential elections, was first reported on as a neighborly dispute in national media. It infuriated thousands of French Jews, especially after the perpetrator avoided standing trial last year with a temporary insanity plea based on his consumption of marijuana before the incident.

“It definitely brings back bad memories from the Halimi case,” Allouche said.

Whatever his reasons, Zemmour, who recently founded a party called “Reconquest” — a possible allusion to the incremental recapture of Spain in the 15th century AD from Muslim rule — has been boosting the Cohen case far beyond any of his rival candidates. 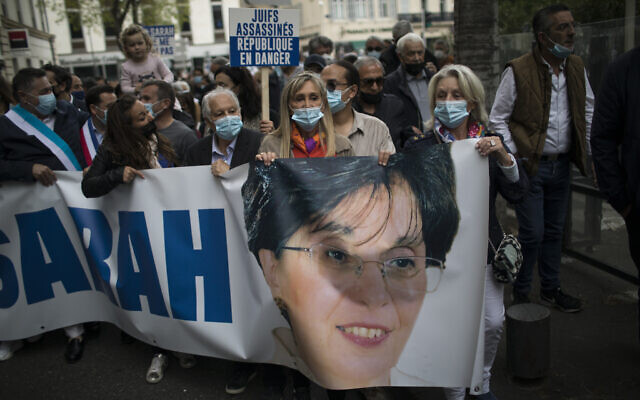 In a speech he gave Thursday to thousands of listeners, the crowd started shouting “Jérémie” and “justice” as soon as Zemmour began describing the incident.

“I think you know I want to talk to you about Jérémie Cohen,” he said, triggering more shouts and applause. Zemmour, calling Cohen a “victim of barbarians,” asked the crowd to stand up and observe a moment of silence in Cohen’s memory.

“Everything was done so this story stays hidden, a political machination,” he said. “Why the facts about an incident that happened on February 16 surfaced only on April 4? Why did the family need to launch their own investigation? Why did the media collude to hide these facts?”

Macron told reporters on Tuesday that he expresses “solidarity with the family” and wishes to see “clarity,” which he said authorities are now attempting to give to the best of their abilities.

Le Pen also addressed the incident, speaking of it in an interview Wednesday with Europe 1 as an example of an increase in “savagery in our society and the exacerbation of antisemitic incidents in our country.” 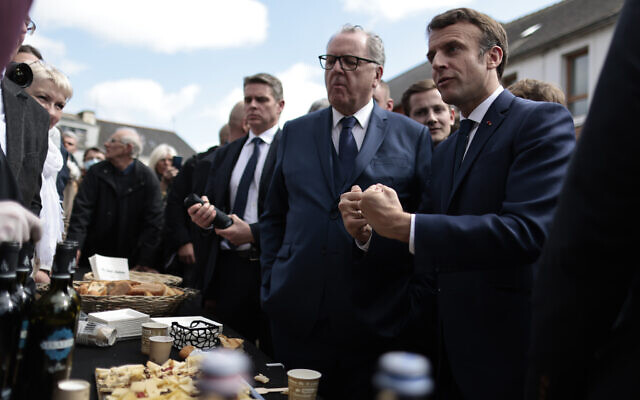 French President and centrist candidate for reelection Emmanuel Macron, right, talks with residents as he campaigns in the village of Spezet, Brittany, April 5, 2022. (AP Photo/Jeremias Gonzalez)

The circumstances around Cohen’s death are not yet clear. Cohen usually wore his kippah, though it is not clear whether he had it on the night he died. His father told i24 News that police gave him his son’s kippah along with the son’s other possessions. The fact that it happened in Bobigny, an impoverished and heavily Muslim suburb of Paris, has fueled speculation in a country that has seen several terrorist attacks carried out by Muslims in the past decade.

Back in Neuilly-sur-Seine, Madeline Zerbib, a 77-year-old Jewish widow who was born in Tunisia and raised three children in France, says she is “watching the elections through her fingers,” with horror.

“I didn’t see the Jérémie Cohen video, I was too afraid to watch,” she said. “I also don’t watch the elections coverage because it’s too horrible, a fascist against a Napoleon against a kiss-ass and I’m too afraid to go visit my niece because she lives outside this Jewish ghetto,” Zerbib said, shaking her head and right hand.

“This is what’s left of this great country,” she added.