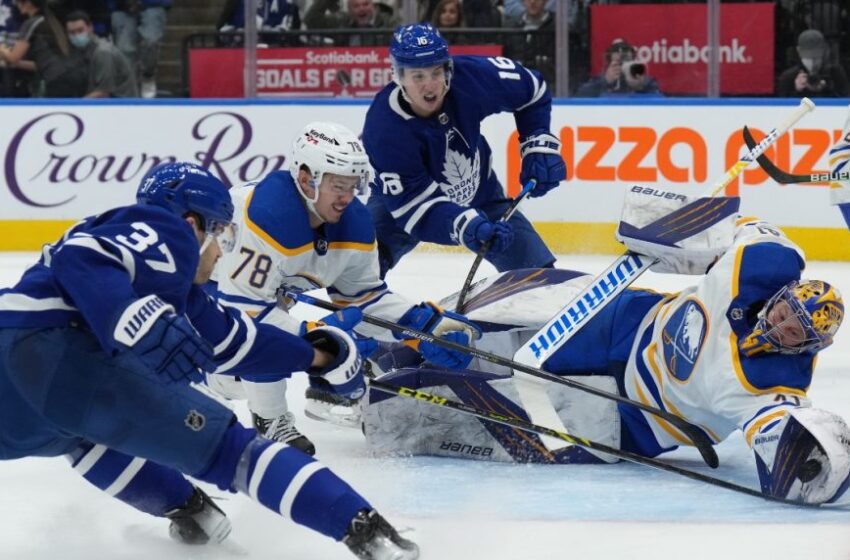 TORONTO – The good news about Toronto’s first-round playoff opponent is that it won’t be the Buffalo Sabres.

Boy, do the Maple Leafs’ cross-lake neighbours have their number.

Crumple up the standings page. It’s irrelevant whenever these two rivals clash.

With their decisive and deserved 5-2 road victory Tuesday, the Sabres became the only club to beat the Leafs three times this season, outscoring them by a grand total of 15-5 over their past three outings.

“They’ve come with speed and made plays, so I think that’s kind of caught us a little bit,” William Nylander admitted.

If it’s a disturbing trend for these Leafs, routinely delivering subpar performances against non-playoff teams. It’s also a trend that won’t be so relevant in three weeks.

Head coach Sheldon Keefe had hoped his group’s humbling in Hamilton against the Sabres would stir some inspiration as Toronto begins to ride out the string and heal its wounds for what matters.

“These are the kind of games that can be challenging,” Keefe said. “We’re just coming off clinching a playoff spot and you got a non-playoff team coming in.”

Meanwhile, the “upbeat” Sabres (Peyton Krebs’ word) were rallying around the debut of future star Owen Power and savouring the role of underdog.

Kyle Okposo’s power-play snipe with one tick remaining in a Morgan Rielly high-sticking minor opened the scoring in Period 1.

Leafs defenceman Timothy Liljegren, hopping back in the linuep after sitting two games as a healthy scratch, tied things up in the second period.

But a second power-play strike — Tage Thompson skillfully taking a puck off the skate blade from Alex Tuch and whipping it in stride past Erik Källgren — gave the Sabres a lead they would not relinquish.

Jeff Skinner and Rasmus Dahlin extended the lead in Period 3. And while Alexander Kerfoot responded late, the damage had been done.

The Maple Leafs should stand a much better chance Thursday, when they host Alex Ovechkin and the Washington Capitals.

• Blue-chip NCAA prospect Matthew Knies is set to meet Leafs GM Kyle Dubas on Wednesday in Minnesota to discuss his future. The door is open for the 19-year-old to hop aboard the wagon and sign on for a Toronto playoff run. Or he can stay in school and try for one more championship bid with the Gophers

“He’s had a monster season in college hockey. Not just in college hockey, but in world juniors, Olympics, he’s really made his mark. We’re very excited about having him in the organization,” said Keefe, who has watched Knies’ highlights.

“[He’s] going through a process right now in sorting through what’s going to be the next step for him. When the time is right for him, our team will, of course, welcome him. Whether it’s this season or down the line, they’re going to go through that process.”

• Quote of the Day comes from Sabres coach Don Granato on red-hot former pupil Auston Matthews: “The scary thing is, I’ve seen signs that he can do more.”

• Dahlin is increasingly fun to watch. The 21-year-old is coming into his own as Buffalo’s most trusted D-man. Granato didn’t own last change, but his preference was to have Dahlin square off against the Matthews line.

“He’s an ultra-competitor. He wants the toughest matchup there is. He asks for it,” Granato says.

Kyle Okposo — as thoughtful a quote as you’ll find off the QEW — says the 2018 first-overall pick is one of the most driven people he knows.

“He wants to prove that he’s better,” Okposo said. “He gets very fiery and super competitive. It’s great to see him take the steps he has this year. I think his defensive play has come a really long way. He thrives in those matchups.”

• Michael Bunting’s career-long goal drought has extended to 17 games. He came so close to quenching it:

• Power made a strong first impression in his debut, busting up a 2-on-1 in the first period and getting some difficult matchups. The teenager didn’t look out of place at all.

“Super talent,” Keefe said of the University of Michigan alum. “Size. Skill. Poise. A lot of similarities to Dahlin, I think, in terms of how they move and the presence they have on the ice.”