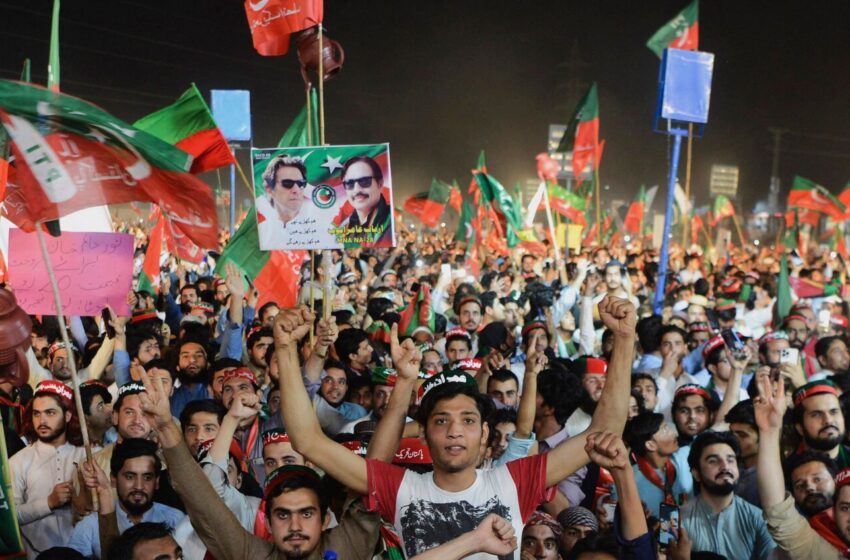 Even out of office, Imran Khan shows he can still draw a crowd KABUL — Just four days after being legally forced to step down as Pakistan’s prime minister, Imran Khan began laying the groundwork for a political comeback, drawing thousands of supporters to a late-night rally Wednesday in the northwest city of Peshawar.

The event marked the launch of a nationwide campaign of public rallies, which Khan is calling a “freedom struggle” against his foreign and domestic adversaries. While asking his supporters to remain peaceful, he vowed to keep the mass street actions going until the country’s new leaders call for early elections.

Packed in a large field with a huge stage erected at one end, Khan’s supporters waited for hours, milling excitedly in the dark, waving flags and chanting. Finally, just after midnight, he took the stage.

“Pakistan has now become a nation,” Khan declared. “I am thankful to God that I was removed and you all came and gave me such respect.”

In his first public appearance since his ouster, Khan said a “decisive moment” had arrived and the country had to make a choice. “Do we want to be the slaves of the United States, or do we want real freedom?”

Khan has repeatedly accused U.S. officials of colluding with his legislative opponents and issuing threats against his government, and has made U.S. interference a centerpiece of his new campaign.

Khan’s renegade tactics — and the mass resignation of his party’s legislators Tuesday — raised concerns that Pakistan could be plunged into another political crisis, just as its new leaders begin to grapple with the country’s worst economic crisis in decades.

“It appears that he would rather wreck the system than accept the humiliation of being ousted,” columnist Zahid Hussain wrote in Pakistan’s Dawn newspaper Wednesday. By boycotting democratic institutions and taking to the streets, he said, Khan “seeks to dismantle the entire edifice.”

A onetime cricket star turned political reformer, Khan won election in 2018 as a champion of the poor and an enemy of what he called Pakistan’s corrupt, dynastic political elite. But after months of struggling to prop up the foundering economy, and weeks of fighting to remain in power, he was defeated Sunday by a vote of no confidence in the National Assembly.

His failure to make unpopular policy decisions, as inflation climbed steadily and the national currency fell to an unprecedented 185 rupees against the U.S. dollar, cost him public support at a critical moment and gave his opponents critical leverage to remove him from office.

But as news of his ouster spread Sunday night, dozens of pro-Khan street rallies erupted across the country. The size and emotional intensity of the rallies appeared to surpass even Khan’s expectations, and swiftly shifted the political calculus of the moment, even as power was transferred to a new prime minister, Shehbaz Sharif.

A 70-year-old politician and wealthy industrialist, Sharif epitomizes Pakistan’s permanent ruling class. He praised Khan’s legal removal from power as a victory for the constitution and the law, but he quickly sought to bring back his older brother Nawaz Sharif, a three-time prime minister who was jailed on corruption charges in 2019 and now lives in London.

In his speech, Khan charged that the new government is “full of individuals out on bail,” hoping to create a popular movement against Sharif before he consolidates enough power to win elections later this year. Even if he fails, observers said, a sustained display of public enthusiasm could still undercut the new government’s ability to shore up Pakistan’s ailing economy.

Munawar Shah, 55, a laborer in the crowd, said he had never met Khan but admired him for curbing terrorism and championing health care for the poor. The region has long been a stronghold of Khan’s Movement for Justice party.

“Since he became prime minister, we finally have peace in our area after a long hard time,” Shah said. “The health card in my pocket is due to him.” He also said Khan was a “righteous man” who once opened a speech at the United Nations with a Koranic prayer. “He never bowed his head before the world. You see all these people coming out. This shows how they love him.”

Many rallygoers expressed anger at Khan’s abrupt removal from power. Sheraz Ahmad, 49, a provincial education administrator who has supported Khan for years, called his ouster “disgraceful. This was not the way an elected elder should be treated,” Ahmad said.

Like others in the crowd, Ahmad blamed interference from the United States as well as domestic rivals for undermining Khan. “Those who hatched this conspiracy did not expect he would get such huge support, but now they are aware of the consequences,” he said.

Khan first raised allegations of a “foreign conspiracy” only a few weeks ago, but they have resonated powerfully with many Pakistanis. He has labeled the Sharif regime an “imported government,” declaring he possesses a secret diplomatic cable proving that a U.S. official threatened his government, though he has refused to release the cable. He also claims — without evidence — that some of his legislative opponents collaborated in a U.S. plot against him.

These charges have been tersely denied by the State Department, but they have taken off on Pakistani social media in the past week and dominated chants and posters at pro-Khan rallies across the country. A screenshot of Twitter trends Wednesday night showed a four-day total of 4 million tweets in Urdu with a hashtag translating to “imported government unacceptable.”

Many people have also posted comments critical of Pakistan’s military establishment, which initially supported Khan but distanced itself from him as he sought to cling to power. Though the army has often intervened in Pakistani politics, military officials have remained publicly neutral in the current political crisis.

But Khan’s popular momentum and plan to press for new elections have led to a rare division of opinion within the military. On Wednesday, some retired generals praised Khan or acknowledged that he enjoys wide popularity, while criticizing the Sharifs, who have held power repeatedly over the years and have often been viewed as too close to the military.

“There is no doubt that a lot of people have been mobilized by Khan. Whatever people want to say, a fact is a fact,” Naeem Khalid Lodhi, a retired army general, told a TV news interviewer. Lodhi noted that when Khan was elected in 2018, the Sharifs charged that the results had been rigged and demanded new elections. Now, he said, “I think Khan wants an early election, and I think he’s right about that.”