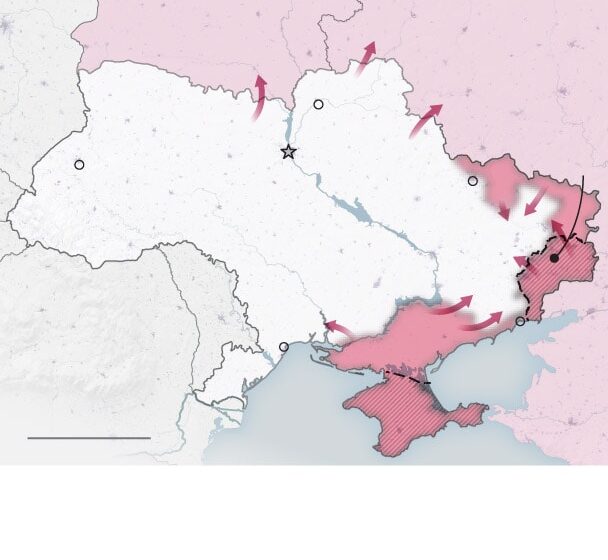 MUKACHEVO, Ukraine — Ukrainian officials called Wednesday for evacuations in three provinces near the Russian border amid new signs that President Vladimir Putin’s troops are escalating their assault on eastern and southern cities following a failed attempt to take the country’s capital.

Local officials reported renewed Russian shelling in the eastern Donetsk region, killing at least five people, and as many as 10 high-rise apartment buildings on fire in Severodonetsk, in the neighboring Luhansk district. U.S. analysts said Moscow has begun gradually shifting the focus of its military operations to the eastern border provinces after withdrawing thousands of troops that previously encircled the capital, Kyiv.

The continued violence came amid fresh reports of human-rights atrocities in Ukrainian cities and towns that had been under Russian control. Accounts of rape and summary executions of civilians by Russian occupiers prompted the United States and several allies to announce new economic sanctions, including measures targeting two of Russia’s largest banks and Putin’s adult children.

“We’re going to further increase Russia’s economic isolation,” President Biden said in a speech announcing the sanctions at a meeting of North America’s Building Trades Unions. “The United States will continue to stand with the Ukrainian people in their fight for freedom.”

Biden again accused Russia of committing “major war crimes” and said the additional measures would further strain its economy. “Civilians executed in cold blood, bodies dumped into mass graves,” he said, ticking off a list of alleged war crimes. “A sense of brutality and inhumanity left for all the world to see unapologetically.”

The speech came as NATO and European Union leaders gathered to consider additional measures to punish Moscow and support Ukraine. A possible European ban on Russian coal is expected to be approved on Thursday, along with additional military aid for Kyiv from the NATO alliance.

Pentagon officials confirmed Wednesday that Russia had, in the past 24 hours, completed an evacuation of all forces from around Kyiv and Chernihiv, two cities it had tried unsuccessfully to capture in the opening days of the invasion, now in its sixth week.

While U.S. analysts have not observed a tangible increase in troops and tanks in the Donbas — the energy-rich region near the Russian border that includes Donetsk and Luhansk — the Pentagon believes that retreating units are regrouping for a concentrated assault on the eastern provinces. Some of the recently withdrawn troops are now in neighboring Belarus, where the pro-Moscow government is allowing Russia to resupply its exhausted battalions. Few, if any, have reentered Ukraine so far, a senior Defense Department official told reporters.

“Our assessment is that they won’t want to spend too much refitting and resupplying because they have made a very public show of saying that they’re going to prioritize their efforts on the Donbas region,” said the official, who spoke on the condition of anonymity according to rules set by the Pentagon. Sources: Institute for the Study of War, For their part, Ukrainian forces are “absolutely adapting and adjusting in real time to Russian efforts now to increase their activities” in eastern Ukraine, the official said. “As they have beaten back the Russians or as the Russians have left, they are reoccupying that ground and making their own assessments about what their force posture ought to be going forward.”

Increased shelling in the eastern provinces claimed additional casualties on Wednesday, including the five people reportedly killed in Donetsk. Provincial Gov. Pavlo Kyrylenko said four people were killed by Russian artillery fire in the city of Vuhledar as they waited to receive humanitarian aid. The fifth victim, also a civilian, was killed during an attack on the town of Ocheretyn, he said, and six houses and a kindergarten facility were destroyed.

A regional military official in Luhansk reported “mass shelling” in Severodonetsk. The number of casualties was unclear. Video posted on Facebook and verified by The Washington Post shows townspeople scrambling for cover as shells explode in a residential street.

Why are Donetsk and Luhansk in Ukraine’s Donbas region a flash point for Putin?

Ukrainian Deputy Prime Minister Iryna Vereshchuk, in broadcast remarks, urged residents of the Luhansk, Donetsk and Kharkiv regions to start preparing for the expected Russian onslaught. While the Kremlin has described the troop withdrawal from Kyiv as a “goodwill” gesture to facilitate peace talks, she said it was clear that more attacks were coming. Moscow has greater support in the east, where Ukrainian forces and Russian-backed separatists have been locked in a grinding conflict for many years.

“We need to evacuate,” she said. “We must do it because then people will be on fire, they will be shot … and we will not be able to help them.”

Elsewhere in Ukraine, rescue workers looked for survivors in rubble-strewn neighborhoods newly freed of Russian troops. Washington Post reporters witnessed scenes of devastation in Borodyanka, a community northwest of Kyiv that had been pummeled by airstrikes that gouged huge chunks out of residential buildings.

In a schoolyard that was converted into a garrison while Borodyanka was occupied, the Russians had cut a trench through a playground and built a sandbag wall along the perimeter fence, with openings for gun emplacements.

In a ruined apartment a few blocks away, Katia Palivshenko, 34, said she feared that some of her neighbors were still trapped, and likely dead, in the basements of bombed-out buildings nearby. Cellphone service had faltered when the town came under attack, and she had not heard from some of her friends since then.

“They were below ground but then messages stopped coming,” she said. “We don’t know what happened to them.”

In Bucha, a town associated with some of the war’s most disturbing assaults on Ukrainian civilians, soldiers and police continued the gut-wrenching work of removing and burying bodies, dozens of which still lay in the streets and in open fields. Some bodies were booby-trapped by the departing Russians, officials said.

The city remained almost entirely deserted, as mine-clearing teams searched methodically for hidden bombs. On Vokzalna Street near the train station, the blackened hulks of Russian tanks, all destroyed in a fierce counterattack by Ukrainian forces, sat in an eerie silence that was punctuated only by the barking of stray dogs.

The images from Bucha have evoked shock and condemnation around the world, including at the United Nations, where dozens of countries have backed an effort to boot Moscow from the body’s Human Rights Council — a move reserved for countries that have repeatedly violated human rights. A vote of the 193-nation body could come as early as Thursday morning at the U.N. headquarters in New York.

Members of the 27-nation European Union were preparing to decide Thursday on a measure banning all imports of Russian coal, a key revenue source for Moscow, even as NATO leaders discuss ways to further isolate Russia while bolstering Ukraine’s ability to defend itself.

“Today, tomorrow, we’ll continue to talk about not only how we can sustain these efforts but how we can build upon them,” U.S. Secretary of State Antony Blinken told reporters. He was flanked by NATO Secretary General Jens Stoltenberg, who earlier in the day warned that the conflict could become protracted despite the surge of Western military support to Ukrainian forces.

“We have to be realistic and realize that this may last for a long time, for many months, for even years,” Stoltenberg said. “And that’s the reason why we need also to be prepared for the long haul.”

Britain launched additional sanctions against eight Russian oligarchs and two Russian banks and vowed to end all dependency on Russian coal and oil by the end of 2022. “We are showing the Russian elite that they cannot wash their hands of the atrocities committed on Putin’s orders,” Foreign Secretary Liz Truss said.

In Washington, the Justice Department announced indictments against Russian oligarch Konstantin Malofeyev, who U.S. officials accused of illegally supporting pro-Russian separatists in Ukraine. Speaking at a news conference, Attorney General Merrick Garland also announced the successful disruption of a global “botnet” — or network of hacked computers — that he said was controlled by the Russian military intelligence agency known as the GRU. Moscow has used similar networks to attack Ukrainian targets, Garland said.