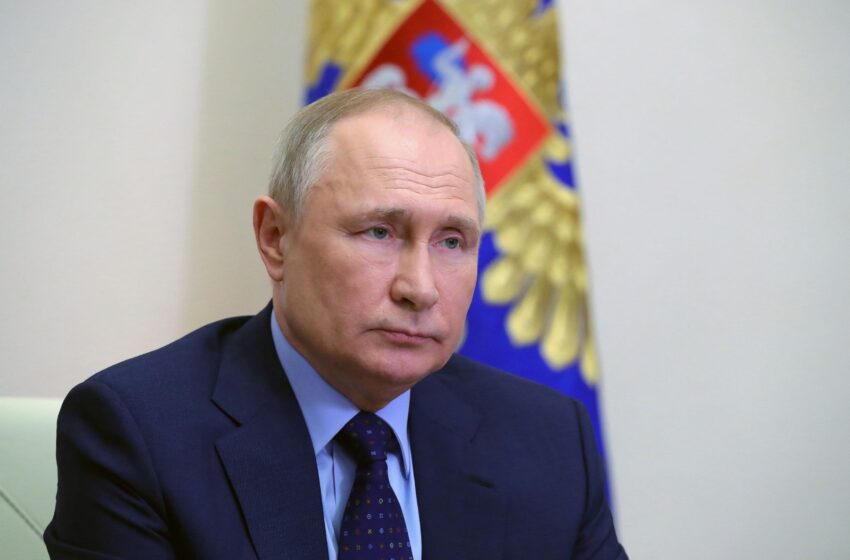 Russian President Vladimir Putin chairs a meeting with members of the Security Council at the Novo-Ogaryovo state residence outside Moscow, Russia April 7, 2022.

Congress on Thursday voted to revoke Russia’s “most favored nation” trade status, an economic downgrade that opens the door to damaging new tariffs on Moscow over its invasion of Ukraine.

The House passed the bill in an overwhelming 420-3 vote, sending it to President Joe Biden’s desk. The three members who voted against the bill were Reps. Marjorie Taylor Greene of Georgia, Thomas Massie of Kentucky and Matt Gaetz of Florida, all Republicans who strongly align themselves with former President Donald Trump.

The Senate approved the same version of the legislation in a unanimous 100-0 vote taken earlier on Thursday.

The bill, known as HR 7108, is a formal step to sever normal trade relations with Russia and Belarus — one of the Kremlin’s closest allies — to allow import controls on key products like platinum, chemicals, iron and steel.

The U.S. has already cut its normal trade relationship with Moscow in practice: the Biden administration moved to ban imports of oil, vodka, diamonds and seafood from Russia last month.

“Formally revoking normal trade relations with Russia is precisely the right thing for the Senate to do, because it will land another huge blow to Putin’s economy,” Senate Majority Leader Chuck Schumer, D-N.Y., said on the Senate floor Wednesday. “It’s a key part of any strategy for holding Putin accountable for his savage attacks on innocent civilians.”

Most favored nation status ensures that any member of the World Trade Organization receives equal trade treatment from other members and grants each designee immunity from a raft of steep import penalties.

“There are two categories you can be characterized under U.S. law: One gets lower tariffs, and one gets higher,” said Clete Willems, a partner at law firm Akin Gump and former U.S. attorney at the WTO.

“All other WTO members get this lower [tariff] rate — the average is about 2.8%,” he added. “And then for non-MFN, the average is around 20%. And so this legislation will change the tariff treatment of all of those products.”

Congress was also set to codify a promise Biden made last month to ban the import of Russian energy products into the United States. That bill cleared the Senate 100-0, and has since moved to the House, where it is expected to pass later Thursday.

Many nations, including the Group of Seven, have promised to work to end the West’s economic relations with Russia as the U.S. and its allies open investigations into what are likely to be deemed war crimes committed by Russian forces in Ukraine.

The Biden administration and its partners have worked to limit the Kremlin’s access to global financing organizations like the International Monetary Fund and the World Bank. The Treasury Department and the Federal Reserve have also worked in tandem to block Russia’s access to currencies other than the ruble, as well as target individuals and families close to Russian President Vladimir Putin with penalties.

Treasury Secretary Janet Yellen says the combined penalties are designed to dent the ruble, ruin the Russian stock market and otherwise sap Moscow’s economy over time. Through the moves, the U.S. hopes to undermine Putin’s authority.

The most favored nation bill should been considered “additive” and damaging in the context of an international, coordinated effort, the attorney Willems said.

“It’s one among many moves that together start to have a real impact on the Russian economy,” he said. “The president will have the authority to raise tariffs and other select products. And the key imports we get from them beyond oil are platinum, chemicals, iron and steel, plywood, some kinds of engines and titanium.”

The U.S. has worked in concert with its allies to hamper the Russian economy.

European Union representatives on Thursday are set to approve an embargo on Russian coal. The timing of the phase-in period was still up for debate — especially between Poland and Germany — as of Thursday morning ET.

The EU is the most important Russian export market, as its members purchased about 40% of Moscow’s traded goods in 2019.

The U.S. House voted Wednesday evening for legislation that accuses the Russian military, under Putin’s direction, of committing a litany of wrongdoings, including the intentional targeting of civilians and nonmilitary structures like schools and hospitals.