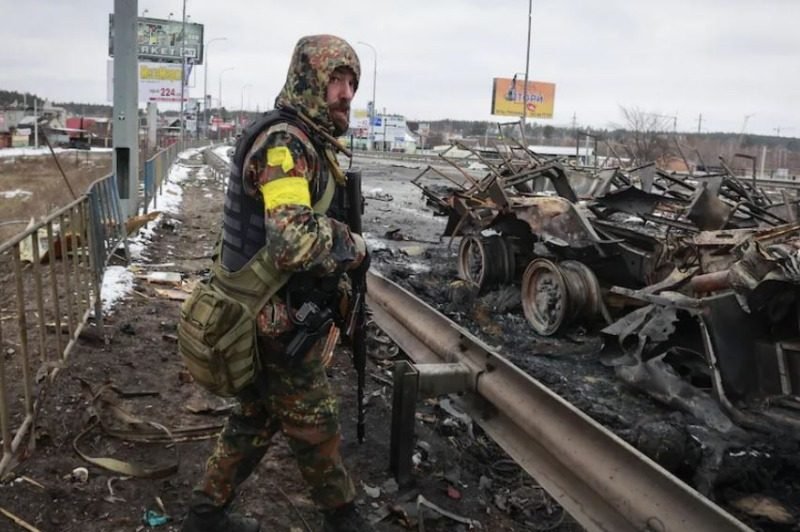 Conflict: Ukraine says it is ready to fight “big battles” after meetings with European leaders Ukraine is preparing on Sunday for a new major confrontation with the Russian army in the east of the country, which has now become the stronghold of the conflict. On Sunday, an airstrike has just destroyed a large part of the airport in the city of Dnipro.

The evacuation of civilians continues on Sunday in the regions of eastern Ukraine where the pro-Russian separatists are located, having been recognized at the start of the conflict by Moscow as independent republics.

It is in this region where the efforts of the Russian forces are concentrated, particularly in the Donbass. kyiv announced that it was ready to fight “big battles” on Sunday, no doubt a sign that the movements of European leaders in recent days have borne fruit.

Ukrainian head of state Volodymyr Zelensky continues to ask for “more weapons”, this time demanding heavy weapons from the West, including members of the European Union, Great Britain, the United States and the United States. NATO.

“Ukraine is ready for the big battles. Ukraine must win them, including in the Donbass,” Ukrainian presidential adviser Mykhaïlo Podoliak said on Saturday evening, quoted by the Interfax-Ukraine news agency.

The airstrikes and bombings continued at the same time. Cities like Kharkiv, student towns, have been targeted and left at least two people dead, regional governor Oleg Sinegoubov announced on Facebook on Sunday morning.

“The Russian army continues to wage war on civilians, for lack of victories on the front,” he denounced, indicating that in the past 24 hours, Kharkiv and its suburbs had been bombed 66 times.

At the same time, the airport of Dnipro, a large city located in eastern Ukraine, was again bombed and would be “completely destroyed”, according to the Ukrainian regional governor.

“New attack against Dnipro airport. There’s nothing left. The airport itself and nearby infrastructure were destroyed. And the missiles continue to fly,” regional governor Valentin Reznitchenko wrote on Telegram.

“We are in the process of determining the number of victims,” he added. Meanwhile, the Ukrainian President spoke on the phone with German Chancellor Olaf Scholz. “We agreed that all perpetrators of war crimes must be identified and punished,” he wrote.

The day before, he had met one-on-one in kyiv with British Prime Minister Boris Johnson. Subsequently, he declared in the company of Austrian Chancellor Karl Nehammer at a press conference: “We are ready to fight, and at the same time to seek diplomatic means to stop this war”.

On Friday, it was the head of the European Commission, Ursula von der Leyen, and the head of European diplomacy, Josep Borrell, who went to kyiv, where they notably announced the raising of more than 10 billion euros. euros for Ukraine.