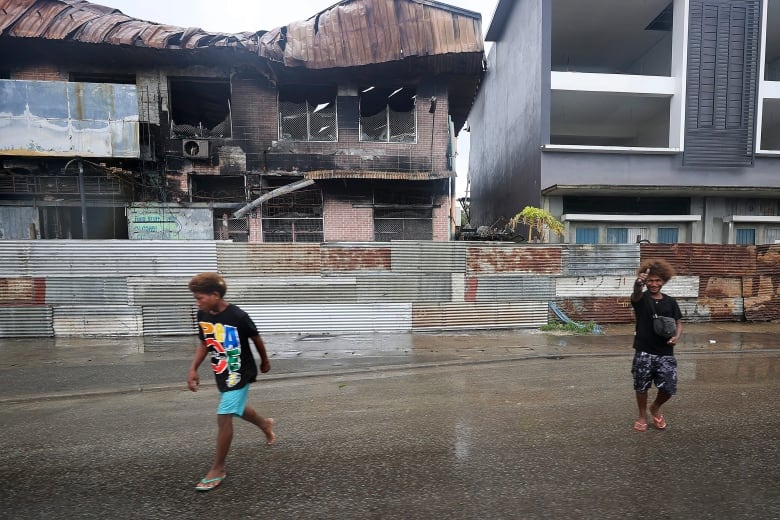 A security alliance between China and the Solomon Islands has sent shudders throughout the South Pacific, with many worried it could set off a large-scale military buildup or that Western animosity to the deal could play into China’s hands.

What remains most unclear is the extent of China’s ambitions.

A Chinese military presence in the Solomons would put it not only on the doorstep of Australia and New Zealand but also in close proximity to Guam, with its massive U.S. military bases.

China so far operates just one acknowledged foreign military base, in the impoverished but strategically important Horn of Africa nation of Djibouti. Many believe that China’s People’s Liberation Army is busy establishing an overseas military network, even if they don’t use the term “base.”

The Solomon Islands government says a draft of its agreement with China was initialled last week and will be “cleaned up” and signed soon.

The draft, which was leaked online, says that Chinese warships could stop in the Solomons for “logistical replenishment” and that China could send police, military personnel and other armed forces to the Solomons “to assist in maintaining social order.”

The draft agreement specifies China must approve what information is disclosed about joint security arrangements, including at media briefings.

The Solomon Islands, home to about 700,000 people, switched diplomatic recognition from Taiwan to Beijing in 2019 — a move rejected by the most populous province and a contributing factor to riots last November.

U.S. Secretary of State Antony Blinken responded in February by saying that Washington would reopen its embassy in the capital, Honiara, which has been closed since 1993, to increase its influence in the Solomons before China becomes “strongly embedded.”

Both China and the Solomons have strongly denied the new pact will lead to the establishment of a Chinese military base. The Solomon Islands government said the pact is necessary because of its limited ability to deal with violent uprisings like the one in November.

“The country has been ruined by recurring internal violence for years,” the government said this week.

But Australia, New Zealand and the U.S. have all expressed alarm about the deal, with New Zealand Prime Minister Jacinda Ardern describing it as “gravely concerning.”

David Panuelo, the president of nearby Micronesia, which has close ties to the U.S., wrote an impassioned letter to Solomon Islands Prime Minister Manasseh Sogavare asking him to rethink the agreement.

He noted that both Micronesia and the Solomon Islands were battlegrounds during the Second World War, caught up in the clash of great powers.

“I am confident that neither of us wishes to see a conflict of that scope or scale ever again, and most particularly in our own backyards,” Panuelo wrote.

But the Solomon Islands police minister mocked Panuelo’s concerns on social media, saying he should be more worried about his own atoll being swallowed by the ocean due to climate change.

Sogavare has likewise dismissed foreign criticism of the security agreement as insulting, while labelling those who leaked the draft as “lunatics.”

China’s Foreign Ministry spokesperson said the agreement aims to maintain the safety of people’s lives and property, and “does not have any military overtones,” saying media speculation on the potential development of a base was groundless.

Euan Graham, a senior fellow at the International Institute for Strategic Studies based in Singapore, said China has been pursuing such a port facility for some five years as it aims to expand its naval presence in the South Pacific as part of Beijing’s long-game of seeking to become the dominant regional power.

“If they want to break out into the Pacific, at some point they will need the logistics capability to support that presence,” Graham said. “We’re not talking about war plans here; this is really about extending their presence and influence.”

Unlike the base built in Djibouti, where China has commercial interests in the region to protect, Graham said any operation in the Solomon Islands would likely be less substantial.

“It’s quite a subtle and interesting geopolitical game that’s emerged in the South Pacific,” he added. “And I think the Chinese have been very successful, if you like, in outflanking the United States and Australia in an influence competition, not a military competition.”

China’s base in Djibouti was opened in 2017. China doesn’t call it a base, but rather a support facility for its naval operations fending off piracy in the Gulf of Aden and for its African peacekeeping operations. It boasts a 400-metre (1,300-foot) runway and a pier big enough to dock either of China’s two operating aircraft carriers.

The base, with 2,000 personnel, allows China to position supplies, troops and equipment in a strategically crucial region, while also keeping an eye on U.S. forces that are stationed nearby.