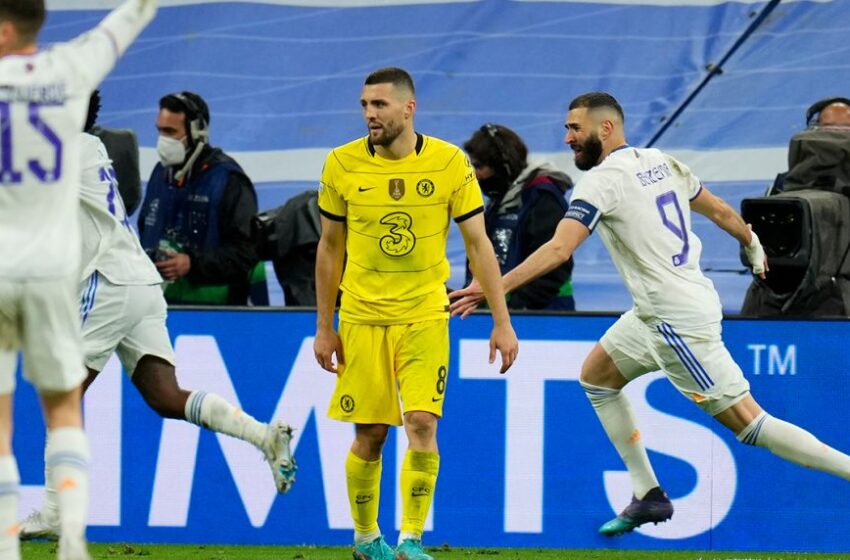 The 2021-22 UEFA Champions League is down to the final four after a wildly entertaining and memorable quarter-final round.

Here’s what stood out from this week’s games.

Chelsea entered Tuesday’s second leg in Spain with it all to do after dropping a 3-1 decision at Stamford Bridge in London last week. The reigning Champions League holders appeared to be on the ropes, as they needed a three-goal win at Estadio Santiago Bernabeu to avoid going out of the tournament – a seemingly unlikely scenario given the way they were outclassed at home just six days earlier.

But the Blues put forth a valiant effort against los blancos, overpowering their Spanish hosts early on and building a 3-0 lead, with Timo Werner’s goal in the 75th appearing to be the fatal blow. But just five minutes later, Real Madrid struck when Luka Modric played a world-class cross from the wing with the outside of his boot deep into the box for teammate Rodrygo to volley home.

French striker Karim Benzema, who scored a hat trick last week in London, had a quiet evening in the return leg before scoring on a header in the first extra time period. That proved to be the decisive moment, as Real held on to eliminate Chelsea 5-4 on aggregate, despite losing Tuesday’s game 3-2.

The goal was Benzema 12th of this season’s Champions League, setting a new competition record as the highest-scoring French player in a single season. Real Madrid has now reached the Champions League semifinals 15 times, including in 10 of the last 12 seasons, the most of any club in the competition’s history.

“You can never think anything is lost at the Bernabeu,” Real manager Carlo Ancelotti said afterwards. “I can’t explain it, but there is a magic in this stadium that helps you.”

Spanish side Villarreal continued its magical run in this season’s Champions League with a 1-1 draw against Bayern Munich in Germany on Tuesday to book their spot in the competition’s semifinals for the first time in 16 years. Villarreal, affectionately known as ‘The Yellow Submarine,’ ousted Italian giants Juventus in the round of 16 and survived a first-round group with Manchester United to book their spot in the knockout stages of the competition.

The Spaniards had a slender 1-0 aggregate lead from last week’s opening leg, but that was wiped out when Polish striker Robert Lewandowski scored his tournament-leading 13th goal of this year’s competition to put Bayern on level terms early in the second half. The Bavarians carried the bulk of the play the rest of the way, but couldn’t add another goal that likely would have sealed their qualification to the semifinals.

They paid for not finishing off their opponents in the 88th minute when Villarreal launched a blistering counter-attack from deep inside their half that ended with Samuel Chukwueze scoring just minutes after he was subbed into the game. It was only their second shot in the game, but it proved to be the difference, as the game ended 1-1 and Villarreal advanced 2-1 on aggregate. Critically, Canadian Alphonso Davies entered the game as a substitute just minutes earlier and played Chukwueze onside when he received a pass from Giovani Lo Celso across the face of the Bayern goal.

Tuesday’s result meant Bayern missed out on the semifinals for the second season in a row – they had only missed out twice in the nine seasons before that. Like a lot of Bayern’s players, veteran forward Thomas Muller was at a loss to explain his side’s premature exit: “It’s difficult to accept this. I don’t know what to say.”

Manchester City had a slim 1-0 lead over Atletico Madrid going into Wednesday’s return match in Spain. It was a contest that pitted the attack-minded tactics of City manager Pep Guardiola against Diego Simeone’s defence-first approach with Atletico.

The Spaniards didn’t register a shot on target in the opening game, and their dour tactics won them few admirers on the night. Surely, few outside of Madrid will be sad to see them eliminated after another cautious display in Wednesday’s 0-0 draw. Atletico’s attack never got out of first gear, and only managed two shots on target.

The hosts were forced to play the final minutes with 10 men after defender Felipe was red carded for kicking out at City’s Phil Foden. An already testy affair boiled over when both benches cleared before Felipe eventually left the pitch. Ten minutes of injury time did little to calm the tensions, with players from both teams having to be separated in the tunnel at Estadio Wanda Metropolitano after the game.

“What I know is that we are proud of what we are and how we compete,” Simeone replied afterwards when asked about the teams’ contrast in styles.

You have to wonder if Atletico fans would agree after such a placid performance from their team over the two legs.

Benfica shows heart in bowing out to Liverpool

Benfica had a mountain to climb going into Wednesday’s second leg at Anfield. A 3-1 loss last week in Lisbon meant ‘The Eagles’ had to win by at least two goals in order to secure their passage through to the semifinals. Even though the Portuguese outfit came up short, they deserve full credit for giving Liverpool all it can handle in a thrilling 3-3 draw.

Liverpool manager Jurgen Klopp decided to give starters Mohamed Salah, Sadio Mane, Virgil van Dijk and Trent Alexander-Arnold the night off, and the Reds didn’t miss a beat when they jumped out to a 3-1 lead after 65 minutes. But the visitors from Portugal didn’t throw in the towel, and instead, valiantly fought to draw level with their English hosts via goals from Darwin Nunez and substitute Roman Yaremchuk. Darwin Núñez finished this Champions League season with a club record six goals, surpassing the mark set by Nuno Gomes (five) in 1998-99.

A 6-4 aggregate loss was rather unkind to Benfica, who gave Liverpool a tougher time than most critics imagined when the two teams were drawn together last month. “We were 6-2 up on aggregate. [My] players are human beings. They were like, ‘Okay, job done.’ But Benfica kept fighting and I respect that,” Klopp said after the game.

John Molinaro is one of the leading soccer journalists in Canada, having covered the game for over 20 years for several media outlets, including Sportsnet, CBC Sports and Sun Media. He is currently the editor-in-chief of TFC Republic, a website dedicated to in-depth coverage of Toronto FC and Canadian soccer. TFC Republic can be found here.