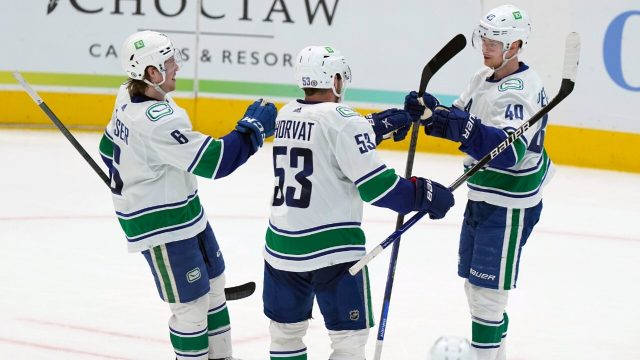 LAS VEGAS – It was strange music for a funeral. During a third-period lull, Vancouver Canuck fans, numerous enough to be heard in the Vegas Golden Knights’ arena, started chanting: “Bruce, there it is!”

This was a serenade, of course, for Canucks coach Bruce Boudreau, the catalyst of the team’s mid-season turnaround. But it also felt like more than that on Wednesday, as the Canucks, who had only one win in four years in Vegas since the Golden Knights galloped spectacularly into the National Hockey League, won 5-1.

The performance almost certainly came too late to really help Vancouver, which had won just three of its previous 12 games while falling nine points out of a wildcard playoff spot.

But it was a display of resolve not to go quietly into the draft lottery, and surely a satisfying one for Canuck players who have suffered greatly at the hands of the Golden Knights but on Wednesday dealt Vegas’ own playoff ambitions a startling blow.

It extinguished the Knights’ five-game winning streak and kept them a point out of a playoff spot in a race against teams that have played fewer games.

“Yeah, it’s a tough barn,” Canucks defenceman Tyler Myers said of T-Mobile Arena. “I’ve played here a lot, played a playoff series here (with the Winnipeg Jets). It’s a good team over there. We played exactly the way we needed to get two points. It was nice to get one, especially in this arena.”

And nice to get a win while missing top defenceman Quinn Hughes and top-six forward Brock Boeser, ill and injured, respectively, following the Canucks’ 3-2 overtime loss to the Knights in Vancouver on Sunday.

Kyle Burroughs, who had played five NHL games in six years before joining his hometown Canucks this season and forcing his way into the lineup, played his first game since suffering an upper-body injury on Feb. 19. Boudreau said he owed Burroughs the chance to reclaim his spot.

Oliver Ekman-Larsson replaced Hughes on the power play and had two assists. Myers logged 25:10 of ice time in the re-made defence. But the difference-maker, besides goalie Thatcher Demko, was forward Elias Pettersson, who played right wing on a line with J.T. Miller and Tanner Pearson and scored two goals and two assists and seemed to drive play whenever he was on the ice.

“I thought was his best game,” Myers said. “I thought it was his best game of the year. He’s played a lot of good hockey the last month, the last couple months. Never mind the points. . . Petey is a special player and he played special tonight. We get him to play like that more often, he’s going to be a great player for a long time for us.”

Told about Myers’ assessment that this was Pettersson’s best game, Boudreau said: “It could have been.  I mean, he was all around the puck. He made some really intelligent plays. He knows where to go. And I think playing on the right side. . . he sees the ice so well, so when he’s got the puck on the right side, and he turns, he’s got everything on his forehand. If you look down history, (Alex) Ovechkin, guys that have played their off-wing, have been very good. And I think Pettersson has that same kind of vision.”

Pettersson, a left-shot centre who has played a lot of left wing this season, has six goals in five games.

He was involved in all but the second Canucks goal as Vancouver, which actually trailed 1-0 against the run of play when Jack Eichel scored at 12:02 of the first period, dominated much of the first half and allowed the Golden Knights just nine shots on net in the first 29 minutes.

Pearson, on a fabulous backhand setup by Pettersson, made it 3-1 at 11:40 of the second before Pettersson scored at 16:03, shaking free of Eichel by looping around the Vegas net just in time to redirect Ekman-Larsson’s excellent feed towards the back post.

Another Martinez giveaway, and a nice reverse pass by Alex Chiasson, allowed Pettersson to score again at 1:11 of the third period as Vancouver’s power play went two-for-three.

It was all over but the singing.

“For the time of year and what we needed, it was a pretty good all-around game,” Boudreau said. “The goalie had to be great, but the players in front of him were really good, too. When they play 60 minutes, they’re a tough team to beat because we’re usually pretty good when we’re playing with the lead.”

Asked about winning without Hughes and Boeser, Boudreau said: “It made them more in tune that they had to play their best game because we’re missing two top players. When you’ve got that — and I’ve seen it happen many times — when your lineup gets depleted, everybody’s senses are heightened and. . . they just play a better game.”

“We talk about it almost daily — about how we’re at our best when we play above the puck. And when we don’t, we’re pretty average out there. We just have to do it more consistently. I know there’s not a lot of games left, but we have to do it for the remaining 11 here.”

The Canucks visit the Arizona Coyotes on Thursday before opening a five-game homestand Saturday against the San Jose Sharks.