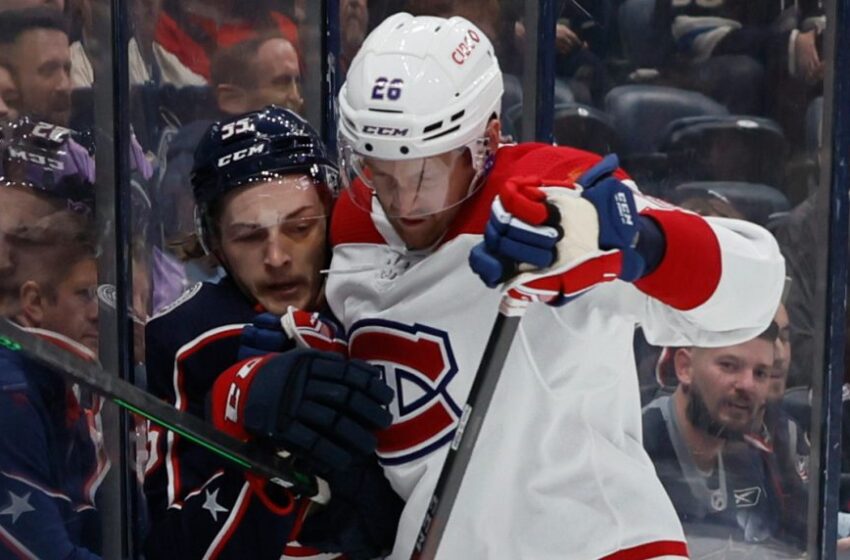 Canadiens’ Petry energized by reunion with family in Columbus

This was a difficult night for most of the Montreal Canadiens, but a good one for Jeff Petry.

They lost 5-1 to the Columbus Blue Jackets and failed to generate much of anything that would’ve given them a more respectable result, but he finished the game with an assist and helped the Canadiens generate 66 per cent of the expected goals while he was on the ice at 5-on-5.

Petry wasn’t perfect, but he played with some wind in his sail and some “pep in his step,” as his wife, Julie, told us she expected he would.

They were reunited on Tuesday after spending the last nine-and-a-half weeks—and most of the last 13—apart, and she had a feeling that would lift his spirits.

It was in January, with Quebec’s COVID restrictions in full effect, that they decided together that Julie and the couple’s three boys, Boyd, Barrett and Bowen, would remain at their home in Michigan while Jeff would return to Montreal to rejoin the Canadiens after he and the entire family caught COVID-19.

For how long? Neither of them knew.

With a trade request filed, there was thought the Petry family might be back together in the United States before Mar. 21.

But they knew it was unlikely a trade would materialize and that it was probable they’d be apart for upwards of three-and-half months.

Still, they made the difficult choice to see their decision through.

“We know we made the best one for OUR family,” Julie wrote in an Instagram post on Jan 10. “One can only hope for a normal return for us in the fall, but at this point I am just taking it day by day and being grateful that we had an option to stay in a place where our boys can live a much more ‘normal,’ healthy lifestyle while being closer to our family for support during this unbelievably, yet still crazy time.”

Jeff had gotten off to a miserable start to the season, appearing nothing like the player who put up at least 40 points in each of the preceding years. He quickly went from hero to scapegoat, with the Canadiens going from Stanley Cup finalists in 2021 to Draft Lottery favourites before even getting to 2022. It made what was already a challenging existence (due to the pandemic) an untenable one for the Petry family in Montreal.

Julie was early into her fourth pregnancy, running after three young boys who were in and out of daycare and school, all while hateful messages were filling her social media inboxes as Jeff struggled to find his game.

“Sometimes it takes a leap and a close circle of support to go forward with said decision in order to prioritize your mental health and that of your family’s,” Julie wrote in the post announcing how the Petry family would approach the rest of the season.

They were able to see each other for a few days in Florida over the NHL’s February All-Star break but, with Jeff back on a loaded Canadiens schedule and Julie further along in her pregnancy and looking after their boys, getting to see each other proved too challenging.

There was a planned reunion meant to take place a couple of weeks ago in Florida, but Jeff aggravated his back injury from earlier in the season and couldn’t make it.

“It’s tough,” he said after his return to play in a Canadiens loss to the Toronto Maple Leafs last Saturday.

“It goes in waves,” Petry continued. “Technology is our worst friend and our best friend, so it’s good to be able to chat with them on Facetime. It gets hard when they’re asking when you’re coming home. So, it’s been alright, but I definitely miss them.”

But on Tuesday, Julie and the kids packed up the car and made the three-and-a-half-hour drive to Columbus.

“We got to the hotel before the team got there, and the anticipation of waiting for them in the lobby to get there was unbelievable,” she told us in a phone interview Wednesday night. “You could just tell the boys were just jumping around. And when the team walked in, just everyone smiled. They knew what it meant. It kind of made everybody teary-eyed, and we got teary-eyed. Seeing the boys reunite with Jeff was just… I’m still emotional and smiling thinking about it. It makes it all worth it—all the feeling tired and work that went into getting here. It was nice.

“I just think that it gives him a little bit of energy and pep in his step—rejuvenation for this last little stretch. And it gives us a little something to get through the last stretch, too.”

Jeff said he wanted to use these final games of the season to build himself back up. He acknowledged his play hadn’t been near the level he expects of himself and said he’d been working on it and taking steps in the right direction since Martin St. Louis took over from Dominique Ducharme as coach in February.

“The first day he came in, he pulled me aside and we had a good chat about just parking the beginning part of the year and just focusing on moving forward and playing that second half,” Petry said. “He brought that confidence. He gave me that confidence. He said he’s watched a lot of games over the years I’ve played against him, and he said, ‘I know the player that you can be (and) I’m going to bring that back.’”

Petry responded with a string of his best games of the season right away but then dipped a bit before suffering the injury on Mar. 24.

Still, he posted an assist on Saturday against Toronto, another one against the Winnipeg Jets on Monday, and posted yet another and played a strong game against Columbus despite the majority of the other Canadiens struggling.

“We were flat for pretty much the whole game,” said St. Louis.

And it wasn’t just a good night for him.

“Being at warmup was special for the boys,” Julie said. “That just made everybody happy, and that made it feel like everything was right again. So, that was definitely awesome to feel that. It’s nice to see us back at a hockey rink for the game and to see the boys excited to see their dad and his friends, as they like to call them, on the ice.

“I’d say the last little bit we’ve all been really emotional. It’s gotten more emotional the longer we’ve missed each other and with him just missing the boys. It makes me emotional about how we’ve missed so many things. Even getting one little chance—and the boys think it’s cool that we came to a different arena, and maybe that’s a little new tradition we’ll start—it makes me a little bit nostalgic and a little sad as it’s not how we hoped or expected this to all happen. But I’m just thankful we could shoot down here and get to do this.”

Clearly Jeff was, too.