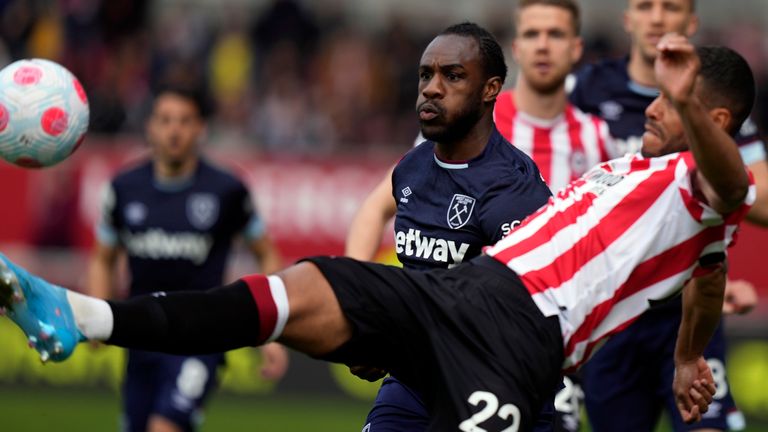 Brentford all but safe after denting West Ham

Brentford all but guaranteed another season of Premier League football after completing a first league double over West Ham in 68 years with a 2-0 victory.

After spurning a host of chances in a goalless first half, Bryan Mbeumo broke the deadlock three minutes after the break when he unerringly dispatched Ivan Toney’s precise through pass.

Mbeumo turned provider 18 minutes later, returning the favour when his hooked ball back into the six-yard box found Toney unmarked and he nodded his 12th goal of the season home.

Brentford’s fourth victory in five games lifts Thomas Frank’s side up to 13th in the Premier League on 36 points – 12 clear of the bottom three – and surely allays any lingering relegation fears.

Defeat dealt another blow to West Ham’s fading hopes of a top-four finish, and they were also dealt a potentially massive setback ahead of Thursday’s Europa League second leg against Lyon with defender Kurt Zouma was forced off injured in the first half.

Man of the Match: Ivan Toney

Brentford were still buzzing from last weekend’s thumping 4-1 win at Chelsea and Mbeumo had the game’s first effort on target when he headed Rico Henry’s cross straight at Lukasz Fabianski.

The Frenchman tested the West Ham goalkeeper against with a rasping near-post drive midway through the half and, after Zouma departed, turned a rebound onto the bar after Christian Eriksen’s corner threatened to curl under the bar before Fabianski’s last-ditch save.

West Ham were off the pace throughout and registered just a single attempt on target, with Tomas Soucek heading Vladimir Coufal’s cross straight into the arms of Bees keeper David Raya.

Mbeumo found his shooting boots three minutes after the restart when he ruthlessly dispatched Toney’s flick with a fine first-time finish past Fabianski.

And Brentford deservedly doubled their advantage on 64 minutes when Rico Henry’s cross was hooked back across goal by Mbeumo for Toney to head into the empty West Ham net.

Man of the Match – Ivan Toney

Ivan Toney has scored eight goals from 32 shots in the Premier League in 2022, after netting just four times from 36 attempts prior to the new year.

Indeed, only Heung-Min Son (9) has scored more top-flight goals since the turn of the new year than the Brentford striker (8).