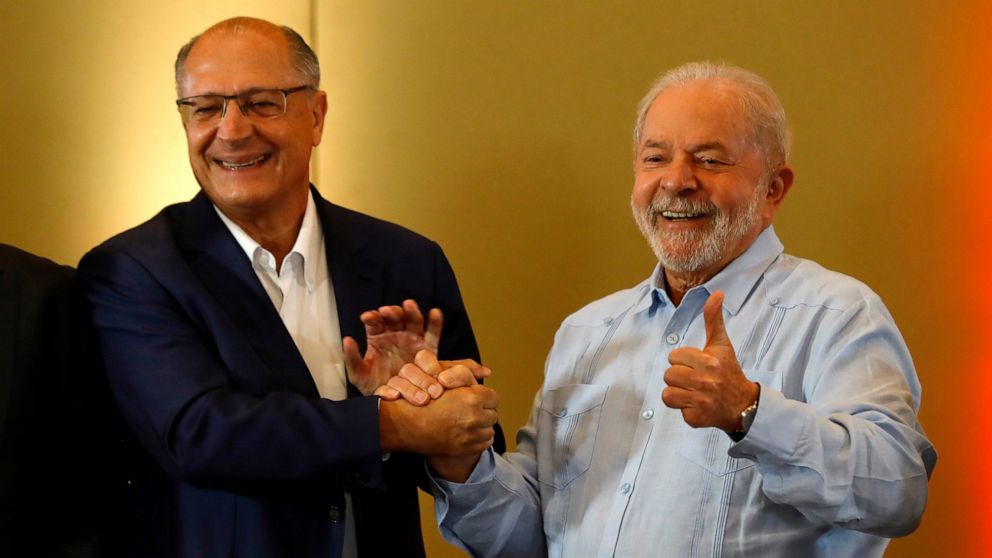 SAO PAULO — Former Brazilian President Luiz Inácio Lula da Silva said on Friday that he has chosen a past rival to be his running mate in October’s election. The pick appears to be aimed at improving the leftist’s appeal to centrist voters and shoring up his lead in early polls over incumbent President Jair Bolsonaro.

Da Silva held a public meeting at a Sao Paulo hotel with Geraldo Alckmin, a three-term governor of Sao Paulo state who ran against da Silva in the 2006 presidential elections. The selection of Alckmin depends on final approval from the executive committee of da Silva’s leftist Workers’ Party, which is widely expected to ratify the pick.

“No one has more experience to be vice president than Alckmin,” da Silva said at the event that was broadcast live. “This ticket, if confirmed, is not only to win the elections. Maybe it is easier to win the elections than the task we have ahead to recover this country.”

“We will talk to all of society: to business leaders and to working-class people,” he added.

Alckmin, 69, is a devout Catholic who worked as a country doctor in his early life. The soft-spoken politician stepped into the spotlight in 2001 when, as deputy governor, he inherited the Sao Paulo governorship and used privatizations to finance state investments. He returned to the job in 2011 and was reelected four years later.

Da Silva’s choice of Alckmin is largely symbolic, as the former governor isn’t a political powerhouse in his own right, according to Carlos Melo, a political science professor at Insper University in Sao Paulo.

“Lula (da Silva) still needs more organic relationships. There’s no broad coalition yet. What is fundamental to Lula is to get deals with centrist parties. He needs to reduce the resistance of business leaders,” Melo said by phone.

He recently joined the Brazilian Socialist Party, leaving behind the center-right Brazilian Social Democracy Party he helped found three decades ago. That departure jibed with his move away from conservative politics in the years since his 2018 presidential bid, when he was routed in the first round.

In the 2006 race, da Silva accused Alckmin and his allies of planning the near-total privatization of Brazil’s state-run companies. The former governor responded by donning a vest bearing the logos of several such companies, claiming he would instead strengthen them. Alckmin, for his part, accused da Silva and the Workers’ Party of trying to purchase a dossier containing falsehoods about his allies. Da Silva and his party denied any wrongdoing.

At the event on Friday, the two appeared to have put any bitterness behind them.

“This is not a time to be selfish,” Alckmin said alongside da Silva. “This is a time for generosity and union.”

The two have praised one another in recent weeks, with the former president saying in March that both had changed since they were adversaries. Their recently forged connection surprised many Brazilian politicians, who still remember their friction over the years.

Da Silva said on Friday the two always had a “democratic and republican” relationship.

Alckmin only garnered 5% of a first-round vote in 2018. Da Silva had intended to run and was the frontrunner in early polls, but his conviction for corruption charges removed him from the race and allowed then-candidate Bolsonaro to win a runoff vote handily.

Since then, Brazil’s top court ruled that the judge who convicted da Silva was biased and had colluded with prosecutors, clearing the way for former president to run again and seek alliances with moderates.

Although Lula holds a wide lead over Bolsonaro in preliminary polls, recent weeks have shown the percentage of people intending to vote for the far-right president creeping upwards as so-called “third-way” candidacies lost support.