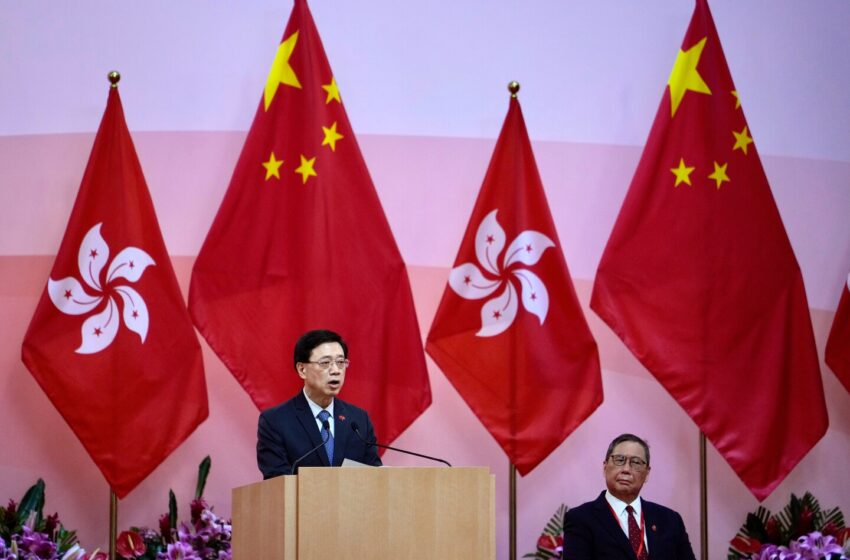 HONG KONG — John Lee was not seen as a natural leader for most of the nearly four decades he served in the Hong Kong police force.

Former colleagues described him as withdrawn, thoughtful and quiet. At lunch, Lee would eat his homemade sandwiches alone in the office, according to former officers. In a profession known for raucous camaraderie, he was serious and “not particularly pleasant,” one of Lee’s former colleagues said.

It is precisely these traits, analysts say, that make the city’s former top security officer, now 64, China’s ideal choice as Hong Kong’s next chief executive. He oversaw the crackdown against pro-democracy protesters in 2019, helped roll out the new national security law and is now trusted to follow and implement — not lead — in a territory tightly controlled by Beijing. He, so far, is the single candidate approved by China to run for the office on May 8.

Lee has a history of defending, promoting and advancing Hong Kong’s most controversial laws and appears set to further erode civil society, independent media and the scant remains of the opposition. Lee is also an official under U.S. sanctions, and his candidacy shows Beijing shrugging at outside criticism. “Image-wise … it doesn’t care,” said Ho-fung Hung, an expert on Hong Kong politics and political economy professor at Johns Hopkins University.

A revealing summary of Lee’s appeal was telegraphed this week by the pro-Beijing camp within this city. Lo Man-tuen, vice chairman of the All-China Federation of Returned Overseas Chinese wrote in a local newspaper that Beijing’s candidate “has to be a ‘man of iron’ ” who can “unflinchingly implement the national security law with no hesitation.”

Lau Siu-kai, vice president of the semiofficial Chinese Association of Hong Kong and Macau Studies, said Lee’s biggest strength is his “composure and courage” during the unrest in 2019. Without “entanglement of vested interest groups” it will be “conducive [for Lee] to fulfill responsibilities towards the central people’s government,” Lau said in an interview this week.

From inspector to Hong Kong’s No. 2

In 1977, Lee, then 20, joined the Hong Kong police force then under British rule as a probationary inspector. He rose through the force, becoming deputy commissioner in 2010. He was passed over for commissioner, several former colleagues said. In 2012, Lee joined the government under hard-line former chief executive Leung Chun-ying.

In 2017, Chief Executive Carrie Lam promoted Lee to secretary for security — a move that set him on a trajectory to enforce and aid China’s ambitions to rein in independent-minded Hong Kong. He later visited Xinjiang and reported to lawmakers that all counterterrorism measures he saw there were “humane” and experiences “worth studying” for Hong Kong. (Human rights violations against the Uyghur minority there are widely documented, and the State Department has determined that they constitute genocide.)

In early 2019, Lee helped Lam promote a controversial bill that would allow extraditions from Hong Kong to mainland China. The legislation prompted anti-government protests that drew millions of people, the largest challenge to the Communist Party on Chinese soil since the 1989 Tiananmen Square demonstrations. Lee oversaw the crackdown where officers were seen to repeatedly violate internal rules on use of force.

No officer or government official has been held responsible for wrongdoing or investigated with regards to the protests. In August 2020, the U.S. Treasury Department imposed sanctions on Lee, Lam and nine other Hong Kong and mainland officials for “restricting the freedom of expression or assembly of the citizens of Hong Kong.”

Last June, Beijing appointed Lee as the new chief secretary, Hong Kong’s second-highest political position. He became the first police officer to assume the role. A representative from the chief secretary’s office said it could not comment on Lee’s behalf since he resigned to run for chief executive.

The civil servant vs. the officer

By selecting Lee, Beijing has effectively sidelined Hong Kong’s civil service. Two of Hong Kong’s four chief executives, including Lam, rose up from within the service, a legacy of British colonial rule that for decades formed the backbone of government and marked a key difference between Hong Kong and China. That civil service structure made Hong Kong appealing to Western businesses and cemented its status as a financial center.

Selecting a former police officer instead of a civil servant underscores that “Beijing believes candidates from the disciplined services are more dependable, as they exhibit more political loyalty,” said Ivan Choy Chi-keung, political scientist at the Chinese University of Hong Kong, referring to institutions such as police, corrections and fire services.

Lam leaves behind a legacy of a far more polarized society. Critics say Lam’s failures in Hong Kong are a product of arrogance and pride and an inability to listen to constituents. With Lee, personality is secondary.

“It is not important whether [he] is down-to-earth, or humble or not,” said Kenneth Chan Ka-lok, a former pro-democracy lawmaker and an associate professor at Hong Kong Baptist University. “What matters most is that Lee is a cadre appointed by Beijing … As long as he can serve his master well, HK’s pro-establishment side will not have a voice that deviates far from his.”

Hung of Johns Hopkins University said he expected the “gradual erosion of professionalism spirit in Hong Kong in all quarters of society will be continuing or even speeding up.”

“John Lee or not, I think the direction is quite clear,” he said.

Hong Kong, under the terms of its 1997 handover to China, was promised autonomy with “Hong Kong people ruling Hong Kong.” Representative elections are the end-goal under the Basic Law, Hong Kong’s mini constitution. This race, however, only has one real candidate.

As in previous years, the next chief executive will be selected in May by a handpicked panel, composed of about 1,500 political and business elites known as the election committee. There is only one candidate approved by Beijing, according to Lau and local media citing sources.

The opposition is in jail. Hong Kong authorities want its ‘patriots’-only election to look legitimate.

Last year, Beijing overhauled Hong Kong’s electoral system and specified only “patriots” — those loyal to the Communist Party — could run. The changes reduced the amount of elected seats in the legislature, tightened rules on who could qualify and changed the representation of the committee that picks the chief executive.

In effect, the moment Lee declared his candidacy this week, the new rule guaranteed that he would be sworn in on July 1. That is also the 25th anniversary of Hong Kong’s handover, and the halfway point of the “one country, two systems” arrangement. “Beijing wants to send the message that Hong Kong will never be able to deviate from the tracks [it] designed,” Chan, the former lawmaker, said.

On Wednesday, Lee offered a preview of his approach. In a six-minute announcement of his candidacy, he said the opportunity “to serve the people of Hong Kong is a glory.”

“I shall inform you of my next move in detail,” he said, then walked from the podium immediately, leaving a pack of reporters trailing behind.