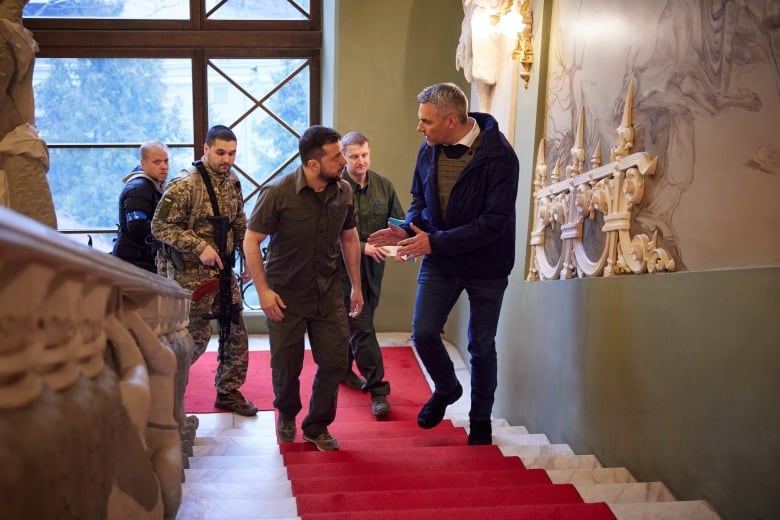 Ukrainian troops have repulsed several Russian assaults in the country’s east, the focus of a new offensive by the invading forces, British intelligence said on Monday, while Austria’s leader planned to meet Russian President Vladimir Putin and call for an end to the conflict.

Austrian Chancellor Karl Nehammer said he would meet Putin on Monday in Moscow for the Russian leader’s first face-to-face meeting with a European Union counterpart since Russia’s invasion began on Feb. 24.

Austria, which is not a member of NATO, is a member of the European Union and has backed the 27-nation bloc’s sanctions against Russia.

“We are militarily neutral, but (have) a clear position on the Russian war of aggression against #Ukraine,” Nehammer wrote of Austria on Twitter. “It must stop! It needs humanitarian corridors, ceasefire & full investigation of war crimes.”

Nehammer’s planned meeting with Putin follows a trip on Saturday to Kyiv, where he met Ukrainian President Volodymyr Zelensky.

Meanwhile, Zelensky kept up his tireless campaign to generate international support and rally his countrymen, warning the coming week would be important and tense.

“Russia will be even more afraid. It will be afraid to lose. It will fear that the truth will have to be acknowledged,” Zelensky said in a late night video address.

“Russian troops will move to even larger operations in the east of our state. They may use even more missiles against us, even more air bombs. But we are preparing for their actions. We will answer.”

In an address to South Korea’s parliament by video link, Zelensky said Russia was concentrating tens of thousands of soldiers for the next offensive and asked Seoul for any military aid it could provide.

Russian forces have abandoned their attempt to capture the capital Kyiv, for now at least, but are redoubling their efforts in Ukraine’s east. Britain’s Defence Ministry said Russian shelling continued in the Donetsk and Luhansk regions.

But Ukrainian forces had beaten back several assaults and destroyed Russian tanks, vehicles and artillery equipment, it said in its regular intelligence bulletin.

Air raid sirens blared out across Ukraine early on Monday.

“It is likely that the enemy, in order to disrupt the supply of goods to the places of hostilities, will continue to strike at transport infrastructure facilities in Ukraine in order to destroy or disable them,” the general staff of Ukraine’s armed forces said.

Russian forces were continuing their offensive to establish full control over the southern city of Mariupol, seeking to storm an iron and steel plant and the seaport, it said.

Russia might also carry out provocative actions in the Transnistrian region of the Republic of Moldova in order to accuse Ukraine of aggression against a neighbouring state, the general staff said, without providing evidence.

Serhiy Gaidai, the governor of the Luhansk region in Ukraine’s east, said infrastructure including food stores had been targeted by Russian “informants,” also without providing evidence. Reuters could not confirm the claims.

Russia’s invasion has forced about a quarter of Ukraine’s 44 million people from their homes, turned cities into rubble and killed or injured thousands.

It has failed to take any major cities, but Ukraine says Moscow has been gathering its forces in the east for a major offensive and has urged people to flee.

Ukrainian village of Andriivka grapples with its trauma

WARNING: This video contains graphic content. Like many in newly liberated areas near Kyiv, people in the village of Andriivka are just starting to process their traumatic experiences while living under Russian occupation. 3:03

A series of powerful explosions was heard in Ukraine’s northeastern city of Kharkiv and in Mykolaiv, near the Black Sea in the southern part of the country, Ukrainian media reported on Sunday.

Earlier, missiles destroyed the airport in the city of Dnipro, said Valentyn Reznichenko, governor of the central Dnipropetrovsk region.

Russia’s Defence Ministry said high-precision missiles had destroyed the headquarters of Ukraine’s Dnipro battalion in the town of Zvonetsky.

In a later statement, the ministry said Russian sea-launched missiles had on Sunday destroyed S-300 anti-aircraft missile systems, which had been supplied to Ukraine by a European country. The systems were concealed in a hangar on the outskirts of Dnipro in central Ukraine, it said.

Reuters could not confirm the reports.

Since Russia invaded, Zelensky has appealed to Western powers to provide more defence help, and to punish Moscow with tougher sanctions including embargoes on its energy exports.

U.S. national security adviser Jake Sullivan told ABC News: “We’re going to get Ukraine the weapons it needs to beat back the Russians to stop them from taking more cities and towns.”

Zelensky said he had confidence in his own armed forces but “unfortunately I don’t have the confidence that we will be receiving everything we need” from the United States.

“They have to supply weapons to Ukraine as if they were defending themselves and their own people,” Zelensky said in an interview aired on CBS’s 60 Minutes. “They need to understand this. If they don’t speed up, it will be very hard for us to hold on against this pressure.”

Zelensky said earlier on Twitter he had spoken on the phone with German Chancellor Olaf Scholz about additional sanctions, as well as more defence and financial support for his country. Zelensky also discussed with Ukrainian officials Kyiv’s proposals for a new package of EU sanctions, his office said.

The EU on Friday banned Russian coal imports among other products, but has yet to touch oil and gas imports from Russia.

Ludmila Zabaluk, head of the Dmytriv Village Department, north of the capital Kyiv, said dozens of civilian bodies were found in the area.

“There were more than 50 dead people. They shot them from close distance. There’s a car where a 17-year-old child was burned, only bones left. A woman had half her head blown off. A bit farther, a man lying near his car was burned alive.”

Reuters could not immediately confirm the reports.

People in recently liberated parts of Ukraine near Kyiv are reconnecting their lives and links to the rest of the country, even as the front lines of Russia’s invasion moves east to the Donbas region. 2:36

Moscow has rejected accusations of war crimes by Ukraine and Western countries. It has repeatedly denied targeting civilians in what it calls a “special operation” to demilitarize and “denazify” its southern neighbour. Ukraine and Western nations have dismissed this as a baseless pretext for war.

The World Bank on Sunday forecast the war would cause Ukraine’s economic output to collapse by 45 per cent this year, with half of its businesses shuttered, grain exports mostly cut off by Russia’s naval blockade and destruction rendering economic activity impossible in many areas.

The bank forecast Russia’s GDP would contract by 11.2 per cent this year due to punishing Western sanctions.