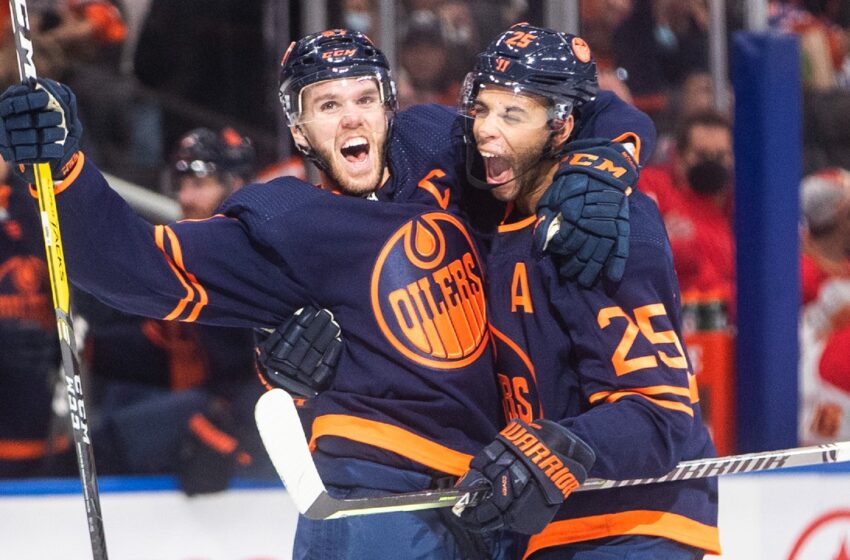 As playoffs approach, defensively-sound Oilers are peaking at right time

Six straight wins and in control of second place in the Pacific. Who’d have seen this coming two months ago for Edmonton?

If how your team is playing is more important than what seed it is when the playoffs begin — and it is, as long as you’re a Top 8 team — then the suddenly defensively sound Edmonton Oilers are peaking at the right time.

In a battle for second place in the Pacific Division, Edmonton walked into Los Angeles and beat the Kings 3-2 in regulation to move three points clear of L.A. with a game in hand. In a game they never trailed, it was Edmonton’s sixth straight win — and the first time in franchise history they’ll fly home from a California road trip on Friday morning having swept the Ducks, Sharks and Kings.

It seems like a long time since that 9-5 loss in Calgary, doesn’t it?

“We had a tough game there a few weeks ago in Calgary,” began head coach Jay Woodcroft, “where we gave up way more goals than we wanted to give up.

“I just look at this road trip: we gave up four goals in three games and two of them were even strength. So that’s a good sign for us, as we navigate our way down the stretch here.”

As the playoffs approach, and five-on-five hockey becomes the currency on which teams can afford to advance, the Oilers’ even-strength game has been excellent. They’ve allowed two or less goals in four of their past six games, a sign that good defensive structure is being backed by NHL calibre goaltending.

Suddenly Mike Smith has taken over the No. 1 job, going 6-0-1 in his last seven starts. “Numbers don’t lie,” said Evan Bouchard, who had the first three-point game of his career.

Smith’s puck-handling skills make the Oilers infinitely harder to play against, and he had another impactful night on Thursday. Coming off a game where he set up Connor McDavid’s overtime winner with a lovely stretch pass, Smith made a deft, 10-foot pass to Duncan Keith that most goalies would never have pulled off.

The puck went from Keith, through each of the four other skaters, and ended up on Warren Foegele’s tape for a goal off a lovely feed by Derek Ryan. Then, in the final few minutes with the Oilers nursing a 3-2 lead, Smith repeatedly gathered up Kings dump-ins and put the puck right on the tape of an Oilers defenceman for easy zone exits, thwarting L.A.’s offence.

We know — Smith is old at 40, and staying healthy is always an issue. But when he’s stopping the puck as well as he is right now, and playing it as well or better than any other ‘tendy in hockey, he is truly a weapon.

“I don’t think confidence is anything tangible. I think you earn the right to feel confident,” Woodcroft said. “And for Mike, he’s earned that feeling because he’s put the work in. He’s put the work in in practice. His puck-moving abilities are elite, but he’s made some big saves for us at the right times.”

If Smith has found his two-way game, he’s coming in right behind captain Connor McDavid, who opened the scoring, added an assist, and was a demon defensively as the Kings tried to tie the game. He’s been a plus player in all six wins since that Calgary game, going plus-8.

McDavid’s plus-22 is Top 15 in the NHL, and his 53.8 per cent faceoff percentage a career best. And, of course, he’s on his way to another Art Ross Trophy.

Like it or not, McDavid has had his Yzerman moment and his game is better off for it. So are the Oilers.

“He’s driving us forward with his offence, sure,” said Woodcroft. “But he’s also driving us with his attention to detail on the defensive side of things. And when your captain does that — when the leading scorer in the National Hockey League commits to playing like that — it resonates with the rest of the group. It becomes a contagious type attitude.”

During his current 15-game points streak (his second this season), McDavid’s has 12 multi-point games for 29 points.

Meanwhile, young Bouchard blasted home a key goal and had two apples. And perhaps even more encouraging, he was assertive defensively on a plus-3 night. Playing with Duncan Keith is hastening the development of the young defenceman, an intangible that will bear fruit for years after Keith is long gone.

Bouchard knows he can score with the bomb he has from the point, and he has always put up points. But just like the team around him, if Bouchard’s defensive game can mature, then individual success can turn into team success.

“That’s a big focus of ours going into playoffs,” said Bouchard, who collects a $212,000 bonus for scoring his tenth goal. “You’ve got to be really solid defensively, and it helps when our goaltenders are standing on their heads, and that’s what they’ve been doing recently.”