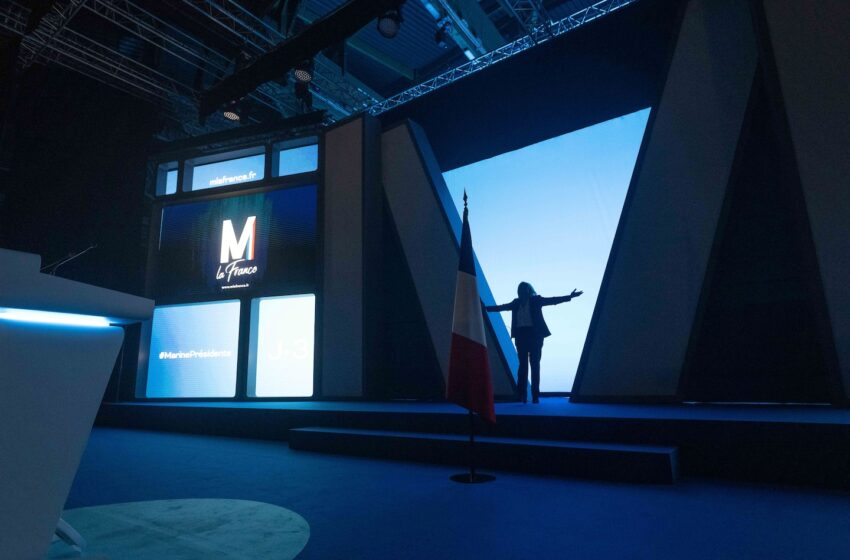 As campaigning ends, outcome of France’s presidential vote is uncertain PARIS — Leading candidates for the French presidency staged their final campaign rallies on Thursday, three days before a vote that appears increasingly likely to result in a tight runoff between President Emmanuel Macron and far-right leader Marine Le Pen.

Macron is still leading in polls of voter intent, but the gap between him and Le Pen has shrunk to 5 or 6 percentage points, for both the first round and a presumed runoff between them. The finish order could pivot on voter turnout.

“I beg you to go vote,” said Le Pen, addressing voters Thursday night in the southern French city of Perpignan, where she echoed a slogan from Britain’s successful Brexit campaign and urged her supporters to “take back control!”

Only the two top candidates in Sunday’s first round of voting will make it to the decisive runoff on April 24, with polls currently showing that Macron and Le Pen are the most likely to advance, even though a surprise surge of far-left candidate Jean-Luc Mélenchon remains a possibility.

Explainer: What to know about the French presidential election of 2022

Russia’s invasion of Ukraine initially lifted Macron in the polls, as Europe’s sense of its security was shaken. But six weeks on, support for Macron has settled back to around where it was before, while Le Pen has benefited from the fading of her main competitor on the far-right, Éric Zemmour.

“What was impossible two weeks ago is just improbable today,” said Vincent Martigny, a political scientist at the University of Nice. “On paper, Macron should be reelected, but that’s not a given anymore.”

Macron, 44, barely did any campaigning, instead focusing on the coronavirus pandemic and then on Russia’s war. A politician known for big ideas and big speeches, Macron announced his run for a second term in an unspectacular letter. His first major campaign rally — where he addressed 30,000 people in a stadium on the outskirts of Paris last Saturday — was also his last mass campaign event before this weekend’s vote.

“He completely overestimated his capacity to be reelected without having to convince that a second mandate would be important. He’s really paying the price of this non-campaign,” Martigny said.

Though it is not unusual for French presidential incumbents to avoid the campaign trail, Macron’s absence has been notable. He rejected invitations to pre-election debates with other candidates, arguing that his predecessors never did them ahead of the first round. His team has relied on government ministers to campaign on his behalf.

At a campaign event in central Paris on Thursday evening, French Defense Minister Florence Parly cited the reasons she had supported Macron early on, talking about his “optimism” and willingness to “create something new.” But she also cautioned that the first round “is not at all won.”

The leading candidate on the left, Jean-Luc Mélenchon, 70, has put interactions with voters at the core of his months-long campaign, even appearing as a hologram projection at parallel rallies in 11 cities across France earlier this week.

Since losing to Macron in the 2017 runoff, Le Pen, 53, has spent the intervening years seeking to moderate her image. She continues to advocate radical proposals on various issues — on Thursday she vowed to issue fines to Muslims who wear headscarves in public. But she has also adapted some of her positions. She no longer campaigns for France to leave the European Union, for example.

Her change in rhetoric has meant that some of Macron’s talking points that proved effective against Le Pen in 2017 — including his strong support for the E.U. — aren’t working as well anymore.

Macron is credited in some circles for programs that protected French workers from the worst economic impacts of the pandemic and have helped the French economy to recover since. But concerns over the rising cost of living — amplified as a side effect of European sanctions on Russia — have topped the agenda of voters in the final stretch of campaigning. And polls suggest that voters don’t give Macron an advantage over Le Pen on the question of which candidate is most attuned to those concerns.

On Thursday, Le Pen doubled down on her pitch as a more moderate and electable version of herself, saying on French radio that she would be willing to appoint leftist politicians to her government. At her final rally in Perpignan, which elected a far-right mayor in 2020, she called for “unity, as an antidote to the multiple fractures of our country.”

Macron’s supporters, meanwhile, argue the incumbent has proven himself as a versatile crisis manager, during both the pandemic and the war in Ukraine.

Enzo Benoit, a 21-year old pro-Macron activist who was present at Thursday evening’s event in Paris, acknowledged that there is less energy in the campaign this year than five years ago, but said the “context is very, very different.”

“It not an election, but a reelection campaign,” he said.

At the same time, Macron, who ran as an anti-establishment candidate in 2017 and was elected as France’s youngest president, is proving less popular as part of the establishment. The defining feature of his pitch last time — his professed ability to transcend partisan divides — may also be his biggest weak spot in this campaign.

He has disappointed large parts of the left-leaning electorate by shifting to the right on issues such as immigration and national security. Polls suggest some left-leaning voters may choose to abstain from the election, even if it means a far-right victory.

Mélenchon, a far-left politician who ran for president unsuccessfully in 2017, remains the only candidate among France’s divided left who could realistically make it into the Élysée Palace. His team is hoping for a last-minute surge in the polls, and high abstention rates among Le Pen’s voters.

Addressing his supporters in Lille and as a hologram across France on Tuesday, he called for the country “to rise to the challenge humanity faces in climate change,” attacking Macron’s track record and Le Pen’s proposals.

According to some polls, almost a third of far-left voters would support far-right candidate Le Pen in a runoff with Macron. That inclination reflects similarities between Le Pen’s and Mélenchon’s economic platforms, but also the level of hostility toward Macron from some parts of the electorate.

But most of Le Pen’s voters in a second round would likely come from the right of the political spectrum, where she’s competing against center-right leader Valérie Pécresse and far-right politician Zemmour, both polling around 10 percent.

At rallies on Thursday night, the two candidates made their final attempts to win over voters. For Pécresse, it may also be the last chance to hold together the center-right Republicans party, which may be on the brink of collapse.

Speaking in Lyon on Thursday night, Pécresse defiantly told her supporters that they would still prove all “surveys, pollsters, commentators” wrong.

But Martigny, the political scientist, said the expected collapse of what remains of the established center-right and center-left parties, and the rise of radical wings, is likely to cause a political earthquake on Sunday — no matter the order of candidates.

“Any configuration we know of is going to be a complete mess,” he said. “All the traditional forces will be on the ground. The entire (political) landscape will be in ashes.”