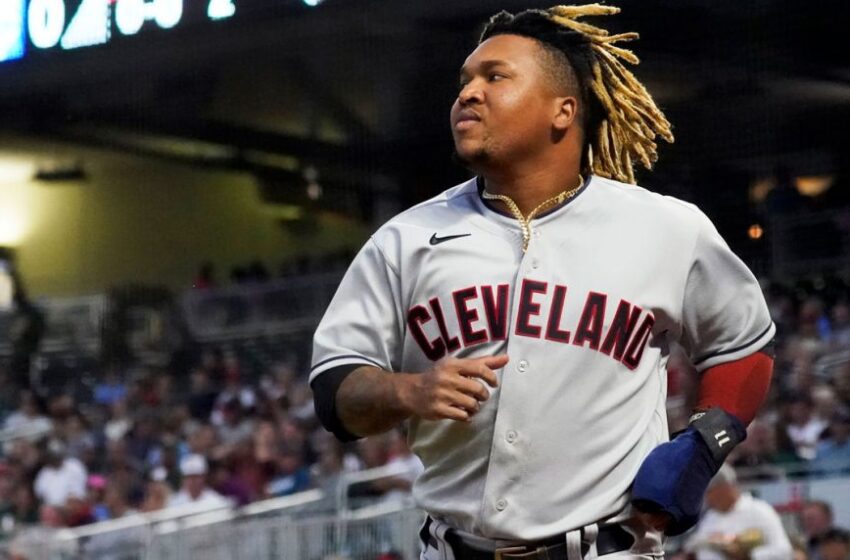 CLEVELAND — Jose Ramirez forced the Guardians to go deep into their pockets.

The All-Star third baseman agreed to a $124 million, five-year contract on the eve of opening day with Cleveland, a record-setting deal for a franchise that hasn’t been able to swing with baseball’s big spenders over the years.

Ramirez’s deal runs through the 2028 season, a person familiar with the negotiations told The Associated Press on Wednesday. Ramirez still must take a physical and numerous other details need to be finalized before the contract is official, said the person who spoke on condition of anonymity.

The deal includes a full no-trade clause and is the biggest in team history, more than doubling the $60 million committed to slugger Edwin Encarnacion five years ago.

It will be baseball’s 16th contract of $100 million or more since the end of the World Series.

The Guardians open the 2022 season — their first game since changing their name — in Kansas City on Thursday, and they’ll start it knowing Ramirez will be staying at third and batting third for the next several years.

“An absolute grinder on the field,” said pitcher Shane Bieber, who will start the opener. “Plays with his heart and soul out there. Blood sweat and tears. It’s just a guy that as a pitcher you stand on the mound and you look over your right shoulder and it’s a feeling of comfort knowing he’s there giving his all each and every play and he’s invested each and every inning and pitch and game.”

The team and Ramirez’s representatives had been in talks about a deal for weeks at training camp in Arizona. The 29-year-old Ramirez had expressed a desire to finish his career with Cleveland, which signed him as a teenager in the Dominican Republic.

After stalling, negotiations intensified the past two days before the Indians broke camp as rumors surfaced about a possible trade involving Ramirez. The Guardians went outside their normal comfort zone, but will now have Ramirez for seven more seasons.

“He talks with his play on the field, but to have him in the clubhouse and to continue to have him for the foreseeable future is important to me, the rest of the team and to him and the front office,” Bieber said. “Glad he’s staying.”

So is manager Terry Francona.

“We love Jose being the leader of our ballclub and love him representing us in any way — whether it’s at third, on the bases, in the batter’s box, as a teammate,” he said on a Zoom call from Kansas. “He fills all the checks in the box. So needless to say, we’re pretty big fans of Jose.”

Since breaking in with Cleveland in 2013, Ramirez has blossomed into one of baseball’s best all-around players, one capable of impacting the game with his bat, glove and on the bases, where he usually loses his helmet while hustling to the next base.

Cleveland owner Paul Dolan has long been criticized for not spending on players as the Guardians have almost served as a feeder to the game’s bigger markets with stars such as Francisco Lindor, Manny Ramirez, CC Sabathia and Cliff Lee either being traded or leaving as free agents because the team couldn’t afford to keep them.

But in the past few days, the Guardians locked up Ramirez and agreed to a five-year contract with closer Emmanuel Clase.

Signing Ramirez doesn’t address all of Cleveland’s needs, but with him anchoring their lineup and a solid starting rotation featuring Bieber, the Guardians should be able to stay in contention in the AL Central.

Ramirez had two years left on a five-year, $26 million contract he signed in 2016. That deal included two team options — $12 million in 2022 and $14 million next season — that made him the highest-paid player on Cleveland’s roster.

A three-time All-Star, Ramirez batted .266 with 36 homers and 103 RBIs last season. He’s finished in the top three in MVP voting three times in the past five seasons.

The Guardians signed Ramirez in 2009. He was brought up as a shortstop, but moved to third to make room for Lindor, who became unaffordable and was traded to the New York Mets before last season.

NOTES: Amed Rosario, who started 119 games at shortstop last season, will be in left field for the opener with rookie Steven Kwan in right. Francona is confident Rosario will continue to improve with experience. “He’s quick enough and athletic enough,” Francona said. “We’re not trying to get him to reinvent his arm action or things like. He’ll just play the game. He’s a good baseball player, so I think we’ll just try to get him to play baseball.”