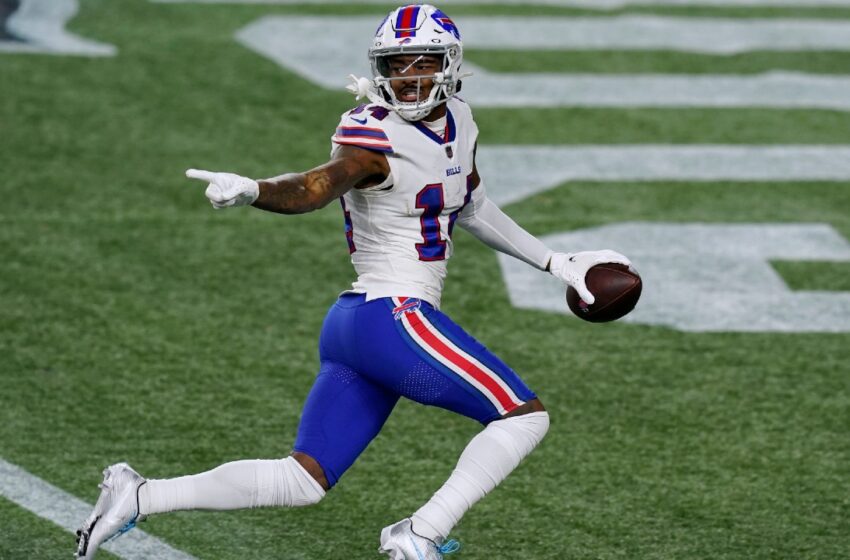 The fifth-round draft pick who blossomed into one of the NFL’s top playmakers after being traded by Minnesota to Buffalo two years ago agreed to a four-year contract extension worth $96 million, a person with direct knowledge of the deal told The Associated Press on Wednesday.

The person spoke on the condition of anonymity because the contract has not yet been signed. The agreement was first reported by ESPN earlier in the day.

The 28-year-old Diggs had two years remaining on his current contract, with the extension locking him up through the 2027 season.

Diggs celebrated the agreement on his Twitter account by posting a video clip from the movie “The Wolf of Wall Street,” in which actor Leonardo DiCaprio announces “I’m not leaving.”

The agreement represents the dynamic spark Diggs has provided to what’s become a pass-first Bills offence, and the instant chemistry he’s established with quarterback Josh Allen.

And it validates the faith general manager Brandon Beane placed in Diggs by acquiring him for a first-round draft pick 25 months ago.

Though productive during his five seasons in Minnesota, Diggs was mostly a secondary option behind receiver Adam Thielen and in an offence that leaned heavily on the running attack.

Diggs thrived immediately in Buffalo upon taking over the lead role among a group of receivers rounded out by John Brown and Cole Beasley.

In 2020, Diggs was part of an offence which set numerous single-season franchise passing and scoring records, while he became Buffalo’s first player to lead the league in both catches (127) and yards (1,535).

Last season, he finished eighth in the NFL with 1,225 yards receiving, while also leading the Bills with 103 catches and 10 touchdowns.

Overall, his 230 catches in Buffalo are the most by an NFL player in his first two seasons with a team, and he’s the first Bills player to top 100 catches in consecutive seasons.

Diggs also solidified his role as an influential team leader in being selected as one of Buffalo’s offensive captains last season.

Diggs was honoured by the designation and considered it rewarding in his desire to break from his mercurial past in Minnesota by focusing on becoming more of a team-first player upon his arrival in Buffalo.

“It means even more now just as far as being acknowledged by your peers,” Diggs said in September by noting he had previously never been a captain going back to high school.

“The fact that they trust you in the biggest moments and they trust you on a daily basis that you’re going to do the right thing on and off the field, yeah, I was happy.”

Locking up Diggs is the latest splash by Beane to upgrade and maintain the core of a roster which has made the playoffs in each of the past three seasons. The Bills lost to Kansas City in an AFC divisional playoff in January a year after also losing to the Chiefs in the AFC championship game.

Allen is under contract through the 2028 season after signing a six-year, $258 million contract extension last summer. The Bills improved their pass rush last month by signing Von Miller to a six-year deal in free agency.

Upon signing Miller, Beane was already turning his attention to reaching a long-term agreement with Diggs. Beane was being proactive in making sure to keep his top receiver happy in light of the escalating rate of salaries at the position this offseason.

Diggs’ extension is in line with contracts signed by two of the NFL’s top receivers this offseason. Tyreek Hill signed a $120 million, four-year contract extension upon being traded from Kansas City to Miami.

In being traded from Green Bay to Las Vegas, Davante Adams signed a five-year contract which averages $28.5 million and includes $67.5 million guaranteed.