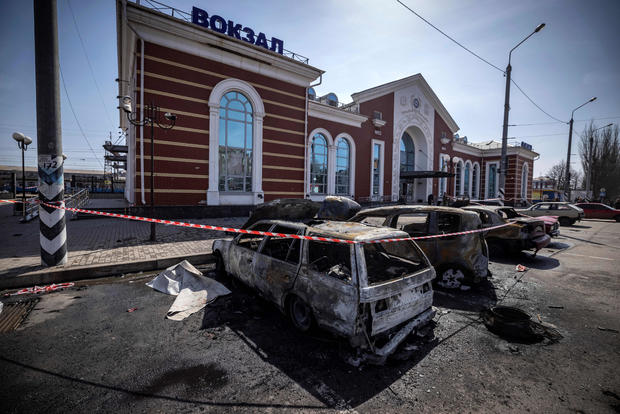 Ukrainian President Volodymyr Zelenskyy said he wants a tough global response after a missile struck a train station packed with civilians trying to escape an imminent Russian offensive, killing at least 52 people. Zelenskyy’s voice rose in anger during his nightly address late Friday, when he said the strike on the Kramatorsk train station in eastern Ukraine amounted to another war crime for an international tribunal to consider.

Five children were among the dead, and dozens of people were severely injured, Ukrainian officials said.

“All world efforts will be directed to establish every minute of who did what, who gave what orders, where the missile came from, who transported it, who gave the command and how this strike was agreed,” the president said.

Russia denied it was responsible for the strike and accused Ukraine’s military of firing the missile as a false-flag operation so Moscow would be blamed for civilian slayings. A Russian Defense Ministry spokesman detailed the missile’s trajectory and Ukrainian troop positions to bolster the argument.

Ukraine’s state railway company said in a statement that residents of the country’s contested Donbas region, where Russia has refocused its forces after failing to take over the Ukrainian capital, Kyiv, could flee through other train stations on Saturday.

“The railways do not stop the task of taking everyone to safety,” the statement on the messaging app Telegram said.

Photos taken after Friday’s missile strike showed corpses covered with tarpaulins, and the remnants of a rocket painted with the words “For the children” in Russian. The specific Russian phrase has a meaning closer to “on behalf of children” or “in retaliation for an attack on children,” rather than “aimed at children.”

The attack came as workers elsewhere in the country unearthed at least 67 bodies from a mass grave near a church in Bucha, a town near Kyiv, where graphic evidence of dozens of killings emerged following the withdrawal of Russian forces. Russia has falsely claimed that the scenes in Bucha were staged.

Mayor Anatoliy Fedoruk has said investigators found at least three sites of mass shootings of civilians and were still finding bodies in yards, parks and city squares — 90% of which were victims who had been shot.

Some of the grisliest evidence so far has been found in Bucha and other towns around Kyiv, from which Russian President Vladimir Putin’s troops pulled back in recent days. An international organization formed to identify the dead and missing from the 1990s Balkans conflicts is sending a team of forensics experts to Ukraine to help put names to bodies that might otherwise remain anonymous amid the fog of war.

In an excerpted interview with CBS’ “60 Minutes” that aired Friday, Zelenskyy cited communications intercepted by the Ukrainian security service as evidence of Russian war crimes.

“There are (Russian) soldiers talking with their parents about what they stole and who they abducted. There are recordings of (Russian) prisoners of war who admitted to killing people,” he said. “There are pilots in prison who had maps with civilian targets to bomb. There are also investigations being conducted based on the remains of the dead.”

German government officials would not confirm or deny the report, but two former German ministers filed a war crimes complaint Thursday. Russia has denied that its military was involved in war crimes.

After failing to occupy Kyiv in the face of stiff resistance, Russian forces have set their sights on the Donbas, the mostly Russian-speaking, industrial region where Moscow-backed rebels have been fighting Ukrainian forces for eight years and control some of the area.

Although the Kramatorsk train station is in Ukrainian government-controlled territory in the Donbas, the separatists, who work closely with Russian troops, blamed Ukraine for the attack.

Western experts, however, dismissed Kremlin spokesperson Dmitry Peskov’s assertion that Russian forces “do not use” Tochka-U missiles, the type that hit the station. A Western official, speaking on condition of anonymity to discuss intelligence, told the Associated Press that Russian forces have used the missile — and that given the strike’s location and impact, it was likely Russia’s.

Justin Bronk, a research fellow at the Royal United Services Institute in London, pointed to other occasions when Russian authorities have tried to deflect blame by claiming their forces no longer use an older weapon “to kind of muddy the waters and try and create doubt.” He suggested Russia specifically chose the Tochka-U because Ukraine also possesses them.

Ukrainian authorities and Western officials have repeatedly accused Russian forces of committing atrocities in the war that began with Russia’s Feb. 24 invasion. A total of 176 children have been killed in Ukraine since the start of the war, while 324 more have been wounded, the country’s Prosecutor General’s Office said Saturday.

Ukrainian authorities have warned they expect to find evidence of more mass killings once they reach the southern port city of Mariupol, which is also in the Donbas and has been subjected to a monthlong Russian blockade.

A senior U.S. defense official who spoke on condition of anonymity to discuss internal military assessments said Friday that the Pentagon believes Russia has lost between 15% and 20% of its combat power overall since the war began. While some combat units are withdrawing to be resupplied in Russia, Moscow has added thousands of troops around Ukraine’s second-largest city, Kharkiv, in the country’s east, the official said.

Ukrainian officials have almost daily pleaded with Western powers to send more arms, and to further punish Russia with sanctions, including the exclusion of Russian banks from the global financial system and a total European Union embargo on Russian gas and oil.

In Kharkiv, Lidiya Mezhiritska stood in the wreckage of her home after overnight missile strikes turned it to rubble.

“The ‘Russian world,’ they say,” she said, wryly invoking Putin’s nationalist justification for invading Ukraine. “People, children, old people, women are dying. I don’t have a machine gun. I would definitely go (fight), regardless of age.”