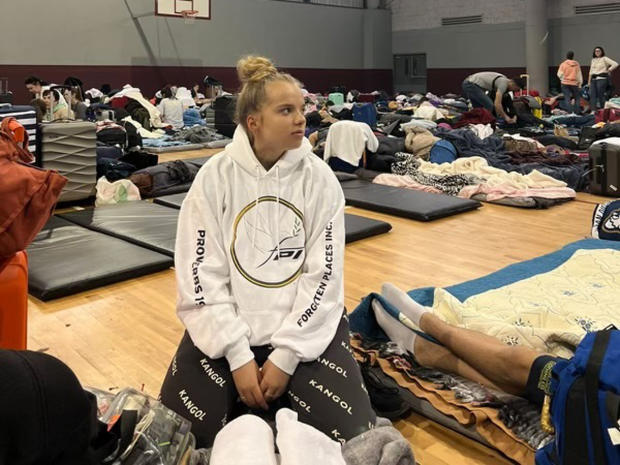 A 17-year-old Ukrainian girl remained in U.S. government custody on Saturday after being denied immediate entry into the country by authorities along the southern border, where a growing number of Ukrainians have been traveling in hopes of entering the U.S., her caregivers told CBS News.

On Wednesday evening, Yelyzaveta, 17, who was training to be a missionary in Mexico, traveled to the San Ysidro U.S. border crossing in Southern California alongside Alina Dolinenko, 21, a fellow missionary trainee from Ukraine. Unable to return to war-torn Ukraine, Yelyzaveta and Dolinenko hoped to enter the U.S. to live with a Maryland resident who sponsored their missionary program in Mexico.

U.S. border officials have been allowing hundreds of Ukrainians to enter the country per day through the San Ysidro crossing after being instructed in early March to consider exempting those with Ukrainian passports from pandemic-era restrictions currently blocking other migrants from seeking asylum.

But when they were processed at the San Ysidro port of entry, Dolinenko said U.S. border officials told them that Yelyzaveta could not be immediately allowed to enter the country because she was a minor and was not traveling with her parents or legal guardians.

U.S. border officials told them that they would take Yelyzaveta “away for an indefinite period of time, because she has no right to cross without her parents,” said Dolinenko, who was allowed into the U.S. “She cried a lot.”

A 2008 law requires U.S. border officials to temporarily hold undocumented children who are processed without their parents or legal guardians until they can transfer them to shelters overseen by the Department of Health and Human Services (HHS). The law generally requires this transfer to occur within 72 hours.

The law was designed to protect migrant children from violence and trafficking, and has mainly been applied to minors from Central America, who make up the vast majority of unaccompanied youth in HHS care.

CBS News is using only Yelyzaveta’s first name because she is a minor. Her exact whereabouts were unknown on Saturday. Sharon Fletcher, the Maryland resident who was hoping to provide housing to Yelyzaveta and Dolinenko, said Yelyzaveta told her during a two-minute call on Thursday that she remained in U.S. Customs and Border Protection (CBP) custody.

“She just burst into tears, saying, ‘I don’t want to be here,'” Fletcher told CBS News. “She doesn’t want to be in that place. She wants to be free.”

Representatives for CBP and the Department of Homeland Security did not respond to questions about Yelyzaveta’s processing and whereabouts. HHS did not immediately respond to a request for comment. A U.S. official said that Yelyzaveta was not in an HHS shelter as of Friday evening.

Fletcher runs a non-profit organization called Forgotten Places, which she said sponsors a program called Youth With A Mission that trains young Christian missionaries across the world, including in Mexico. Yelyzaveta arrived in Mexico in January to join Youth With A Mission, Fletcher said.

After the war in Ukraine started, Fletcher said she told Yelyzaveta and Dolinenko that she would host them in her Maryland home, noting that Yelyzaveta does not have family in the U.S.

Fletcher said Yelyzaveta has not been able to contact her parents for months and that her brother remains in Ukraine helping to transport civilians displaced by the war. The family used to live in Vorzel, a town in the outskirts of Kyiv that was occupied by Russian forces last month.

If Yelyzaveta is transferred to an HHS shelter or foster home, she would remain in government custody until she turns 18 in June unless she’s released to a sponsor in the U.S. According to a Ukrainian passport reviewed by CBS News, Yelyzaveta was born on June 6, 2004.

Fletcher urged the government to release Yelyzaveta as soon as possible to ensure she’s not further traumatized by her time in U.S. custody. Fletcher said she’s ready to sponsor and host Yelyzaveta.

“To let somebody sit in a cell, or in this facility, knowing that her parents are stranded, she’s not even sure whether they are alive or not, there’s a war going on in Ukraine, I mean all this trauma, no human being should go through that — that’s what bothers me,” Fletcher said.

Fletcher said she has reached out to several congressional offices about Yelyzaveta’s situation, including Senator Chris Van Hollen of Maryland, whose staff told her they are looking into the matter.

Ukrainian single adults and families traveling with children are being processed at U.S. ports of entries along the southern border under exemptions to a pandemic-era restriction known as Title 42, which is being used to quickly expel other migrants to Mexico or their home countries.

Facing limited legal pathways to reach the U.S. directly, thousands of Ukrainians have traveled to Tijuana in recent weeks hoping to benefit from the Title 42 exemptions. After their numbers come up on an ad hoc list set up by volunteers, Ukrainians show up to the San Ysidro crossing to ask for permission to enter the U.S.

“I’m very worried,” she said over a WhatsApp message.

Camilo Montoya-Galvez is the immigration reporter at CBS News. Based in Washington, he covers immigration policy and politics.