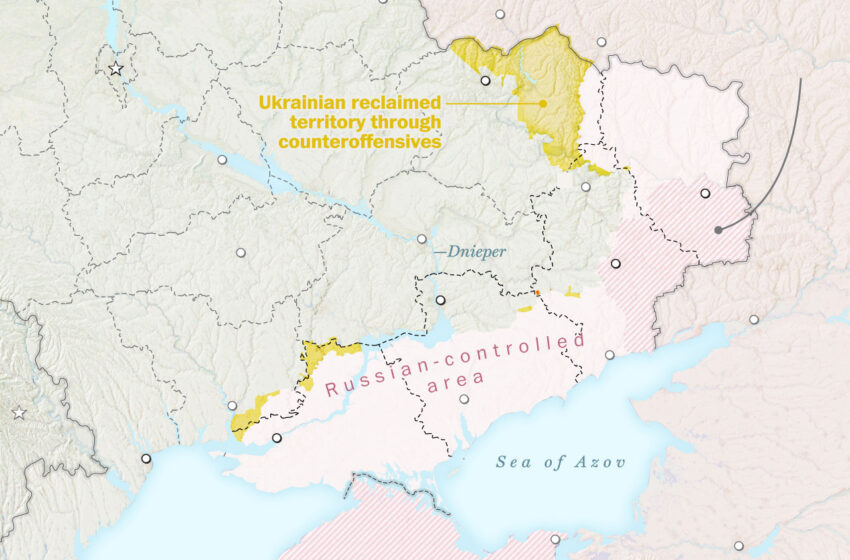 Moscow is moving ahead with plans to annex large swaths of Ukraine, after staging referendums, illegal under international law, that resulted in an outcome that was never in doubt: supposed overwhelming support for joining Russia.

The votes were carried out at gunpoint or under other forms of duress, and Western officials panned them as a sham. Russian officials and Kremlin proxy leaders claimed the results showed that more than 95 percent of voters want to become part of Russia. Ukraine has accused Russia of stealing its sovereign territory.

The alleged results lay the groundwork for Russia to formally absorb Ukrainian territory. An announcement on accession could happen as soon as Friday, the British Defense Ministry said this week.

The moves toward annexation come after Russian President Vladimir Putin declared a partial military mobilization last week, sparking protests and prompting tens of thousands of Russian men to flee the country. The Kremlin’s announcements signaled a new willingness from Putin to escalate the seven-month war, after losing significant ground to Ukrainian counteroffensives in Ukraine’s northeast.

Analysts warn that annexing the territories could enable Moscow to label Ukrainian attacks on those regions as attacks on Russia itself, raising the threat of a retaliatory nuclear strike.

Here’s what we know about Russia’s annexation plans and their implications for Ukraine and its allies.

What do we know about Russia’s plans to annex Ukrainian regions?

In near-synchronized announcements, Moscow-backed officials in four Ukrainian regions — Luhansk, Donetsk, Kherson and Zaporizhzhia — said last week that they would hold “referendums” from Sept. 23 to 27 on joining Russia. Putin quickly voiced his support.

Russia insisted the process and results were legitimate. But voting, which ended Tuesday, took place without credible international observers, and the entire process was under the control of the Russian government and occupying forces. Residents were visited in their homes and forced, sometimes at gunpoint, to check “yes” or “no” on joining Russia. Voting centers were also set up in schools, theaters and special polling stations.

Russian state media claimed that 99 percent of voters in Donetsk favored accession, as did 98 percent in Luhansk, 93 percent in Zaporizhzhia and 87 percent in Kherson, according to Tass. Altogether, the Russia-occupied regions make up nearly 15 percent of Ukraine’s total territory, according to the Institute for the Study of War.

After the staged vote, the leaders of the separatist enclaves in Luhansk and Donetsk in eastern Ukraine formally asked Putin to absorb the territories into Russia. Both indicated they had traveled to Moscow. Pro-Russian leaders in Kherson and Zaporizhzhia also appealed to Putin on Wednesday to accept those regions.

Putin is scheduled to address both houses of Russia’s parliament on Friday. He could use his speech to formally announce the annexation of occupied Ukrainian regions, according to Britain’s Defense Ministry. Parliamentary leaders in Russia said votes to absorb the four regions could be held on Oct. 3 and Oct. 4. Russia’s occupation authorities have said for months that they would hold such “referendums.” But plans accelerated after Ukraine’s military victories this month. Separatist officials in eastern Ukraine pleaded this month for urgent measures that would allow Moscow to immediately annex the territories.

Moscow recognized the separatist enclaves as independent before the invasion in February, and Russian-backed authorities have already taken administrative measures — including switching to the Russian ruble and distributing Russian passports — to bring residents of occupied Ukraine closer to Russia. Annexation would formalize Moscow’s control.

The United States warned in July that Russia was taking steps toward annexing parts of Ukraine, and that Moscow’s plan would probably include calling “sham” votes.

“Russia is beginning to roll out a version of what you could call an annexation playbook,” White House spokesman John Kirby said at a news briefing.

That playbook was honed in Crimea, which Russia invaded and illegally annexed in 2014. The Black Sea peninsula had been part of independent Ukraine for more than two decades. The official result of the staged referendum held in Crimea in March 2014: 97 percent of voters allegedly backed joining Russia. Following the vote, Putin recognized Crimea as an independent state, and Crimea’s pro-Russian parliament formally applied to become part of Russia. Putin and Russia’s parliament then approved an accession treaty.

What is Moscow’s strategy?

The speedy mobilization of Russian-backed officials around annexation comes after Ukrainian counteroffensives reclaimed large swaths of territory in northeastern Ukraine that Russian forces had seized early in the war.

The staged referendums appeared to mark a “new phase of the war,” said Natalia Savelyeva, a fellow at the Center for European Policy Analysis. “They’re signs that the Russian regime doesn’t feel very comfortable.”

Hard-liners in Russia have demanded a tougher approach to the war, and they cheered calls this week for annexation.

Russia’s military control over the regions it has occupied is shaky, and the sham referendums have been seen as a political tool to accomplish the military aim of securing Moscow’s hold.

The idea was to create the pretext of popular support to justify further military action, Savelyeva said. For Putin and his backers, the appearance of having legal authority to make decisions remains important. Sergey Tsekov, a former Ukrainian politician turned Russian senator from Crimea, told Russian news agency RIA Novosti after the staged referendums that they “were held in accordance with international norms, legislation and can be recognized as legitimate.”

Britain’s Defense Ministry said Tuesday that Russia’s leaders “almost certainly hope” that an annexation announcement will fuel support for the “special military operation,” at a time when Moscow’s “partial mobilization” has increased Russian opposition to the war.

Some analysts raised the alarm that the referendums signaled Putin was willing to pursue an escalatory path.

Tatiana Stanovaya, an analyst with R.Politik political consultancy, said in a Telegram post that the votes constituted “preparation for a full-scale war,” and annexation, “an unequivocal ultimatum from Russia to Ukraine and the West: Either Ukraine retreats or nuclear war.”

In a not-so-veiled reference to Russia’s nuclear arsenal, Putin threatened last week to “use all the means at our disposal” to protect Russian territory, as he defines it. “This is not a bluff,” he said. Former president Dmitry Medvedev was more pointed: “Russia has the right to use nuclear weapons if necessary,” he wrote on his Telegram channel on Tuesday.

{Sigh} It’s here at last. As i wrote, referendums to annex Ukrainian territory into Russia. They’ve been laying this groundwork for months. Today, accompanied by harsher penalties for desertion and refusals. Here are considerations for what’s next (1/) https://t.co/zVNrNRnUqQ

How have Ukraine and allies reacted?

Ukraine and Western countries have not recognized the annexation of Crimea, and they do not intend to recognize any absorption of other illegally annexed regions into Russia, either.

Secretary of State Antony Blinken said Tuesday that the United States would never recognize territories annexed through the staged referendums as part of Russia. The United States will present a U.N. Security Council resolution to condemn the annexations, Ambassador Linda Thomas-Greenfield said. Ukrainian President Volodymyr Zelensky has called for Russia to be suspended from “all international organizations,” including the United Nations.

The European Union unveiled a new round of sanctions against Russia on Wednesday in response to the referendums. The package includes “sweeping new import bans on Russian products” that will cost Russia 7 billion euros ($6.8 billion) in revenue, European Commission President Ursula von der Leyen said. Also in the package: additional bans on exports and services to Russia, sanctions on individuals and a legal basis for a price cap on Russian oil.

“We do not accept the sham referendum and any kind of annexation in Ukraine, and we’re determined to make the Kremlin pay for this further escalation,” von der Leyen said.

It remains to be seen what additional support — military or otherwise — countries might offer to Ukraine. Kyiv has requested tanks, longer-range missiles and other weaponry in response to Moscow’s threats of escalation, but the United States and Germany have not agreed to provide them. Zelensky accused Russia on Tuesday of carrying out “nuclear blackmail” and called for the West to take preventive action.

U.S. officials have indicated that the United States would continue to back the Ukrainian military if it tried to retake annexed land, and that an agreement that Ukraine would not strike Russian territory with U.S.-made weapons would not apply to illegally annexed areas.

President Biden, meanwhile, warned Putin not to use a nuclear weapon. “Don’t. Don’t. Don’t,” he said on the CBS news show “60 minutes” earlier this month. “It would change the face of war unlike anything since World War II.”

Zelensky said Moscow’s referendums will not change his military’s defense of Ukraine’s sovereign territory and vowed to recapture all occupied areas.

“There are powerful incentives for Ukraine to continue to attack this territory,” said Dara Massicot, senior policy researcher at the Rand Corp. “The Russian military is at its weakest point right now.”

Robyn Dixon in Riga, Latvia, Karina Tsui, Paul Sonne and Karoun Demirjian in Washington, Emily Rauhala and Beatriz Rios in Brussels, and Annabelle Timsit in London contributed to this report.