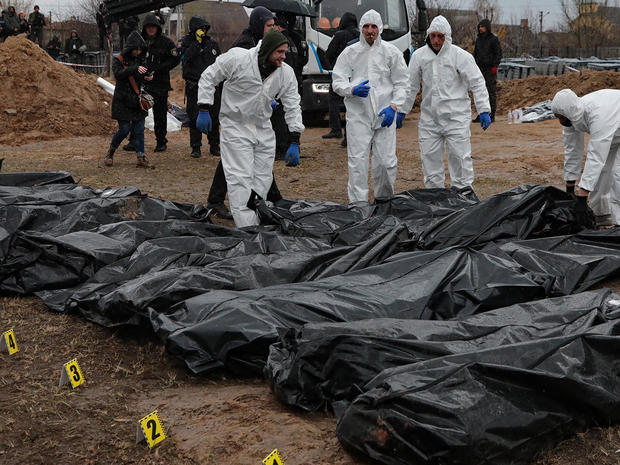 What are the prospects for pursuing Vladimir Putin for war crimes?

More than 50 innocent people trying to flee the fighting in eastern Ukraine were killed Friday in a Russian missile attack on a crowded train station in Kramatorsk. Among the first responders: investigators gathering evidence to determine if this is a war crime.

War is full of unspeakable violence, and civilians always suffer. But it is a crime to kill civilians on purpose.

“We’re seeing a pattern of deliberate attacks against civilians,” said Ambassador Beth Van Schaack, the State Department official in charge of assembling evidence that could prove Russia is committing war crimes in Ukraine.

Every day, it seems, there is another crime scene to investigate. Some of them encompass entire cities, where residents are being relentlessly bombarded by the Russians.

“I think the Mariupol theater attack is really emblematic of that,” said Van Schaack. “Obviously civilian, full of individuals who were sheltering from the war around them, and it gets deliberately targeted by Russia’s forces.”

“What we need to do is focus on deliberate attacks against civilians, or indiscriminate attacks against civilians,” Van Schaack replied. “Those are clear war crimes. There’s no fog of war here, right? If you look at a map, for example, of Mariupol, you can see where the military objectives might be, which would be appropriate targets for a military campaign – and then you see where the actual strikes were happening.”

Then there are the streets of Bucha, on the outskirts of Kyiv, where atrocities were committed by Russian forces. “Individuals who clearly were in custody with their hands tied [were] shot execution-style, left in basements, left in fields,” said Van Schaack. “This is not just shells coming from miles and miles away. This is close-range violence committed by, at the hands of, Russia’s forces.”

Martin asked, “Have you seen any evidence that the Russians are actually trying to cover up crimes?”

“Chillingly, less of that than you might expect,” Van Schaack replied. “Bodies are being left in the street. They seem to be doing this in an unbelievably brazen way. That’s really shocking.”

“Who do you go after first? The perpetrator who pulled the trigger? The commander of the troops? Or the leaders back in Moscow?”

“Frankly, the answer is all of the above,” she replied. “But you’re always looking to go up the chain of command to the architects of this terrible violence.”

Justice Richard Goldstone, the chief prosecutor of war crimes committed in Bosnia in the 1990s, said that in the case of Ukraine, the key will be establishing a pattern: “A prosecutor could go very quickly to the more senior ranks because of the mass of evidence that is available,” he said. “If Bucha is an exception, it may be difficult to put it at the door of President Putin, or of his senior generals. But if what we’re seeing in Bucha is repeated in one village after the other, that’s not coincidence. There obviously is an order for that system to be carried out.”

It took years to investigate Bosnia, but the president of Serbia himself, a dictator named Slobodan Milošević, ultimately ended up in the dock at the International Criminal Court in the Hague.

Goldstone said, “President Milošević, in his wildest dreams, never thought he’d be standing trial in the Hague. But there was a revolution in his country, and he was kicked out, and he was put on a plane and bundled off to the Hague.”

Milošević, who died in prison before a verdict could be reached, was small fry compared to Vladimir Putin, who President Biden says should be tried as a war criminal.

“You saw what happened in Bucha,” Mr. Biden said Monday. “He is a war criminal.”

Martin asked Van Schaack, “How do you make a case against Putin?”

“Because he is essentially an autocrat with complete control over the apparatus of the Russian state and the Russian military, it’s actually a much easier case than we’ve seen in some other situations,” she replied.

“Do you need some kind of verbal direction that he gave to his commanders?”

“Even without the so-called smoking gun order, there is still this idea of command responsibility – that the images are so stark, it’s so clear that his troops are running amok, terrorizing the civilian population within Ukraine,” Van Schaack said.

Martin asked Goldstone, “Have you heard anything Putin has said to date that could be used against him as evidence of a war crime?”

“It’s more what he hasn’t said, I think, that’s important,” he replied. “He must know the facts from watching his own television screen, and if he hasn’t taken steps to stop it, that would make him guilty of a war crime.”

Van Schaack said she believes Putin will be indicted, adding, “I’m not sure whether he’ll be in custody.”

Goldstone said, “If President Putin remains in power and remains in Russia, he’s not going to stand trial at the International Criminal Court in the Hague. That in no way should dissuade prosecutors from going ahead with their work. You never know what could happen.”

An indictment of Putin would make the President of Russia an international fugitive. “It’s not easy for a head of state to fear being arrested when he or she puts foot in a European country or in a North American country,” Goldstone said.

Van Schaack said, “He is inevitably now trapped in Russia. He will never be able to travel internationally, because it would be too great a risk that he would be captured and brought before a court of law.”

The same holds true for any other Russian charged with war crimes. “They will enjoy some impunity while they stay within Russia,” Van Schaack said, “but what we have seen is perpetrators don’t stay within their home states. They want to go shopping in Europe or go on vacation somewhere, and they get identified, and then the law enforcement is activated. And we are never more integrated than we are now.”

Martin asked, “If no Russian ends up standing trial, will this effort have failed?”

“I don’t think so,” Van Schaack replied. “I think it’s incredibly important to document the truth of what is happening, if only for the purposes of keeping an accurate history of this horrific moment in time, but also for the benefit of the victims and the survivors.”