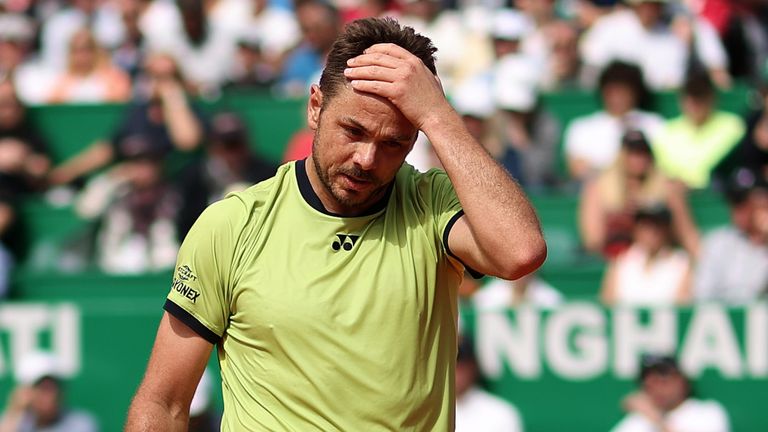 Stan Wawrinka made a losing return to the ATP Tour after a 13-month injury absence; Three-time grand slam champion beaten by Alexander Bublik in the first round of the Monte Carlo Masters; Plus wins for Jannik Sinner, Marin Cilic, Diego Schwartzman and Pablo Carreno Busta

Three-time grand slam champion Stan Wawrinka made a losing return to the ATP Tour after a 13-month injury-enforced absence as he was beaten by Alexander Bublik in the first round of the Monte Carlo Masters.

The Swiss 37-year-old was sidelined by a foot injury throughout last season but showed glimpses of his trademark style as he stretched his Kazakh opponent to three sets in a 3-6 7-5 6-2 defeat.

Wawrinka, who won the event in 2014, told atptour.com: “I think the body’s getting much better.

“I’m still far away from where I want to be, but I think I’m (going in) the right direction. I think today was a positive match. It was a tough loss, of course, but I’m happy with the way I was playing.”

Jannik Sinner survived a scare to nudge past Borna Coric 6-3 2-6 6-3 in just under two and a half hours.

The Italian world number 12 admitted he struggled to get used to the surface and also had to shrug off an apparent stomach injury midway through a tough second set.

“It was a tough match because the first time on clay after quite a while is never easy,” Sinner said. “So I’m very happy with my performance, even if it was not my best.”

Jo-Wilfried Tsonga, who has announced his intention to retire after this year’s French Open, was beaten 6-2 6-2 by fellow veteran Marin Cilic.

Diego Schwartzman, the 12th seed, beat Karen Khachanov 6-7 (5) 6-3 6-3 and Pablo Carreno Busta was another seed safely through to the second round after his 6-4 4-6 6-2 win over qualifier Sebastien Baez.