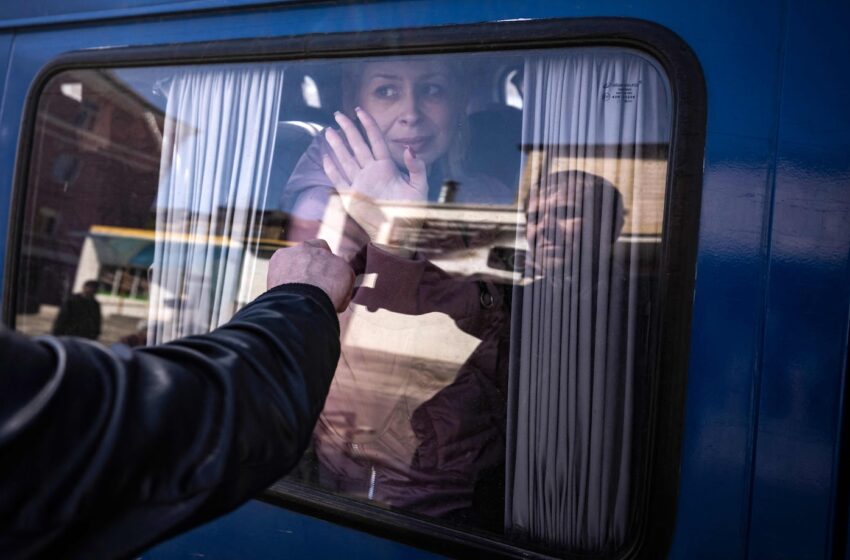 DNIPRO, Ukraine — Residents of the beleaguered regions of eastern Ukraine continued to evacuate Saturday after officials agreed on 10 humanitarian corridors, as government officials increasingly worry that the next phase of the war could become a full-scale confrontation not seen in generations.

The governor of Luhansk, a province in eastern Ukraine, Serhiy Haidai, on Saturday urged residents to immediately leave as more Russian troops arrived and shelling intensified. But Haidai noted that residents were fearful after a ballistic missile attack on Friday, suspected to be a Russian airstrike, hit a train station in the eastern city of Kramatorsk, where thousands of people were jammed at a train station waiting to leave.

The horrific attack killed more than 50 people as fears rose over dangers facing civilians as Russian forces regroup to concentrate on capturing southern and eastern Ukraine. “Compared to other days, there were far fewer people willing,” Haidai wrote on the Telegram messaging app. “The tragedy affected this.”

Haidi said authorities would continue to try to persuade people to leave. “We are not stopping,” he said during a Ukrainian television interview. More than 6,600 people fled embattled areas in those regions through humanitarian corridors on Friday, according to Kyiv, the highest count this week.

The gruesome scenes of the latest attacks came only days after evidence emerged that Russian troops had tortured and massacred hundreds of civilians in Bucha, just outside Kyiv. The images of the dead, many with hands bound behind them and apparently executed, have intensified pressure on Western governments to support Ukraine and provide more heavy weaponry.

In the wake of the train station attack, British Prime Minister Boris Johnson made a surprise visit to Kyiv on Saturday and met with Ukrainian President Volodymyr Zelensky. It was his first visit to the country since the Russian invasion began.

Calling the war “inexcusable,” Johnson pledged to intensify sanctions on Russia by not merely freezing assets but also moving away from the use of Russian oil and gas. He also promised British assistance with clearing mines Russian forces left behind and said that Britain would liberalize trade with Ukraine. A day earlier, Johnson announced that the United Kingdom would provide an additional $130 million worth of weapons for Ukraine.

In a news conference with Johnson after their meeting, Zelensky called on leaders of Western democracies to “follow the example of the United Kingdom” by imposing an embargo on Russian energy sources and supplying more weapons to Ukraine.

Later Saturday, Zelensky shared a video on Telegram showing the two men walking down largely empty streets in Kyiv, flanked by soldiers. Ukraine faces a new and potentially more challenging phase in the war as Russia repositions its forces.

Unlike near Kyiv, where Ukrainian forces were able to hide in forests, the wide open spaces of the east will make it harder for the Ukrainians to run guerrilla operations. For their part, Russian forces will be able to muster large mechanized formations of tanks and armored vehicles. Both sides appear positioned to dig in for a long and bloody battle focused in the east that U.S. officials have warned could last months or more.

After numerous missteps and surprisingly fierce resistance from Ukrainian forces, Russia seems to be trying to fix some of the problems its forces initially encountered. A senior U.S. official said Saturday that Russia had appointed a general with extensive experience in Syria and the Donbas to oversee the war effort, marking the first time a single commander has taken control of the entire Ukraine operation.

The appointment of Alexander Dvornikov, commander of the Russian southern military district, signals an attempt by Moscow to bring some coherence to what military experts describe as a chaotically executed operation that has taken the lives of several generals.

Part of the challenges facing Russia include the stubborn resistance from Ukraine, which has prevented Russia from establishing a land corridor linking Crimea to the eastern Donbas region, the British Defense Ministry said in a Saturday intelligence update.

Austrian Chancellor Karl Nehammer also visited Kyiv on Saturday and met with Zelensky, pledging to help alleviate the suffering of Ukrainians. Austria, which has remained neutral during the war, is providing humanitarian aid to Ukraine but not weapons.

The day trip by the Austrian leader follows a visit on Friday by European Union officials, including European Commission President Ursula von der Leyen and European Union foreign policy chief Josep Borrell. The E.U. officials also visited the suburb of Bucha after the hundreds of civilians were found slain after Russian troops withdrew.

After the visit by E.U. officials, the European Union said it would resume its diplomatic presence in Kyiv. Borrell said in a statement the governing body had confidence that the Ukrainian government could “ensure effective and full functioning of state and government structures, despite very difficult circumstances.”

Matti Maasikas, head of the E.U. delegation in Ukraine, also tweeted a picture of the E.U. flag, signaling his return to Kyiv after the office temporarily moved to Poland during the Russian invasion.

“Not yet,” he said in English for emphasis. “Of course it’s not enough.” But Zelensky also said he was committed to finding peace even as Russia carries out unimaginable horrors on the Ukrainian people that President Biden and European leaders have said amount to war crimes.

At least 170 children have died and over 320 have been injured since the war began in Ukraine, the country’s prosecutor general said Saturday. Five children were among the dead and 16 were injured in the strike at the train station. Zelensky also called for an international court to hold Russia accountable for that attack in Kramatorsk.

“This is another war crime of Russia, for which everyone involved will be held accountable,” Zelensky said in a video address Friday night. “Like the massacre in Bucha, like many other Russian war crimes, the missile strike in Kramatorsk must be one of the charges at the tribunal, which is bound to happen.”

Although the Kramatorsk station was not operational after the missile assault, the railway company said two stations in the Donetsk region and one station in the Luhansk region were serving passengers.

In Luhansk, Haidai wrote on Telegram that volunteers helped almost 600 people evacuate from the province in eastern Ukraine by train and bus. The state railway company said earlier in the day that it was trying to evacuate “as many people as possible.”

The International Committee of the Red Cross managed to evacuate 10 people who were severely wounded in Kramatorsk, said Patricia Rey, head of communications for the organization. Those civilians were transported via ambulance to a hospital in Dnipro. “It is critically important that civilians trapped in cities are given a way out but also that humanitarian assistance is allowed in these areas,” Rey said.

Citing the train station attack, the regional government in Odessa announced a curfew from 9 p.m. Saturday to 6 a.m. Monday for residents of the southern port city. Although the city has endured relatively few attacks during the war, two missiles launched from the Black Sea targeted critical infrastructure in the Kirovohrad and Odessa regions, killing no one, the city council reported Friday.

In an effort to ease the humanitarian catastrophe, Canadian Prime Minister Justin Trudeau announced Saturday that his government would charter flights to Canada for Ukrainian refugees, and would undertake other measures to help Ukrainians relocate to Canada. The government will put Ukrainians up in hotels for two weeks after their arrival and provide temporary income support “to help refugees get on their feet,” Trudeau said.

With all of the Black Sea ports in Ukraine blockaded by the Russian military, it is almost impossible for the country to export its agricultural produce. As a result, the price of staples is soaring, hitting poorer countries especially hard.

The Russian Ministry of Justice announced Friday that it had revoked the registration of Amnesty International, Human Rights Watch and several other international groups. The ministry said the groups “were expelled after they were found to be in breach of the current legislation of the Russian Federation.” It did not specify what laws were allegedly broken.

Amnesty International Secretary General Agnès Callamard said its work exposing Russian war crimes would continue even with its Moscow office shut down. “Amnesty’s closing down in Russia is only the latest in a long list of organizations that have been punished for defending human rights and speaking the truth to the Russian authorities,” she said.

“In a country where scores of activists and dissidents have been imprisoned, killed or exiled, where independent media has been smeared, blocked or forced to self-censor, and where civil society organizations have been outlawed or liquidated, you must be doing something right if the Kremlin tries to shut you up,” Callamard said.