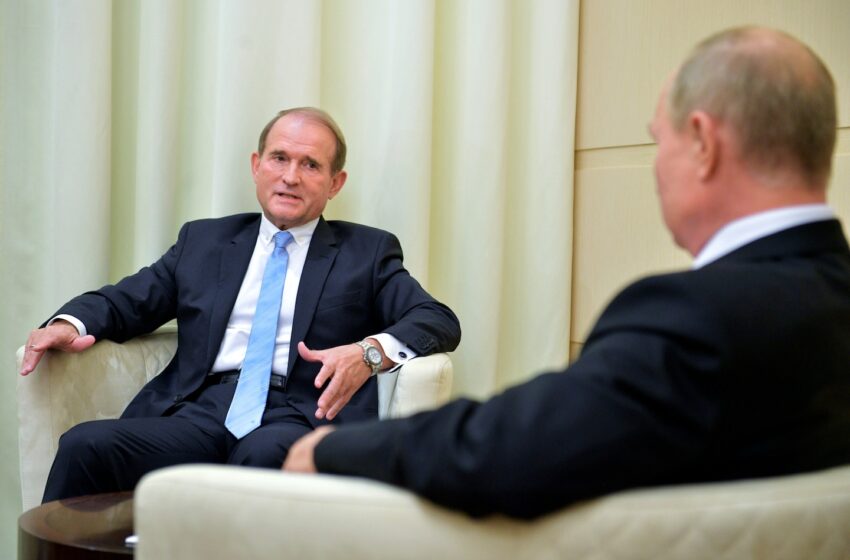 Ukrainian authorities announced Thursday that they had seized a sum of 154 assets from pro-Kremlin opposition politician and mogul Viktor Medvedchuk, who was captured this week following an escape from house arrest shortly after Russia invaded Ukraine.

Among the long list of property seized from Medvedchuk and his family: 30 plots of land, 23 houses, 32 apartments, 26 cars and one yacht.

The seizures add further intrigue to the circumstances of the escape and recapture of one of Ukraine’s most notorious oligarchs, known for his close relationship with Russian President Vladimir Putin, who acts as godfather to Medvedchuk’s daughter.

Who is Viktor Medvedchuk, the pro-Russia mogul arrested in Ukraine?

Despite humble beginnings, Medvedchuk was one of the richest people in Ukraine. He appeared to enjoy a lavish life: After escaping his house arrest in a mansion at an upmarket spa town near Kyiv in February, activists found that the location housed an ornate replica of a 19th-century railway dining car, replete with a gold-gilded toilet and bidet hose.

Ukrainian authorities had already charged Medvedchuk with treason last year and placed him under house arrest, freezing some of his assets. As tensions increased between Russia and Ukraine, the opposition leader was accused of taking part in Russian plans to impose a puppet government on Ukraine.

In January, the U.S. Treasury Department said Medvedchuk and two members of his political party were involved in a plot to “recruit current and former Ukrainian government officials to prepare to take over the government of Ukraine and to control Ukraine’s critical infrastructure with an occupying Russian force.”

Shortly after Russia invaded Ukraine on Feb. 24, the 67-year-old mogul escaped from his house arrest in a mansion in the town of Pushcha-Vodytsya.

Medvedchuk’s location was a mystery for 48 days before the surprise announcement of his capture this week. In photographs shared by President Volodymyr Zelensky, the disheveled fugitive was shown wearing camouflage fatigues with a Ukrainian flag patch.

Speaking on Ukrainian television, the head of Ukraine’s SBU state security service revealed details of his capture, alleging that agents from Russia’s FSB intended to take Medvedchuk across the border by boat into Moldova’s breakaway Transnistria region, where Russian forces are stationed, and from there to Russia.

“In fact, they allegedly wanted to take Medvedchuk to the Ukrainian border under the guise of a member of the Ukrainian armed forces, accompanied by colleagues,” Ivan Bakanov said. His comments were later posted on the Ukrainian security service’s Telegram channel.

Bakanov said that an “evacuation group of FSB special forces” was waiting in Transnistria, which was then supposed to take Medvedchuk to Moscow. The Russians, he said, were assisted in their plan by members of Ukraine’s criminal world and “corrupt law enforcement officers.”

Ukrainian security agents arrested Medvedchuk as he was leaving the Kyiv region on Tuesday.

Medvedchuk was a leader of Ukraine’s main pro-Russian political party, the Opposition Platform-For Life party, and is among Putin’s strongest Ukrainian supporters. Zelensky’s government suspended Medvedvcuk’s party, along with other smaller pro-Russian parties, in March.

Outside of his political career, Medvedchuk was also one of the wealthiest people in Russia, with a net worth of $620 million in 2021 according to Forbes Russia. He owned three Ukrainian televisions channels, though these were blocked last year as Zelensky’s government said they were “one of the instruments of war against Ukraine” and bankrolled by Russia.

Dmitry Medvedev, deputy chairman of Russia’s Security Council and former Russian president, rejected Zelensky’s offer of a prisoner swap for Medvedchuk on Wednesday and appeared to threaten his Ukrainian captors.

“These people should watch out and lock the doors well at night to make sure they do not become the people who are going to be exchanged themselves,” Medvedev said, according to an account from Reuters.

In its statement released on Thursday, Ukraine’s State Bureau of Investigation said it would continue to “prosecute traitors and confiscate their property, as is required by law” but did not offer more details of Medvedchuk’s property.

Ukrainian media reported this week that a 300-foot yacht called Royal Romance owned by Medvedchuk was being transferred to a government agency that recovers seized assets. The $200 million boat had been docked in the port of Rijeka, Croatia.