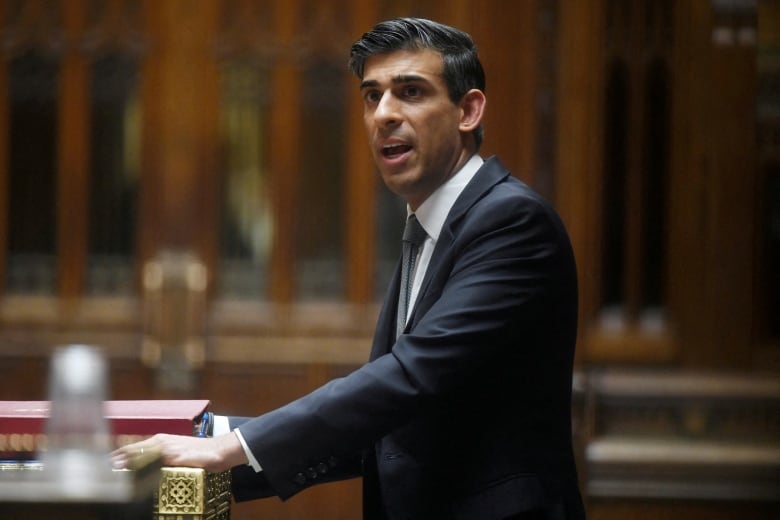 Prime Minister Boris Johnson said Tuesday he paid a fine from police for attending a lockdown-breaching birthday party in his official residence, making him the first British leader to be sanctioned for breaking the law while in office.

The fines for Johnson, his wife, Carrie, and Treasury chief Rishi Sunak brought a simmering crisis for the prime minister back to full boil, with opposition politicians immediately calling for his resignation.

The news came after London’s Metropolitan Police force said it had issued at least 50 fines after investigating a dozen events held at 10 Downing Street and other government buildings.

Johnson’s government has been shaken by public anger over revelations that his staff held “bring your own booze” office parties, birthday celebrations and “wine time Fridays” in 2020 and 2021 while millions in Britain were barred from meeting with friends and family because of his government’s COVID-19 restrictions.

“I have paid the fine and want to offer a full apology,” Johnson said. “I understand the anger many will feel that I myself fell short when it came to observing the very rules which the government I lead had introduced to protect the public. I accept in all sincerity that people had the right to expect better.”

Downing Street said Johnson was being sanctioned for attending a “gathering of two or more people indoors in the Cabinet Room at 10 Downing Street” on June 19, 2020. The event was a surprise birthday party for the prime minister.

Johnson said the gathering lasted “less than 10 minutes,” and “at that time, it did not occur to me this might have been a breach of the rules.”

Call for vote of no-confidence

The police force did not identify the recipients or the size of the fines. Thousands of people were fined between 60 pounds ($99 Cdn) and 10,000 pounds ($16,443) by police for rule-breaking social gatherings.

Carrie Johnson said she was notified that she will receive a fine, though she has not yet received any details about it.

Opponents, and some members of the governing Conservative Party, have said for months that Johnson should resign if he is issued a fine for breaking rules he imposed on the rest of the country during the pandemic.

“Boris Johnson and Rishi Sunak have broken the law and repeatedly lied to the British public,” said Keir Starmer, leader of the opposition Labour Party. “The Conservatives are totally unfit to govern. Britain deserves better.”

Opposition parties called for lawmakers to be recalled from their Easter break for a vote of no-confidence in Johnson.

The COVID-19 Bereaved Families for Justice group said “there is simply no way” that Johnson or Sunak can remain in their jobs.

“Their dishonesty has caused untold hurt to the bereaved,” said the group’s spokesman Lobby Akinnola. “Not only that, but they have lost all credibility with the wider public.”

In total, police say they were issuing at least 50 fines for the breaches, but did not identify who the recipients are. Police say they have sent questionnaires to more than 100 people, including the prime minister, and interviewed witnesses as part of the investigation.

Johnson’s international image, battered by Britain’s messy exit from the European Union under his leadership, has been revived by his firm military, political and moral support for Ukraine. Johnson travelled to Kyiv last weekend to meet with President Volodymyr Zelensky.

Johnson might also benefit from the woes afflicting Sunak, the 41-year-old Treasury chief who has been seen as a potential rival and successor. The fine for Sunak comes as he also faces a backlash over the spiralling cost of living and, more recently, questions about his financial arrangements and the tax status of his wealthy wife.

Sunak said in a statement he had paid his fine and regretted the “frustration and anger caused.” “I offer an unreserved apology,” he said in a statement. “I understand that for figures in public office, the rules must be applied stringently in order to maintain public confidence.”

Impact on upcoming votes to be watched

A total of 16 parties were investigated by a senior civil servant, Sue Gray, with a dozen of them also under investigation by the Metropolitan Police.

In January, civil servant Gray published a report into the gatherings not under criminal investigation. She said “failures of leadership and judgment” in Johnson’s government allowed events to occur that should not have happened.

The report said some of the gatherings showed a “serious failure to observe” standards for government, and some behavior at the parties were “difficult to justify” given how the public were asked to restrict their lives.

Jill Rutter, a senior fellow at the Institute for Government think-tank, said “partygate” had damaged the reputation of both the government and the civil service.

“The line, ‘It’s one rule for them and another law for the rest of us’ really does resonate,” she said.

Rutter said Johnson was probably safe for now, but could face fresh peril if the Conservatives take a hammering in next month’s local elections.