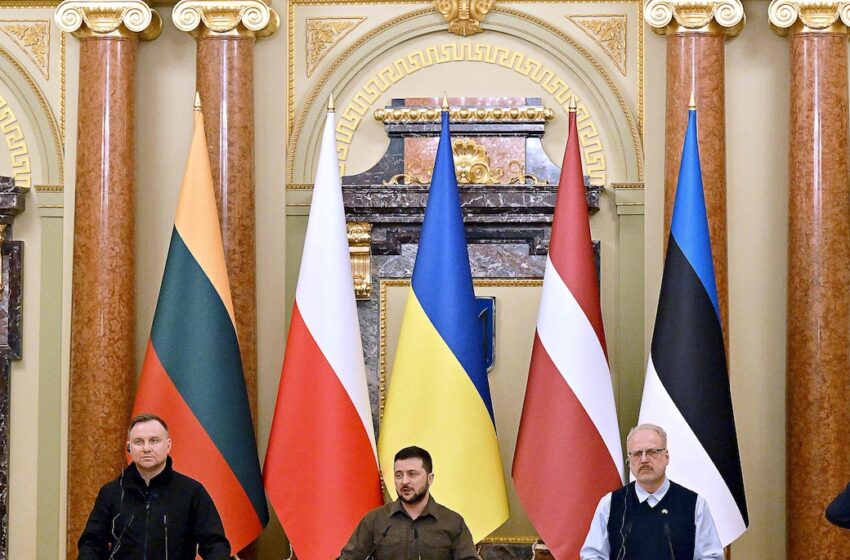 The big role that small countries are playing in supplying Ukraine

Russia is a giant of a country in scale, population and ambition. Yet some of the most notable military support for Ukraine after the Kremlin’s invasion is coming from countries far, far smaller.

Consider Estonia, which has donated anti-armor weapons like FGM-148 javelins and artillery like D-30 122mm howitzers to Ukraine. There’s also its fellow Baltic states Latvia and Lithuania, which have donated Stinger launchers and thermal imaging devices, according to tracking from Jane’s, the open-source defense intelligence provider.

The Czech Republic has reportedly sent vehicles like Russian-made T-72M tanks and BMP-1 infantry fighting vehicles. Central European neighbor Slovakia announced Monday that it was in talks with allies about how to provide its own fleet of Soviet-designed MiG-29 fighter aircraft to Ukraine forces, building on a prior transfer of a Russian-made S-300 air defense system.

Even smaller countries have done their part: The Grand Duchy of Luxembourg pledged NLAW antitank weapons and jeeps. But mostly, this is the work of countries farther east, former members of the Soviet Union or Warsaw Pact.

These are not military powerhouses. The largest of these nations, by some way the Czech Republic, has a slightly smaller population than Moscow. Combine all of the countries I listed above and you’d still be far from the economic might of Russia — let alone its geographic size.

Their collective mass is barely half that of Ukraine, the smaller of the two warring parties by far.

‘We cannot blink’: Eastern Europe tells the West it is time to stand up to Putin

But in support for Ukraine, these nations are punching above their weight. Though some far larger nations, including the United States and Britain, have provided more than them, many others — such as the twin European giants of France and Germany — are well behind them.

Important too is not just the scale of weapons provided, but the type. As the threat of conflict moved away from potential urban warfare in the west of Ukraine to the more open east, Ukrainian officials have called for heavier weapons.

In a video posted to his Telegram account Wednesday, Ukrainian President Volodymyr Zelensky called for heavy artillery, armored vehicles, air defense systems and aircraft. “Our war is far from over,” Zelensky said. “This was just the first round.”

Here, small countries are leading the way. Czech Republic’s reported delivery of T-72Ms marked the first time a NATO country had provided tanks to Ukraine since Russia’s invasion began. Slovakia’s promise of MiG-29s came after Poland made a similar offer to send its own Soviet-era fighter jets to Ukraine.

Speaking to my colleagues last week, some experts noticed a shift in Western thinking about this sort of heavy weaponry. Before, there had been concerns that sending offensive weapons would escalate the conflict unnecessarily, but as the fighting spread eastward — and evidence of alleged Russian atrocities was found — such qualms seem to have dropped.

The United States has let go of its objections to supplying MiG-29s jets to Ukraine, an official said Tuesday. And President Biden announced the following day that his administration has authorized an additional $800 million in security assistance for Ukraine, with “new capabilities [including] artillery systems, artillery rounds, and armored personnel carriers.”

The contrast with other, far larger, European nations is palpable. Though France has not publicized its military aid to Ukraine, L’Opinion reported on Tuesday that the sum total of the aid had cost France 120 million euros — $130 million — and that it included missiles, satellite imagery and training.

The number was not much more than half of what Estonia has committed to giving Ukraine, roughly $240 million. And Estonia’s economy is almost 100 times smaller than France’s.

Germany, an even larger economic powerhouse, was mocked early in the conflict for sending 5,000 helmets to Ukraine. Though it later shifted its policy to send Ukraine more weaponry, Politico Europe reported this week that German Chancellor Olaf Scholz had delayed a plan to give high-end tanks to the country.

Liana Fix, an expert on Russia at the Berlin office of nonprofit Körber-Stiftung, said that Germany had a different view of the conflict than other nations — many of which were not only in closer proximity to Russia but shared complex histories of conquest and subjugation.

The larger countries also hope to be able to broker peace. “Berlin does not want to provide Western-made heavier weapons out of concern this is perceived as a provocation by Russia, clinging to the role that Germany and France had in the Normandy format as those countries that still talk to Russia,” Fix said, referring to efforts to mediate the 2014 conflict over the Donbas.

It’s also not clear that all military aid can be put to good use. There are concerns in many Western capitals that donations of high-tech military equipment will be moot if Ukrainians haven’t trained with them.

Though the Russian-made equipment offered by countries like Slovakia and the Czech Republic may skirt that problem, some of it is old stuff that the countries would be getting rid of anyway. Slovakia’s pledge to donate air force equipment hinges on the idea that it will be resupplied with U.S.-made F-16s.

One Ukrainian pilot who flies a MiG-29 in Odessa suggested to my colleague Isabelle Khurshudyan that the planes they had were already no good against the more advanced Russian air force: “That’s why we need to be technically equal with the Russians. Just our mental advantage is not enough to fight with these technologies.”

But the perception that some smaller European countries are backing Ukraine more than bigger countries will be hard to shake. Zelensky on Wednesday hosted the three leaders of the Baltic states — Lithuanian President Gitanas Nauseda, Latvian President Egils Levits and Estonian President Alar Karis — in Kyiv. The Baltic leaders visited along with Polish President Andrzej Duda, leader of another country playing an oversize role in supporting Ukraine.

But there was reportedly someone else supposed to be there: German President Frank-Walter Steinmeier.

German newspaper Bild reported that Zelensky had blocked Steinmeier’s visit and cited a Ukrainian diplomat who said that because of the German president’s role in 2014 peace talks “he is currently not welcome in Kyiv.” Scholz told a radio interviewer he felt “irritation” that the German president had not been received.

Damir Marusic, a resident senior fellow with the Atlantic Council’s Europe Center, said he felt that a new, post-Ukraine European security order was taking place and that smaller states closer to Russia were going to be more proactive. “I think one way to interpret what the front-line states are doing is they see in Ukraine a potential fate for themselves,” Marusic said.

Much of the fate of the war will still lie with bigger countries like the United States and Russia, Marusic added, but for small nations “absolutely their forthrightness and their drive to do this has shifted the horizon of what’s possible” in supporting Ukraine.

But there remains a gulf in perception across Europe between west and east, big and small. In Berlin, many still think that the invasion of Ukraine is a regional war, Fix said. “What smaller states understand is that Ukraine is defending the security of Europe.”