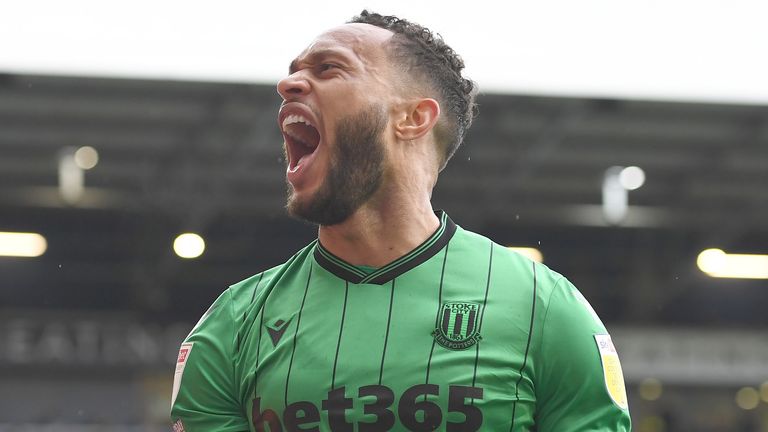 West Brom’s chances of reaching the Sky Bet Championship play-off places look all but over after they fell to a 3-1 defeat at home to Stoke.

Two quickly-taken free-kicks did the damage for the Baggies in each half as a Jake Livermore own goal and Jacob Brown header set Stoke on the way to a first away win in eight games.

Callum Robinson pulled one back in the 73rd minute with his eighth goal of the season but the Potters made sure of victory when a swift counter-attack ended with Lewis Baker placing the ball past goalkeeper Sam Johnstone.

The defeat leaves Steve Bruce’s side eight points behind the play-off places with five games remaining after results did not go their way elsewhere.

Albion’s momentum from Wednesday night’s victory over Bournemouth was cut short early in the game when Stoke opened the scoring after 16 minutes.

Tommy Smith’s quick free-kick caught the West Brom defence napping and Baker’s cutback was bundled into his own net by Livermore from close distance.

Stoke then missed the chance to double their lead before the half-hour mark with two big opportunities falling to Steven Fletcher and Josh Tymon.

After Brown managed to hold the ball up against Matt Clarke, Fletcher ran onto the ball before being denied by the foot of Johnstone.

Johnstone was there again to deny the visitors later on when he collected a weak strike from Tymon after a fine passing move from the Potters.

Bruce’s side finally began to ask questions of their opponents as half-time approached, but Jayson Molumby and Andy Carroll both failed to hit the target.

Albion failed to learn from their earlier mishaps and were punished from another quickly-taken free-kick from Stoke.

Smith spotted the run from Brown through the middle as West Brom watched on and the forward headed in his 12th goal of the season.

Substitute Robinson pulled a goal back for West Brom in the final 15 minutes. Johnstone’s long ball was headed down by Carroll and Karlan Grant’s shot fell to the feet of Robinson, who slotted home.

Another substitute came close to having an impact when Adam Reach’s deep cross was powered towards goal by Carroll only for keeper Jack Bonham to tip it over.

But Stoke made sure of a first away victory since January when a counter-attack involving Josh Maja set up Baker to poke home his eighth goal of the campaign in the fourth minute of stoppage time.