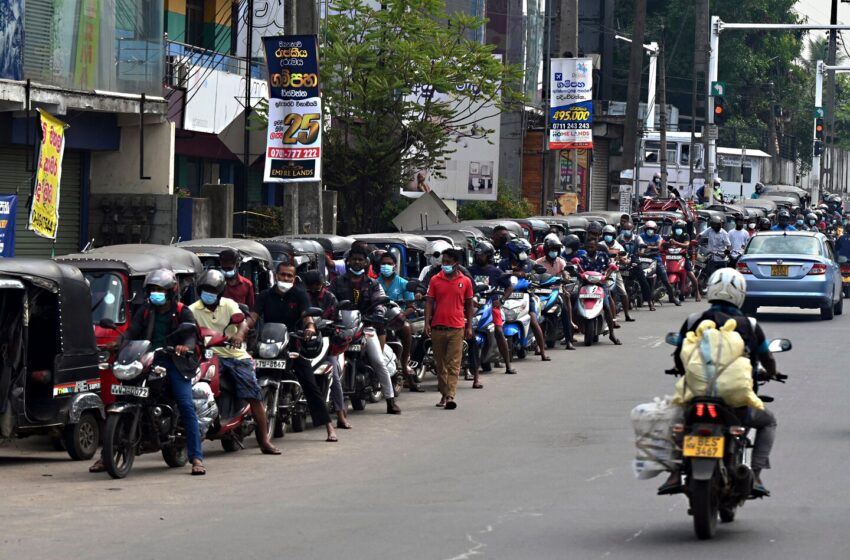 COLOMBO, Sri Lanka — Sri Lanka announced Tuesday it would suspend payments on its foreign debt, an extraordinary step that underscores the crisis facing a government that is struggling to contain soaring inflation, large-scale protests and a potentially looming humanitarian disaster on an island of 22 million people.

Although the announcement marks Sri Lanka’s first default since its independence in 1948, the move has been increasingly expected by international markets, particularly in recent months as the country struggled to import fuel, food and even medicine as its foreign currency reserves dwindled. From the coastal capital, Colombo, to the central highlands, tens of thousands of angry protesters have taken to the streets for weeks to demand the resignation of President Gotabaya Rajapaksa, whose family has maintained an iron grip over the island’s politics for much of the past two decades.

The Rajapaksa government — led by Gotabaya Rajapaksa and his brother, Prime Minister Mahinda Rajapaksa — is seeking a bailout from the International Monetary Fund at a meeting in Washington scheduled for next week. Its economic team, recently reshuffled under mounting public pressure, has said it is taking steps, including raising interest rates and devaluing the Sri Lankan rupee, to convince international creditors that Sri Lanka will be able to resume payments if given time to contain the economic meltdown.

Sri Lanka’s external debt totals $51 billion, and it has about $7 billion in payments due this year.

“The effects of the Covid-19 pandemic and the fallout from the hostilities in Ukraine have so eroded Sri Lanka’s fiscal position that continued normal servicing obligations has become impossible,” the Finance Ministry said in a statement. “The government has taken extraordinary steps in an effort to avoid a resort to these measures, but it is now apparent that any further delay risks inflicting permanent damage on Sri Lanka’s economy.”

Murtaza Jafferjee, head of the independent Advocata think tank in Colombo, said the Rajapaksa government had been “in denial” for years as the country’s economy declined.

Rajapaksa announced steep tax cuts — a promise made during his 2019 campaign — while Sri Lanka’s trade deficit plunged in recent years as tourism, a crucial source of foreign currency, evaporated during the coronavirus pandemic. As Sri Lanka’s dollar reserves dried up and inflation began to bite, residents have borne the brunt of a 30 percent rise in food prices and lines at gas stations lasting hours every day. In recent days, some officials have warned about the possibility of mass hunger.

The people of Sri Lanka “have made sacrifices until we completely ran out of reserves and had to do this,” Jafferjee said. “The people are in a terrible state.”

The only comfort, Jafferjee added, was that Rajapaksa recently installed “a more decisive economic team that is literally throwing the kitchen sink at the problem.”

Rajapaksa, whose younger brother Basil previously served as finance minister, shook up his cabinet on April 4 and appointed three trained economists to an advisory team on the economy three days later. The government also recently announced steps such as sharply hiking interest rates.

In an interview before the default announcement, Ali Sabry, the finance minister appointed by Rajapaksa on April 4 to replace his brother, said he did not believe that Sri Lanka would face mass shortages of food and medicine and that the government was in talks with multilateral institutions including the World Health Organization, as well as neighboring countries such as India, about emergency supplies in case of a crisis.

Sabry said he was negotiating with international lenders, including foreign governments, to delay debt payments and offer material help if a food or medicine shortage arose, Sabry said. “It’s in no one’s interest that Sri Lanka’s situation deteriorates further,” he said.

Still, the government’s moves in recent days have not placated opposition politicians, who are demanding that Rajapaksa’s presidential powers be stripped — or that he and his family members, who maintain a majority of supporters in Parliament, leave the political scene altogether. The deadlock has led to uncertainty about who might lead Sri Lanka in the future, which could unsettle international lenders at a moment when Sri Lanka is seeking to project stability, political and economic observers say.

Rajapaksa’s continued hold on power, meanwhile, has riled protesters who have camped around-the-clock in front of the president’s office in central Colombo, chanting and holding placards demanding that he “go home” and return money he allegedly stole to the people of Sri Lanka.

On Saturday, the waterfront swelled with mostly urban professionals voicing their frustration. Among the protesters was Ray Anthony, 64, who said he barely managed to survive on $100 a month serving tea at a tech company before he lost his job last year.