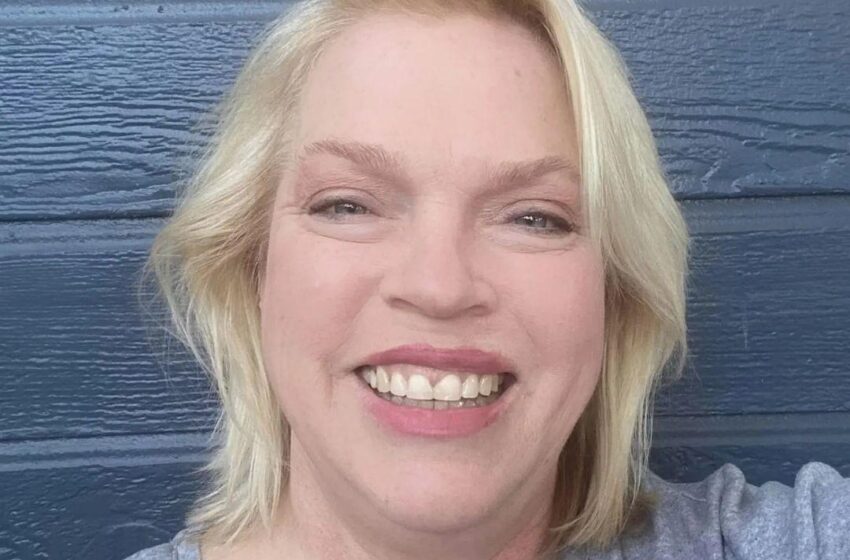 Sister Wives’ Janelle Brown Gushes About Being A Grandmother

Janelle Brown loves her grandkids as much as her kids, or even more! She says her children are her whole world and cherishes every moment she has with her grandchildren.

The “Sister Wives” star has been spiritually married to Kody Brown for twenty-seven years, and they share six children; four sons and two daughters. The TLC star also has a granddaughter and grandson.

Janelle calls grandparenting the best thing ever, as her latest Instagram post shows her spending quality time with her granddaughter Evangelynn’ Evie’ Kodi.

Under a picture of sweet little Evie giving her a bite from a tasty-looking donut, Janelle wrote, “Everything they say about being a grandparent is so true. We know?!?! Evie is so sweet. She always insists on giving me a bite of whatever she is eating.”

The pair were captured wearing long-sleeved blouses; Janelle’s was a blue patterned one while Evie’s was plain white. They were leaning on a tabletop as the youngster looked at her grandma eating the donut.

The reality star credited life photographer Haley Manning for taking the shots and concluded the caption with some related hashtags showing her love for donuts and family time.

Being a grandmother suits Janelle well, and fans agree. They also noted that that was the best experience as she got to enjoy precious times with her grandkids.

A fan mentioned that the onscreen celebrity reminded her of Marilyn Monroe, and she appreciated the compliment. Other fans shared their stories of being a grandparent, revealing the joy that came with the title.

Evie is the child of Janelle’s daughter Madison Brown Brush and son-in-law Caleb Brush. She also has a sibling named Axel James.

PEOPLE shared that the doting grandmother has been motivated to care for herself because of her two grandkids because she loves watching them grow up and being a part of their lives.

In the past few months, she has shown how important the youngsters are to her by hanging out more often. One of their hangout spots was Disney World, where Christine Brown and her kids joined the trio.

Janelle shared a snap of their trip, stating, “First Disney World vacation with the grandbabies in the books.” She later mentioned being tired, happy, and grateful for their adventure as she watched Evie sleep and cuddle her “Frozen” toys.

In addition to Axel and Evie, another grandchild in the Brown family is Avalon, who Christine’s daughter Mykelti Brown Padron shares with her husband, Antonio ‘Tony’ Padron.

Since Christine announced her separation from Kody last November, she has been gushing about being a grandma like Janelle.

Following Avalon’s birth, she expressed, “I adore being an Oma. It’s so rewarding watching your children become incredibly amazing parents and then getting this wonderful bundle of love along with it.”

The Browns are a polygamous bunch whose lifestyle is broadcasted on TLC’s reality series “Sister Wives.” It details the lives of Kody, his four wives [Meri, Janelle, Christine; now ex-wife, and Robyn], and their eighteen kids.

In The Blast‘s previous report, the patriarch expressed doubts about his lifestyle. He could not help but examine the effects of polygamy whenever he had conversations with polygamous women who were “struggling in it because of the pain.”

Due to the family’s struggles, he further questioned God’s reason behind him living a plural marriage as the lifestyle had become “a mess now.”

Rather than questioning the lifestyle, Christine ditched it even with the numerous years she has spent living that life as she now has an open distaste for polygamy. She stated:

“Yea, I don’t want polygamy, that’s for sure. Part of the reason I’m sure that I’m leaving is because I don’t believe it’s for me anymore. I don’t.”

The TV icon continued, “God’s like, ‘No girl, you did it; you can go.’” Kody is not so taken with her decision as he previously said that he believed she was “living two lives.”

Regarding the “living two lives” statement, he revealed that she was publicly promoting the polygamous lifestyle but privately saying she wanted to leave.

The former couple was married for over two decades, but unfortunately, they grew apart in the union. The pair share six children, namely Aspen, 26, Mykelti, 25, Paedon, 23, Gwendolyn, 20, Ysabel, 18, and Truly, 11.