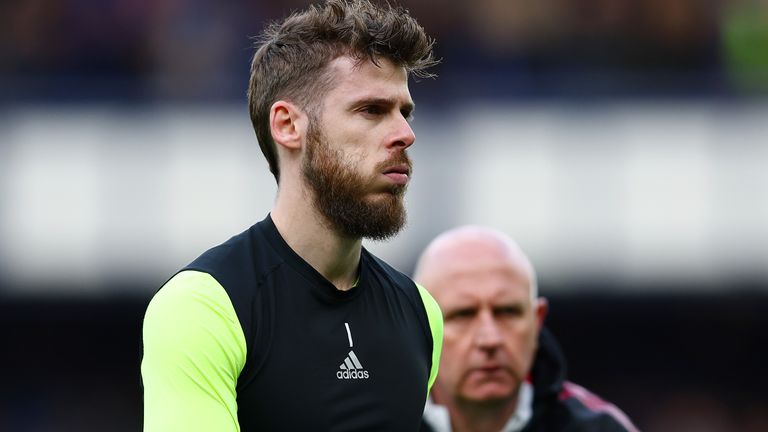 Man Utd’s Cristiano Ronaldo has apologised for his ‘outburst’ after appearing to throw a fan’s phone to the ground following his side’s defeat at Everton.

Footage, taken by @EvertonHub, shows Ronaldo lowering his right hand towards the ground before what appears to be a phone colliding with and bouncing up off the surface, as he exited the pitch following the 1-0 defeat at Goodison Park.

The fan’s mother has claimed he was left “bruised” by the incident, which left the youngster “in complete shock”.

Speaking to the Liverpool Echo, Sarah Kelly said her 14-year-old son Jake Harding is autistic and “didn’t really digest what was happening” until he got home.

“He’s really upset about it, and it’s completely put him off going to the game again,” she told the paper. “This is the first football game he’s been to and this has happened.”

Jake, she said, wasn’t waving his phone in Ronaldo’s face – and it was down by the floor when the Portuguese striker moved towards it. She also shared an image of her son’s hand with the newspaper, in which it appeared red and bruised.

Merseyside Police have now launched an investigation, a spokesperson confirmed.

“We can confirm that we are liaising with Manchester United Football Club and Everton FC following reports of an alleged assault at the Everton v Manchester United football match at Goodison,” a statement read.

“As players were leaving the pitch at 2.30pm, it was reported that a boy was assaulted by one of the away team as they left the pitch.

“Inquiries are under way and officers are currently working with Everton Football Club to review CCTV footage and are carrying out extensive witness enquiries to establish if an offence has taken place.

Manchester United have confirmed they are aware of the matter.

A club spokesperson said in a statement: “We are aware of an alleged incident after today’s game at Everton and the club will co-operate with any police inquiries.”

Ronaldo had earlier apologised for the incident on Instagram and invited the fan to a match at Old Trafford.

He said on Instagram: “It’s never easy to deal with emotions in difficult moments such as the one we are facing. Nevertheless, we always have to be respectful, patient and set the example for all the youngsters who love the beautiful game.

“I would like to apologise for my outburst and, if possible, I would like to invite this supporter to watch a game at Old Trafford as a sign of fair-play and sportsmanship”

United are aware of the footage, which was widely shared and discussed on social media following the game.

It was a bad day on the pitch for Ronaldo and Manchester United as Anthony Gordon’s first-half goal gave the hosts three points.

United, who have won just once in five Premier League games, now look unlikely to qualify for the Champions League next season.

David de Gea described Manchester United’s defeat to relegation-threatened Everton as “a disgrace” after their season reached a new low at Goodison Park.

“It’s a disgrace from us, to be honest, we should win the game,” De Gea told BT Sport.

“We don’t create, that’s the problem. We don’t even create proper chances to score. I don’t know what to say, to be honest.

FREE TO WATCH: Highlights from Everton’s win against Manchester United in the Premier League

“We’re not good enough, that’s for sure. It’s going to be very difficult now to be in the top four.”

United, who last played a week ago as they drew 1-1 with Leicester, were outfought by Everton despite the hosts having just two full days of recovery following Wednesday’s crushing 3-2 defeat to relegation rivals Burnley.

“We knew before they were struggling, but how difficult it is to play here even when they are not in a good mood, but they play with more desire,” he said. “They played on Wednesday, they were tired, they were a bit nervous, you could feel it, and even with that we lose the game.

“Of course it’s not the perfect atmosphere. But you could see they were tired, they were nervous, and come on, they keep going and keep fighting to win. They had more desire than us. That is not acceptable, and it’s very sad to lose today.”