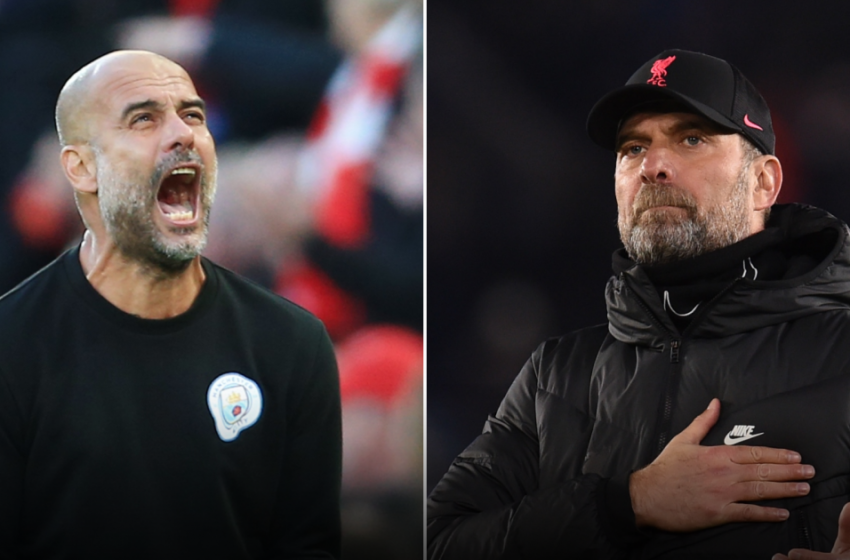 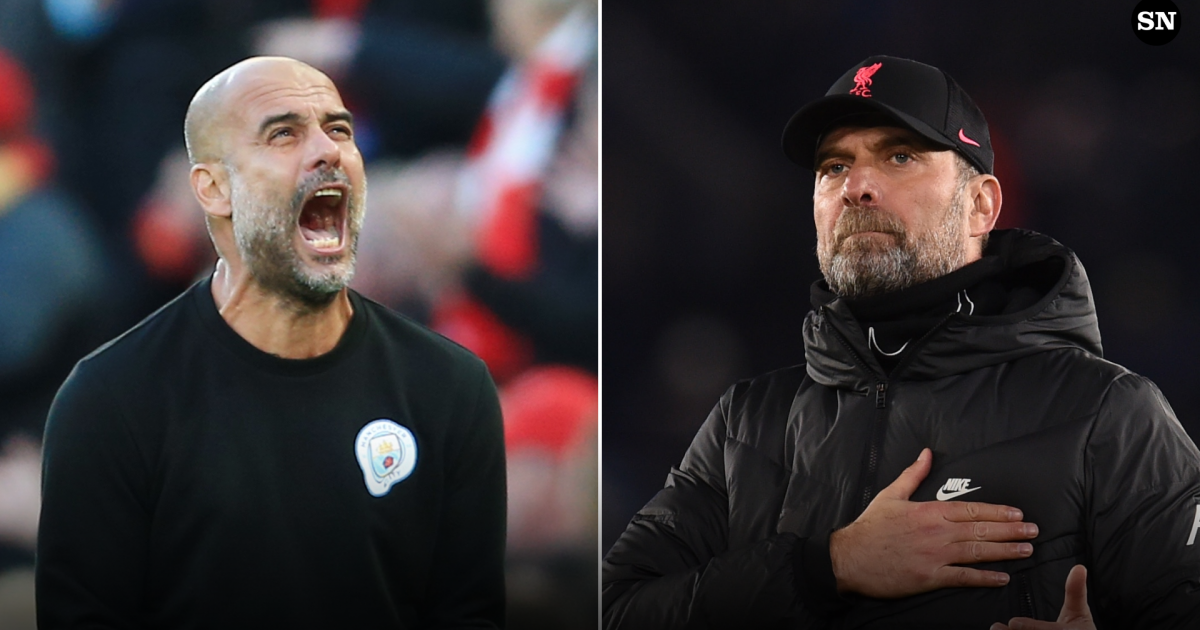 When Liverpool travel to the Etihad to perhaps decide the 2021-22 English top flight crown, managers Pep Guardiola and Jurgen Klopp will face off in one of the biggest Premier League games in recent memory.

There is just one point separating the two teams, with City on 73 points to Liverpool’s 72 points after 30 games. These two teams have gone toe-to-toe many times over the past few seasons across multiple competitions, but the April 10 match stands above in terms of league importance to this point.

The two managers have plenty of history, and while the two Premier League sides have much to do with that, it goes back further than just meetings between the Reds and Citizens.

The two began their head-to-head history as managers of Bayern Munich and Borussia Dortmund, sharing big moments and big results between them across both the Bundesliga and German Cup. That transferred to England as Klopp moved to the Premier League in 2015 and Guardiola followed a year later. Now at the helm of the two best teams in England, the legendary managers are battling it out every year once again.

How will Sunday’s match add to the storied history between the two all-time great coaches?

MORE: When do Man City and Liverpool play in Premier League?

When there’s smoke, there’s fire. Whether some debate the merits of this “rivalry,” the volume of matchups tells a story.

The 22 meetings between the two rank top on Klopp’s head-to-head and tied for second on Guardiola’s list behind only Jose Mourinho.

What did Pep Guardiola and Jurgen Klopp say about each other?

The budding rivalry between the two bosses has been a significant point of discussion in the build-up to the April 10 showdown. The two exchanged niceties, with Klopp calling Guardiola one of the best managers of all-time.

“I respect a lot what they [City] do, it’s an insane football team,” Klopp said in his pre-match press conference on Thursday. “And, for me, the world’s best manager.

“So, that’s a combination which makes it quite tricky. But, the good news, they are human beings as well. If I would be a different person I would be, probably, a little bit depressed about the fact that Pep Guardiola is constantly coaching these kind of teams. Maybe in Dortmund we could’ve won more titles if Pep wouldn’t have been at Bayern.

“Now, it is pretty much the same, imagine if he would not be here, we probably could’ve won at least one more league title. But I am not like this, thank God. So, I am completely happy with our situation.”

Guardiola shook that thought off, but had similar compliments for his counterpart.

“Thank you so much, but I’m not [the world’s best manager],” Guardiola said. “I would like to tell him I’m the best, but I’m not.

So can this be a rivalry with such kind words being thrown around? Pep thinks so.

“In the last five years they have been the biggest opponent,” Guardiola said in his pre-match press conference. “Jurgen, as a manager, has been the biggest rival I’ve ever had in my career and I think what both teams propose is good for football.

“I will remember my period here, when I’m retired watching and playing golf, I’ll remember my biggest rival was Liverpool, for sure.”

How many trophies have they won?

Oddly enough, the two managers have only met once — well, three times, if you count season-opening showcases — in a final with silverware directly on the line.

But the two bosses have had plenty of meetings that eliminated one or the other from contention for trophies.

Pep Guardiola has the edge when it comes to his trophy haul, although many of them came from his days at Barcelona before the two had ever met.

Klopp edged Guardiola in cup competitions during their time in Germany, while Guardiola held the Bundesliga league title on lockdown most of that time.

In the Premier League, it has been largely the same, as Klopp has seen more European success while Guardiola succeeds in league play plus a run of EFL Cup crowns (Carabao Cup).

Most memorable matchups between Guardiola and Klopp

Jurgen Klopp gave Pep Guardiola a rude welcome to German football after the Spaniard moved to Bayern Munich in 2013.

In the season-opening DFL-Supercup, Marco Reus scored a brace, and Ilkay Gundogan — an eventual Guardiola disciple at Man City — bagged the eventual game-winning goal to give Borussia Dortmund a 4-2 victory, with Arjen Robben scoring a brace in the defeat.

The back-and-forth match proved an exciting harbinger to what would become an electric rivalry. It also marked the first of two Super Cup meetings, as Klopp would win both.

Pep Guardiola would complete a domestic double in the 2013-14 season, finishing a massive 19 points above second-place Dortmund to win the league, and a Der Klasikker win in the DFB Pokal final sealed the deal.

While the 90 minutes of regulation finished scoreless, Arjen Robben scored in the 107th minute to put Bayern ahead and Thomas Muller added to it in the 121st minute to seal the silverware.

While Bayern Munich romped to a resounding Bundesliga title in 2014-15, with Borussia Dortmund finishing a disappointing seventh, Jurgen Klopp would still have his say in the season.

The two sides met in the DFB Pokal semifinals, and while Bayern went ahead in the 29th minute through former Dortmund striker Robert Lewandowski, Pierre-Emerick Aubameyang tied it in the 75th minute. The match went to penalties, and in a memorable shootout that saw Bayern fail to score a single effort — Philipp Lahm, Xabi Alonso, and Manuel Neuer (!) all missed and Mario Gotze’s effort was saved — and Dortmund went through on the back of shootout conversions by Gundogan and Sebastian Kehl.

For all the matchups between the two over the years, they have only met once — well, twice, across one two-legged matchup in the 2017-18 quarterfinals — which saw Jurgen Klopp’s Liverpool advance to the semis and eventually the final, before a loss there to Real Madrid.

The series between Liverpool and Man City was won in the first leg at Anfield, where Mohamed Salah scored one and assisted another and Liverpool won 3-0. The second leg was a fascinating matchup made more exciting when Gabriel Jesus opened the scoring for Man City to give the hosts a chance, but Liverpool held firm and Salah scored a fabulous goal to put the match out of reach.

The second-most lopsided result of the managerial rivalry (behind 2017’s 5-0 Man City league win) saw Man City set the tone early for its eventual 2020-21 Premier League title run with a resounding victory at the Etihad.

It was a comprehensive result, with three different goalscorers for Man City plus an Alex Oxlade-Chamberlain own-goal to round things out. City would finish 12 points atop the Premier League table when it was all said and done, with Liverpool a distant third 16 points back.

After a 0-0 draw in October that set the stage for the 2018-19 Premier League title chase, the two teams met in January still jockeying for position atop the table.

While May was still quite a ways away at that point, and neither side would know just how close they would finish — a single point apart in the final standings — Man City fought to a 2-1 win on the back of Leroy Sane’s 72nd minute winner at the Etihad. Those three points proved absolutely critical as Man City would finish on 98 points, just a single point ahead of the Reds at the end of the season.

This campaign’s reverse fixture at Anfield was back-and-forth, with a scoreless first half giving way to a wild second half.

All the stars came to play, with Liverpool goals from Mohamed Salah and Sadio Mane cancelled out by strikes from Phil Foden and Kevin De Bruyne.

.@sterling7 with a goal against his old club! 🙌#ManCity pic.twitter.com/8GKPYHfDko