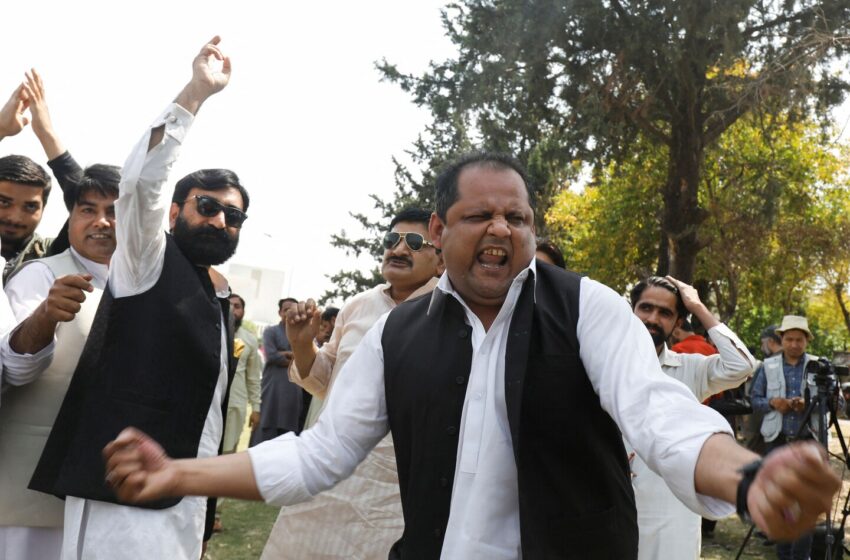 ISLAMABAD, Pakistan — Pakistani Prime Minister Imran Khan was voted out of office early Sunday morning after a tense and chaotic day in which a “no confidence” vote in Parliament was repeatedly delayed.

Khan made a last-ditch effort to cling to power, producing a document that he said proved U.S. officials had conspired against him in league with his legislative opponents.

In the end, 174 members voted to remove Khan, two more than required.

Khan has struggled for months to control Pakistan’s rampant inflation, foreign debt and other economic woes. While many of his promised reforms and civic projects sputtered, he maintained a loyal following, especially among young Pakistanis. He rejected advice from military leaders, however, and lost allies to the opposition, which slowly gathered enough support to challenge his fitness for office.

Just before midnight Saturday, the acting House speaker, Ayaz Sadiq, declared that the vote would determine whether Khan “no longer enjoys the confidence of the assembly and shall cease to hold office.” The legislators were told to move to either side of the chamber, and each signed a register to indicate their vote. The result was announced just before 1 a.m. Sunday in Islamabad.

Khan, 69, had been expected to lose the vote after a week of drama in which he fought to stay in office by dissolving the legislature and arranging to have the vote canceled on grounds that it was based on an illegal foreign conspiracy. On Wednesday, Pakistan’s supreme court ordered that the vote be held as planned, and Khan vowed to respect their ruling the next day.

But by Saturday afternoon, as pro-government legislators filibustered for hours, it became apparent that something had changed. The assembly took a lengthy break that lasted into the evening while Khan spoke at a charity function, then held a closed-door cabinet meeting.

According to the state TV news channel, Khan emerged from the meeting and informed a group of journalists that he would “not accept a new government that came from the outside” and planned to show the “foreign conspiracy” document to the supreme court justices and other senior officials.

Shortly after 10 p.m., Pakistani news stations reported that the Supreme Court would open at midnight to deal with the growing crisis. Police and paramilitary rangers were deployed around the courts and across the capital. The federal investigative agency also issued a high alert at all airports and said no Pakistani official could leave the country without special permission.

Just before midnight, the speaker of the national assembly, Asad Qaiser, said he had resigned in support of Khan, and asked all Pakistani citizens to “stand up for their country.” Qaiser said he had made the decision after being shown the secret diplomatic document. But Sadiq quickly replaced him and announced the vote would begin. By 1:30 a.m., the embattled premier had been removed from office.

Opposition leader Shehbaz Sharif, 70, a veteran politician who heads the Pakistan Muslim League party and led the legislative opposition campaign, is expected to be chosen to replace him until new elections are held within the next six months.