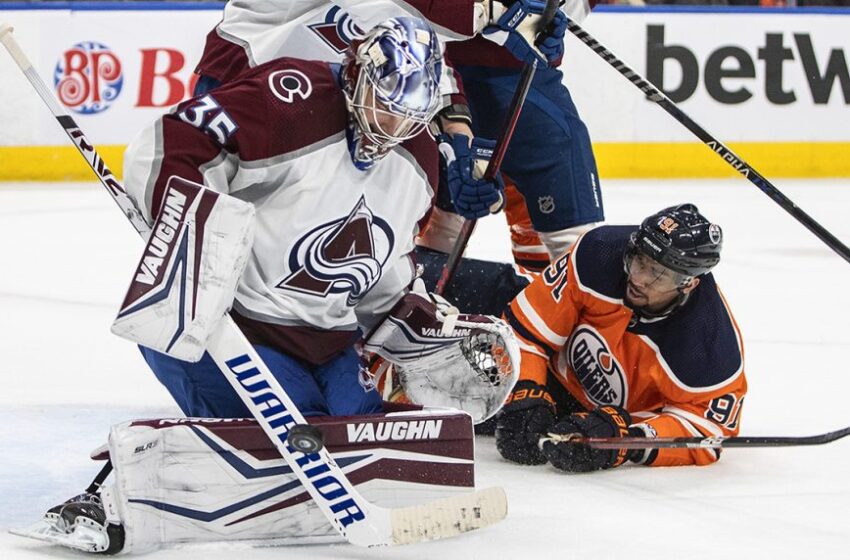 EDMONTON — Nathan MacKinnon scored the shootout winner and had his team’s lone goal in regulation as the Colorado Avalanche won their sixth straight, getting past the Edmonton Oilers 2-1 on Saturday.

Warren Foegele replied for the Oilers (42-25-6) who saw a six-game winning streak halted, as well as a nine-game run of wins on home ice.

There was no scoring in the first period, although Colorado hit three posts behind Oilers goalie Mikko Koskinen, including shots from Cale Makar and Bowen Byram.

Meanwhile, Kuemper had to make a huge first-period glove save on Jesse Puljujarvi.

The game remained without a goal through a tense first 40 minutes, with Edmonton outshooting its opponents 26-16 heading into the third period.

Edmonton finally broke the deadlock 5:24 into the third frame as Foegele deflected a long-range shot from Darnell Nurse past Kuemper. The Oilers entered the game with a 25-2-0 record when scoring first.

Colorado tied the game with 5:07 remaining in the third as a shot caromed off of Valeri Nichushkin in front to MacKinnon, who sent a backhand shot home for his 26th.

Koskinen made a couple key saves on a late Avalanche power play to send the game to extra time.

Kuemper then made a few massive saves of his own on a rare overtime power play for the Oilers, setting up the shootout. Edmonton outshot Colorado 11-0 in the OT session.

The Oilers embark on a brief two-game trip, starting in Minnesota against the Wild on Tuesday. The Avalanche return home to start a four-game homestead against the L.A. Kings on Wednesday.

NOTES: It was the second of three meetings between the two teams, with the Avalanche winning the first one 3-2 in Denver on March 21 on MacKinnon’s thrilling overtime goal. The Oilers host the Avs again on April 22 â¦ Out with injuries for Colorado were Gabriel Landeskog (knee), Nazem Kadri (upper body) and Ryan Murray (upper body), however defenceman Samuel Girard returned from a lower body injury â¦ The Oilers had their full regular lineup available.