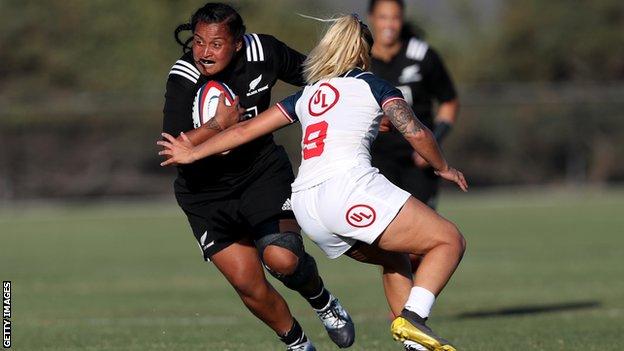 The allegations come as part of a cultural review of the Black Ferns set-up carried out for New Zealand Rugby.

The review was triggered after hooker Te Kura Ngata-Aerengamate said she had a mental breakdownexternal-link following alleged comments by head coach Glenn Moore.

Moore is “committed” to learning from the review and remains head coach.

Defending champions New Zealand will host the World Cup later this year, with the first match played on 8 October.

Ngata-Aerengamate put up an Instagram post on 8 December 2021 revealing her mental health struggles, shortly after an unsuccessful tour of Europe on which the defending champions lost twice to both England and France.

The resulting review, published on Monday, found that the player’s concerns “were not isolated and some other players (particularly Maori or Pasifika players) had either experienced similar behaviour by a number of members of management (of ‘favouritism’, ‘ghosting’, cultural insensitivities), or had witnessed it”.

When asked why they did not complain about such behaviour, some said “they were worried it would adversely affect selection chances”.

Given approximately 50% of the side are Maori and 25% are Pasifika, the review said “a greater understanding from management on how to communicate with these players in a culturally sensitive and safe manner” is needed.

One anonymous player was quoted as saying: “There needs to be selection of the best players, rather than [it] being based on favouritism.”

The report added that a focus on weight measurements rather than performance in strength and conditioning “can lead to some experiencing body shaming”.

Other issues raised by the review include:

How have New Zealand Rugby responded?

New Zealand Rugby (NZR) chief executive Mark Robinson apologised for “not having provided all the tools for our people to succeed”.

Head coach Moore said in a statementexternal-link that he would work towards “a high-performance culture” that “achieves a healthy balance” between personal wellbeing and “the pressures that come from meeting expectations and competing at an elite level of sport”.

In February, the governing body announced 29 professional contracts after part-time deals were first introduced in 2018 and a semi-professional club competition was launched the following month.

NZR said it accepted the review’s “key themes and recommendations” and Robinson added: “No one should be in any doubt about our commitment to the progression of women’s rugby in this country.

“This report highlights that we haven’t got everything right.”

NZR said it would “create additional support and resource to focus on team culture and leadership” as well as placing emphasis on “existing policies and new initiatives that focus on the health and wellbeing of players and management”.