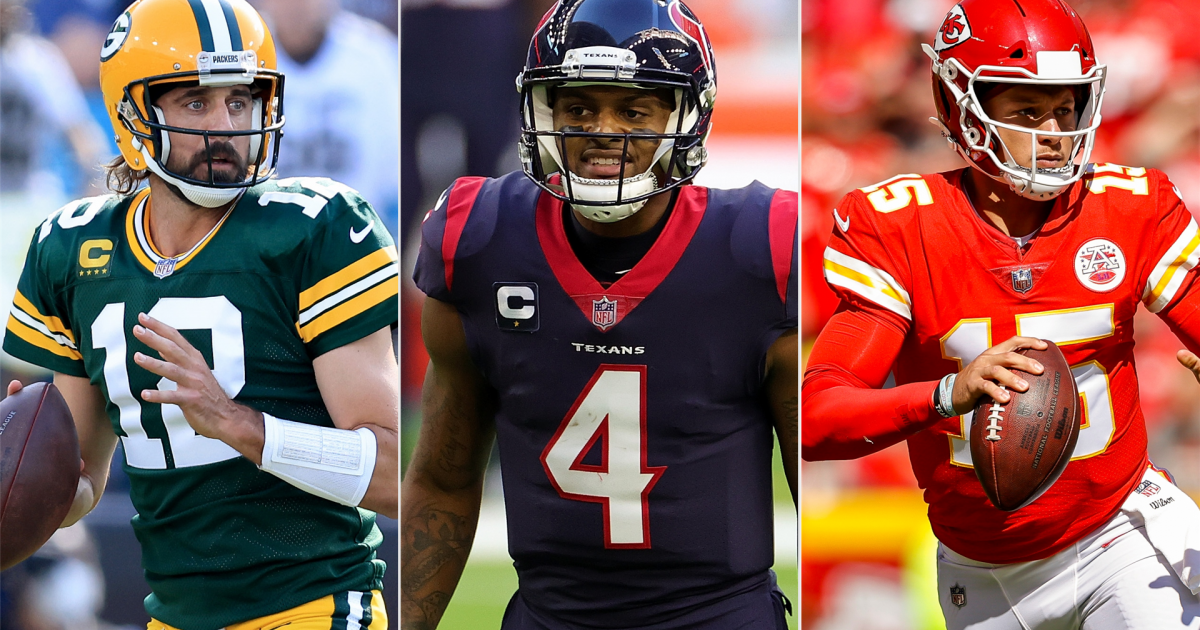 The NFL’s quarterback market has exploded over the last decade, and with good reason. Quarterback is the most important position in the league and no team wants to get stuck with spotty play from its signal-caller.

It used to be rare to see an NFL team giving out a $100 million contract. That is now standard fare for quarterbacks. That rise is partially related to an increase in overall league revenue, but it is more about the fear of losing a top-tier QB.

The NFL quarterback market has shown no signs of slowing down, either. Each year, new deals seem to one-up the last crop of extensions. Some megadeals, such as the one belonging to Patrick Mahomes, will be tough to beat, but NFL teams still find a way to compete with that top-tier contract.

The 10 highest-paid quarterbacks in the NFL have contracts totaling more than $1 billion combined. Sporting News takes an in-depth look at the league’s highest-earning quarterbacks for 2022 and how much they are making in terms of average annual value, guarantees and overall money.

(All salary numbers are via Spotrac.com unless otherwise specified).

Which NFL quarterback has the highest salary?

Before we answer that question, let’s first establish that the best way to compare salaries in the NFL is by using a contract’s average annual value. That’s the most accurate measure of a player’s worth even if not all of the money in the deal is guaranteed.

The Chiefs’ Patrick Mahomes had the highest average salary entering the 2022 offseason at $45 million per year, but he was overtaken by Aaron Rodgers and then Deshaun Watson.

Rodgers signed an extension where he is set to make an average of just under $50.3 million per year on his new three-year contract. Deshaun Watson, following his trade to the Cleveland Browns, will make more guaranteed money overall, but will average slightly less per year given the length of the deal.

Which NFL quarterback makes the most guaranteed money?

Deshaun Watson is now the highest-paid NFL quarterback in terms of guaranteed money. Watson’s new deal with Cleveland will amount to $230 million guaranteed.

He beat out Aaron Rodgers by a staggering $80 million after the Packers’ QB signed a contract with $150.6 million in guarantees over his new three-year deal earlier this week.

Josh Allen set the record prior to Rodgers and Watson with his six-year, $258 million extension before the start of the 2021 preseason. Less than a year later, he already has dropped to third place in terms of total guaranteed money.

That Watson got nearly $80 million more in guarantees than Rodgers and Allen is shocking. While the 26-year-old is extremely talented, he also comes with significant off-the-field baggage, including 22 civil and 10 criminal complaints of sexual assault and misconduct. That said, the extension was part of the trade to acquire him, so Watson had significant leverage over the Browns in contract negotiations.

NFL quarterback contracts with the most guaranteed money

Which NFL quarterback has the largest overall contract?

This is one spot where Patrick Mahomes will continue to remain supreme for quite a long time.

Mahomes’ contract is the largest among not only NFL quarterbacks, but also all NFL players. He agreed to a 10-year deal with the Chiefs that is worth $450 million. It dwarfs the NFL’s second-largest contract, which belongs to Josh Allen, by nearly $200 million.

Mahomes and Allen were the only quarterbacks in the $200 million club before the 2022 NFL offseason. Aaron Rodgers was expected to have a chance to join them, but he opted for a shorter, three-year deal that totals about $150.8 million. Instead, Deshaun Watson joined the two young quarterbacks in the $200 million club, as he agreed to a five-year, $230 million deal that is fully guaranteed.

Thirteen NFL quarterbacks are signed to deals worth more than $100 million, according to OverTheCap.com. Most of the others are on rookie-scale deals or possess high backup price tags. The middle class for quarterbacks is largely gone in terms of total value; only Kirk Cousins is being paid between $40 million and $118 million. The Vikings’ starter is on a deal worth $66 million.

Which NFL quarterback has the highest career earnings?

No NFL player has earned more during his career than Tom Brady. He managed $302.6 million in career earnings over his first 22 years in the NFL and after unretiring, he will add to that figure again during the 2022 season.

While Brady tops the list for now, he won’t hang onto that spot for long. Players like Matt Ryan and Aaron Rodgers are in hot pursuit of him and could eventually catch him given their large contracts.

Patrick Mahomes and Josh Allen will also rapidly gain on Brady with their current extensions. Mahomes projects to be No. 1 in terms of career earnings by 2028 while Allen will be No. 5 overall. Watson will also crack the top-10.