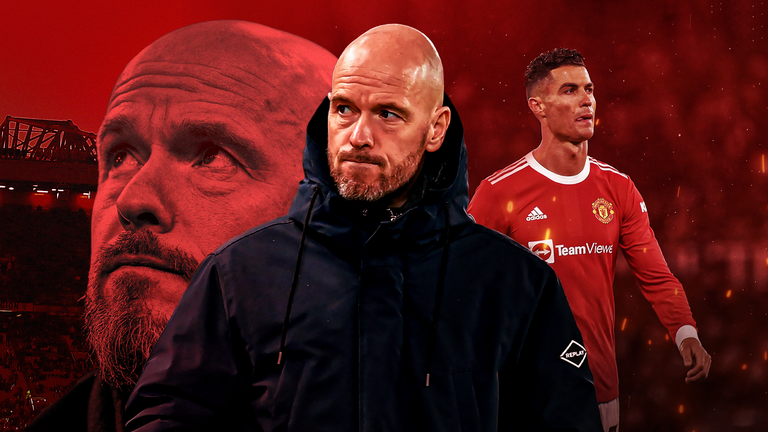 Gary Neville says he has “very few words left to say about Manchester United” following another weekend in the Premier League which demonstrated the size of the rebuild facing the club’s next manager.

Ralf Rangnick admitted Manchester United do not deserve to finish in the Champions League spots if their performance levels for the rest of the season are similar to what they showed at Everton.

United’s ambition of finishing in the Premier League top four is receding and Rangnick was left to bemoan a toothless attacking display against an Everton side that lost 3-2 at relegation rivals Burnley in midweek.

Speaking on the Gary Neville Podcast, the former United full-back bemoaned the abject performance at Goodison Park, and believes Ten Hag may even be thinking twice about taking over the reins this summer…

Imagine if Ten Hag turns his back on United?

I’ve got very few words left for Manchester United. No anger, no comment anymore. They are a bit of a farce; you almost expect it from them. The players are taking Ralf Rangnick down with them. They are bad.

They’ve got to get to the end of the season as quickly as possible. The reality is that any kind of performance in the last week against Leicester and Everton and they would have been in top four, but they haven’t got the spirit or the fight.

When I look at Manchester City and Liverpool, they have humble football players; no over-inflated egos, they understand their position, the team comes first. There isn’t one Manchester United player that would get into any of those two teams, so why would you have an over-inflated ego, think you didn’t have to work hard, or be spiritless? I don’t see anything anymore.

I’ve read in the Sunday papers that Erik ten Hag wants all of his demands met or else he won’t come to the club. Imagine if they can’t get Ten Hag over the line because of what’s happening at the moment, and how bad a state the club are in.

If you look at what Manchester United are doing to players, there isn’t one who has grown. Look at what they did to Donny van de Beek. If you’re Ten Hag, I think you’re on the phone to Van de Beek. What’s it like there, Donny? He’s not saying anything good, is he?

I suspect Ten Hag’s demands aren’t financial, they will be about control, recruitment, structure, youth. I suspect he wants to come in and make sure he’s not exposed to what other managers have been exposed to in these last 10 years.

That might be too much for Manchester United, and I suspect it may be difficult week or two for the club. I still think they will get it over the line, but the reports this morning were that Ten Hag was placing demands on the club that maybe go above and beyond. We shouldn’t believe everything but, ordinarily, when things come out from credible sources we normally know.

I’m living on the feeling that the club one day will return. The club will rise again but this is getting low, real low.

The old adage is not to believe anything we read in the press but that is false, journalists hear things from somewhere and if there are multiple sources saying the same type of story there is usually something in it.

Things have all gone quiet on the Mauricio Pochettino front, so it all feels like it’s all eggs in the Ten Hag basket. If they cannot get him over the line because of his demands on the way the club is run, what a position for Manchester United to be in.

‘Rangnick’s reputation wounded – this is getting real low’

Ralf Rangnick came with an incredible reputation but he’s now starting to be wounded by what’s happening around him and he looks weaker and vulnerable on the touchline due to the performances of players on the pitch, who have nothing to do with him.

Ole Gunnar Solskjaer is a good man, the players liked him and yet they turned him over. It’s a real difficult position for the club to be at.

I feel like most Manchester United fans at this moment in time in that I don’t know where to turn next or what’s going to happen.

I’m living on the feeling that the club one day will return. The club will rise again but this is getting low, real low. But it will come back, and you look forward to that day.

I do believe players want to do well, but what they are showing at this moment in time is nowhere near good enough.

Neville on Man City vs Liverpool…

FREE TO WATCH: Highlights from Manchester City’s draw with Liverpool

Before the game, I thought a point would be better for City, but at half-time, the game could have been out of sight. The response from Liverpool in the second half was exceptional after being so poor, so below the standard in the first half. I always remember playing under Sir Alex Ferguson, if we played badly in the first half of a big game at the end of the season he would ask if we’d fought all season to play like that.

It was almost as if at half-time Jurgen Klopp had to say, ‘come on, we’ve built this team for three or four years and yet you’ve shown no authority, you’ve frozen, you’ve defended poorly’.

I have to say, Liverpool responded brilliantly, and at the end of the game, considering where they were at half-time [it was a better point for Liverpool].

But City could have won the title today had they won the game; I don’t think Liverpool could have because they have harder remaining games. But things move on, it wouldn’t surprise me if both teams won every game until the end of the season and Liverpool are sat thinking ‘I wish we played better in the first half?’ But we don’t know, there is still a long way to go.

It was frenetic. Punch for punch. Some of the football we watched were exceptional, they put pressure on each other. Their defences pushed up so high. They stay true to their manager’s principles, and they don’t wilt. Liverpool have got real guts, they are streetfighters.

What we saw in that second half was just the energy, passion, spirit, and fight that we have seen from Liverpool to come back. But City are a brilliant team, you can’t really speak highly enough, there are no more words for these two in terms what they have achieved over the last few years. And they are going to go it in these last few weeks, hell for leather in the FA Cup, Champions League and Premier League.

Is it really a truly great sporting rivalry? 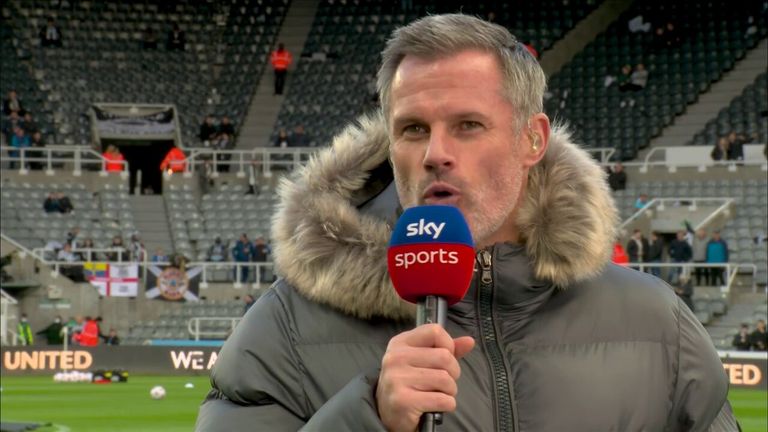 Jamie Carragher says there is more respect between Liverpool and Manchester City compared to other great Premier League rivalries.

It’s an unbelievable rivalry – 338 versus 337 points. In terms of consistency, quality, and excellence, this has a case to be the greatest Premier League rivalry of all time.

But when I think about rivalries, I think there has got to be more to it than that. Is there ferocity, intensity, a story to tell. When people talk of the Sir Alex Ferguson-Arsene Wenger rivalry there were incidents and stories to tell – the tunnel incident at Highbury, the FA Cup semi-final with Ryan Giggs’ celebration, the Marc Overmars goal at Old Trafford that wins the title. 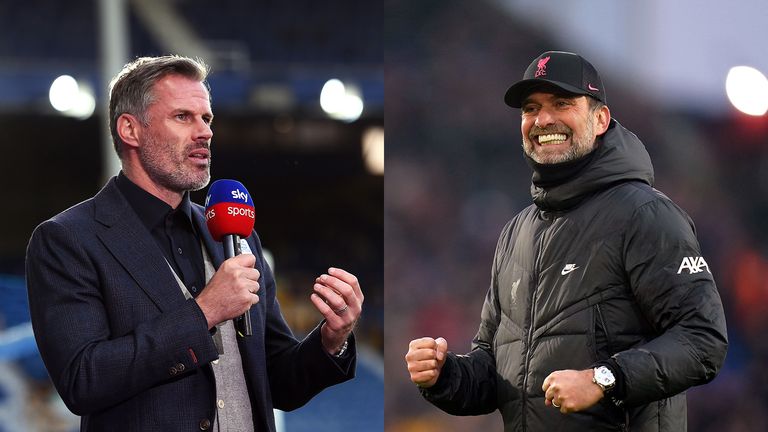 Jurgen Klopp was happy to agree with Jamie Carragher that the rivalry between Liverpool and Manchester City is the best the Premier League has seen.

There were big moments between the two teams along with ferocity, fights, pizzas! There was more than just football excellence, so I don’t think this Manchester City and Liverpool rivalry beats that yet. There were too many hugs – they like each other too much! I’m only joking, of course, but whether this will be a documentary in 25 years I’m not too sure. But in terms of excellence and consistency, it is an excellent rivalry.

I admire what they are doing, it is absolutely brilliant, and the performance levels are high. You want to see this season go right to the death, you want to see both teams in the Champions League final, because when you think about the two best teams in Europe at this moment in time, it’s these two competing in the Premier League, the FA Cup, and hopefully in the Champions League, they deserve it. 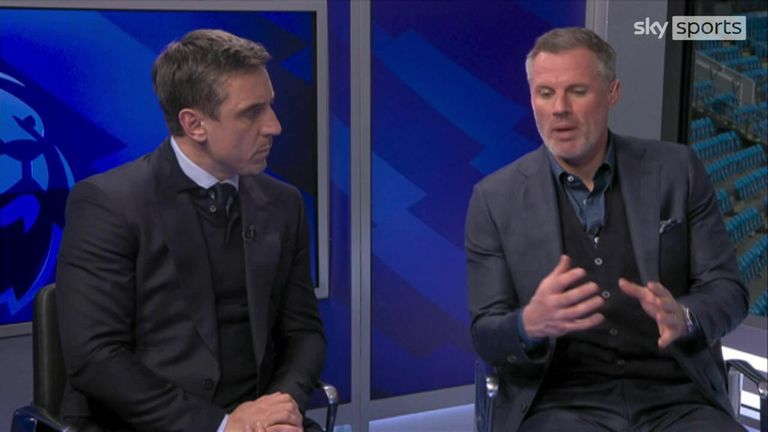 The Super Sunday panel discuss what trophies Jurgen Klopp and Pep Guardiola still need to win with Liverpool and Manchester City to be defined as the greatest teams.

They really are out of this world, but in different ways. Guardiola in a transformational way for what he has achieved, his type of football, and the influence he has had on the game. And Jurgen Klopp for his spirit and passion, pure football streetfighter.

I see more of myself in Klopp than Guardiola, I don’t think I could play in this City team, I wasn’t technically gifted enough. But you can see characters like Jordan Henderson and James Milner who play for Liverpool with fight and spirit, while City are just a thing of beauty. Other than the fact they are the teams I dislike the most you have huge admiration and respect for them because you cannot help but like what you watch when you see them.