WASHINGTON (AP) — As a Jewish forward for the Washington Wizards, Deni Avdija was naturally going to be asked about Kyrie Irving.

Especially when his team just finished playing against the Brooklyn Nets.

Avdija said Friday night he tries to stay positive in the face of antisemitism, but he also believes there should be consequences for players’ actions. The 21-year-old from Israel spoke for a few minutes in the Washington locker room after the Wizards lost to the Irving-less Nets.

Brooklyn suspended Irving on Thursday for posting a since-deleted link to an antisemitic work. The fallout from his post continued Friday with Nike announcing the company has halted its relationship with Irving.

Avdija is in his third NBA season. He’s the league’s lone Israeli-born player.

“I’m Jewish, and I love my culture, I love my country,” he said. “It’s a little upsetting to hear some stuff about your religion. Just spread love, man. Love everybody, love all cultures.” 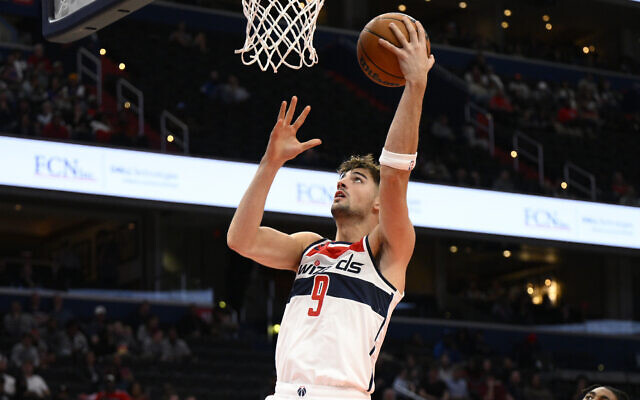 Washington Wizards forward Deni Avdija (9) in action during the first half of an NBA basketball game against the Detroit Pistons, October 25, 2022, in Washington. (AP Photo/Nick Wass)

Avdija talked about the support he receives from the Jewish community and Israelis around the world. He was asked how often he’s had to deal with antisemitism.

“In terms of things like that, it’s always going to be there. It will never go away,” he said. “It’s just, if you want to pay attention to the stuff or you just want to keep moving and focus on the important stuff in life. I’m a positive guy. I’m not looking for the bad things.”

Avdija was supportive of the punishment for Irving.

“I think there need to be consequences for the actions that players do,” he said. “I don’t know the amount, the punishment that the league gives, but I think it needs to be known that there’s no room for words like that.”

Kyle Kuzma, Avdija’s teammate, caused a bit of a stir when he tweeted, “Can’t even tell the truth no more,” on Friday. He said that was in reference to a personal matter and not Irving’s situation.

“It’s probably bots at this point. I don’t know who is behind the mic, who is behind the tweets,” Kuzma said. “But there were a few of those. But it all stems from just wrong place, wrong time, misinterpretations, so I get it. It’s not the end of the world.”