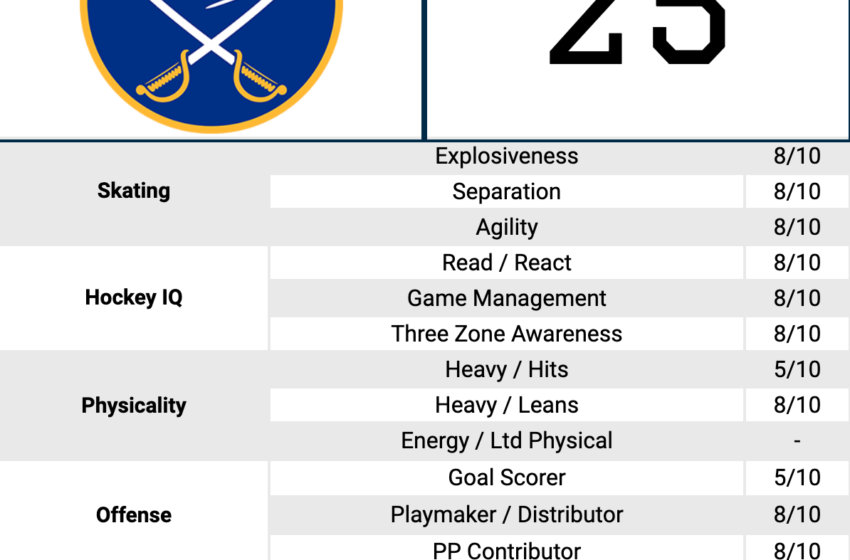 NCAA Signings: How Power, Beniers, Johnson project in the NHL

As seasons have ended for NCAA teams, top college players have been signing deals with NHL teams. We looked at what the projected impacts were for some early signings a couple weeks ago, and now that the Frozen Four is over, more players have and will join NHL teams. Some of them have been identified as free agents, but the majority who’ve signed in recent days are drafted players who are joining the NHL teams that selected them and have been involved in their development.

I have read comments from some of our readers and there seems to be some confusion on how the signing process works for college players. So, here is the Coles Notes version of how entry level contracts work with these players:

1. A college player is eligible to sign his entry-level contract after his freshman year. If he is between 18-21 years old his contract will be the traditional three-year entry level deal. The terms of the deal are negotiated with the player and the team and will include the player’s base salary, signing bonus and performance bonus potential.

2. A college player 22-23 years old is required to sign a two-year entry-level contract.

3. College players who are 24 years old are eligible to sign a one-year entry-level contract.

4. All entry-level contracts are for players under 25 years of age are two-way contracts

Most players coming out of college at this time of year are requesting at least one NHL game as a provision for them to sign their contract. This strategy allows the player to “burn a year” off his entry-level contract and get one year closer to free agent status down the road.

(E.G. Matthew Beniers signs with Seattle. His entry-level deal is the traditional three years. He is guaranteed NHL games this season, which means he will “burn” the 2021-22 year off his contract (although he will only play a limited number of games between now and the end of the Kraken schedule). His second season will be 2022-23. His third 2023-24. And then he’ll become an RFA after the 2023-2024 season.

With all that in mind, here is a look at some more recent NCAA signings and how they project as players in the NHL.

A complete player, Power is an excellent skater. He utilizes his long reach and size to his advantage on the defensive side. Offensively he adds another layer with and without the puck. More of a distributor than a shooter, he’s the kind of talent a franchise can build around. Elite hockey “IQ”. Has the potential to have a Victor Hedman-type impact for Buffalo in time.

Seattle gets a player with the potential to become a top line scoring forward. Used at even strength, on the power play, 4-on-4 and in OT at the college level. His defensive game is average so he is not likely going to be used on the PK at the pro level. Plays the game quick and fast. His hockey sense is elite in the offensive zone. He finds space to create Grade A scoring chances and results. He will be challenged physically and needs to add more strength/weight this off-season.

Another college prospect who comes to the NHL with significant upside to produce offence. His element is clear: Johnson has benefited from experience playing at the college level as well as representing Canada at the WJC and Olympics, where he had five points in four games. He’s sneaky quick and fast. Having said that he does pick his spots at times and could be more impactful at 5-on-5 over the full 60 minutes. As he adds more strength to his frame (he’s very light right now) it will assist with his impact as long as he competes hard overall. Can’t teach his hockey sense in the offensive zone. Johnson could be a solid top-six forward in time.

He’s undersized, but dynamic with the puck on his stick. There is no question this player has the ability, compete level, and hockey sense to be a productive NHL player. But will his unusual skating stride translate to the NHL game? So far, he has proven everyone wrong every step of the way on his development path. It will be interesting to monitor his impact.

By now we know the Leafs place value on players who are small by NHL average (Nick Roberston, Semyon Der-Arguchintsev, Roni Hirvonen, Topi Niemela, Axel Rindell, Mac Hollowell, Nick Abruzzese). Max Ellis is small in stature (5-foot-9, 160 pounds) but he’s an energetic, competitive, infectious player who empties the tank every time his number is called. The Leafs recently added Colin Blackwell to their lineup at the trade deadline. Ellis, who is starting in the AHL, brings a similar approach.

Keeping an eye on…

Erik Portillo, G: Buffalo (third round, 67th overall, 2019): It’s not my role to speculate what happened with his negotiation process and the reason he is going back to Michigan. I do believe the extra year of college will help him more than hurt him. His crease composure and lateral quickness needs to improve for the NHL game. Hopefully the Wolverines will have a full-time goalie coach on staff to assist with him and the rest of the puck stoppers at their program.

Aiden McDonough, LW: Vancouver (seventh round, 195th overall, 2019): He has a chance to open some eyes in Vancouver after next season. He will be a senior at Northeastern so there is always risk the player may choose to go elsewhere. He’s a 6-foot-3 goal scorer (25 in 38 games this NCAA season), but his skating still needs work to translate to the NHL level. He’s already a great pick by the Canucks. He’s getting a contract one way or the other after his senior year. If he puts in the work and improves his pace, here’s hoping he signs with the Canucks.