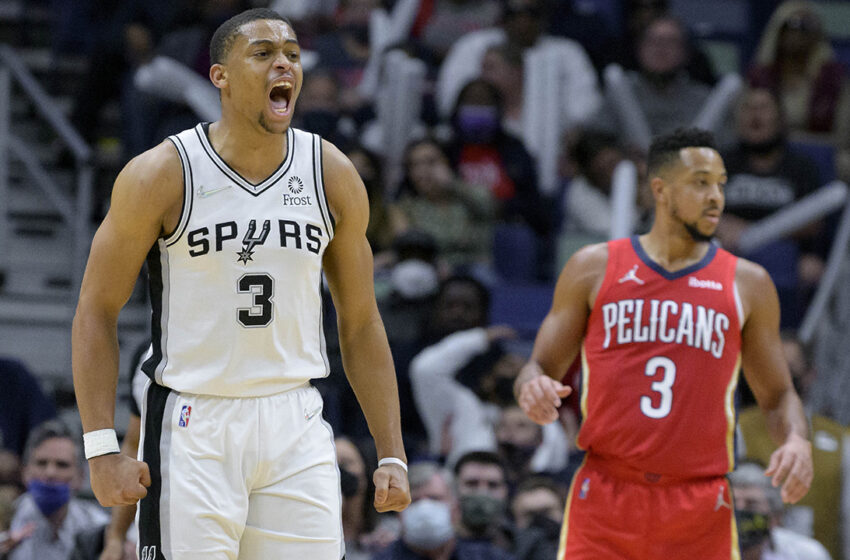 NBA Play-In 9 vs. 10 Previews: Can the Hawks salvage their disappointing season?

The NBA Play-In Tournament is back for a second consecutive season.

On Monday, we previewed the No. 7 versus No. 8 matchups, which take place Tuesday. Now it’s time for the No. 9 and No. 10 tilts set for Wednesday.

Under the league’s previous format, none of these four teams could have made the playoffs. With the play-in, it’s still an outside shot — each needs to win two consecutive games, one of which is against a seventh or eighth seed — but the Memphis Grizzlies did it last season by defeating the San Antonio Spurs before Ja Morant went off for 35 points to down the Golden State Warriors.

Since it’s only the second season, here’s a quick refresher of the tournament format:

• The No. 7 and 8 seeds of each conference play, with the winner determining the seventh seed.

• The No. 9 and 10 seeds play, with the loser going home and the winner staying alive.

• Then, the loser of the 7-8 game plays the winner of the 9-10 game to determine the eighth seed. This means a No. 9 or 10 seed must win two consecutive games to make the playoffs.

Do you like logo threes? Between-the-legs alley-oops? Shoulder shimmies and no-look dimes?

Well then, this is the game for you. Because Trae Young and LaMelo Ball are about to put on a show.

As the Hawks host the Hornets in a do-or-die game, it’s a marquee duel between two of the game’s best young point guards and entertainers. Young became the second player in NBA history to lead the league in both total points and assists in a season, Ball built on his Rookie of the Year campaign by averaging 20.1 points, 7.6 assists and 6.7 rebounds while shooting nearly 40 per cent from three.

Despite Young’s personal accolades, the Hawks have fallen well short of expectations heading into this season. Coming off a trip to the Eastern Conference Final, where they rolled over the New York Knicks before upsetting the Philadelphia 76ers in the second round, many felt the Hawks could contend for home-court advantage in the first round of the playoffs. Instead, they’ll need to win two consecutive games in the play-in.

For the Hornets, it’s a first season above .500 since they last made the playoffs in 2016, so they’re moving in the right direction. Being back in the play-in also gives the team a chance to redeem itself from the 144-117 demolition at the hands of the Indiana Pacers a year ago.

Although both teams may have different outlooks heading into this one, the Hawks and Hornets are very similar.

• Dynamite offences that can shoot threes as well as anyone. Atlanta is second in offensive rating, Charlotte is eighth. Charlotte is fifth in made three-pointers, Atlanta is 11th .

All that makes for a potential barnburner on Wednesday. But let’s be very clear, these are very good basketball teams as far as ninth and 10th seeds go — the Hornets are the first 10th seed to record 43 wins since 2000-01. It’s indicative of both the strength and parity in the Eastern Conference. It might also help Adam Silver justify why the Play-In Tournament is worthwhile, maybe these teams do deserve a chance.

Key Matchup: Young and Ball is the biggest matchup to watch, and Young especially should turn in a big-game performance based on how he played when the lights shined brightest last season. But determining the actual outcome of the game could depend on the performance of their teammates, so as a secondary matchup let’s go with Miles Bridges versus De’Andre Hunter.

Bridges, a ferocious dunker, took a risk by turning down a four-year, $60-million extension before the season began, then went out and led the Hornets in scoring and is bound to cash in for possibly double that. If the Hornets want to win, they need him to be every bit as good as he’s been all year. Hunter, on the other hand, is having a down year, but he’s a player the Hawks need to step up, especially as one of the few players with the potential to defend well on the roster. If he has a solid game, that’s a massive boost for Atlanta.

Prediction: Atlanta has been red hot at home, winning 9 of their last 10 at State Farm Arena. The Hawks take it.

Most people thought LeBron James, Anthony Davis and the Los Angeles Lakers would headline this No. 9 versus 10 matchup, but no, they couldn’t even finish in the West’s Top 10. Maybe the play-in should expand to 12 teams, eh LeBron?

Instead, it’s the Pelicans hosting the Spurs. And unlike Charlotte versus Atlanta, this game could lack in threes as San Antonio and New Orleans sit 27th and 28th in makes from beyond the arc this season. Long live the mid-range.

New Orleans began the season with a 1-12 record. By the All-Star break it was 23-36, now it’s 36-46 and the franchise has the chance to make the playoffs for the first time since 2018. Even without Zion Williamson.

The Pelicans’ 13-10 record since the break is good for 14th-best in the NBA, they’ve also produced a sixth-best 4.7 point-differential in that span. The catalyst? CJ McCollum.

Since joining the Pelicans, McCollum is playing some of the best basketball of his career, often lining up as point guard and holding the keys to New Orleans’ offence alongside new running mate Brandon Ingram and former Toronto Raptors big Jonas Valanciunas – who averaged a career-high 17.8 points this season.

Whether or not Williamson returns hangs in the balance for New Orleans, just as it has all season. He’s currently back playing five-on-five scrimmages, though Pelicans head coach Willie Green says they’re “controlled scrimmages” and a timetable is still unclear. So will he return to play this season? His stepfather seems to think so, but it’s hard to see it happening for the play-in games.

Zion or not, the Pelicans should like their chances against San Antonio with McCollum and Ingram both healthy and feeding off each other.

The Spurs are just below .500 since the break, and are looking to get back in the playoffs after a two-year drought. Last season, they participated in this exact game, falling to the No. 9 seed Memphis Grizzlies.

To get over the hump and make the second play-in game this time around, they’ll need Dejounte Murray at his best. The 25-year-old guard is enjoying a breakout campaign with career-highs in points (21.1), assists (9.2), rebounds (8.3) and steals (two), good enough to earn him a first All-Star nod earlier this season.

A disparity in head coaching experience might also give the Spurs a boost. Gregg Popovich, his 26 seasons and 1,344 wins against Willie Green and his one 36-win season.

Whoever wins gets to face the loser of Wolves-Clippers on Friday, and if they win that? A date with the Phoenix Suns in Round 1.

Key Matchup: It’s Dejounte Murray versus CJ McCollum. Murray is the clear No. 1 option for the Spurs ever since DeMar DeRozan left to Chicago in the off-season, he’s also a top-tier defender and should do well limiting McCollum.

A secondary matchup is Jakob Poeltl versus Jonas Valanciunas, two former Raptors bigs. They have contrasting styles — Valanciunas thrives on offence while Poeltl is a great defensive anchor for the Spurs. They’ll be going at it in the paint all night long.