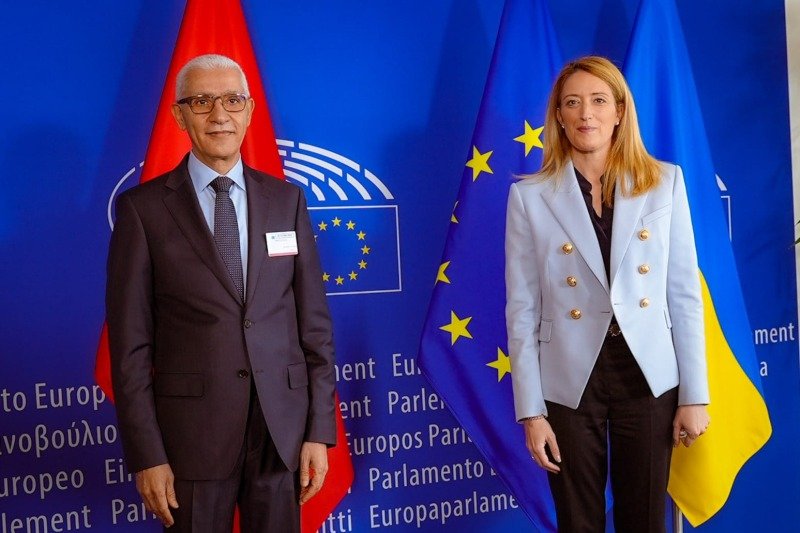 Morocco officially takes over the presidency of the UfM Parliamentary Assembly Morocco officially took, Wednesday in Strasbourg, in the person of the President of the House of Representatives, Rachid Talbi Alami, the presidency of the Parliamentary Assembly of the Union for the Mediterranean (AP-UfM).

The solemn transfer of the presidency of this body to Morocco took place during the meeting of the Mediterranean delegation chaired by Roberta Metsola, President of the European Parliament, in the presence of the Vice-President, Pina Picierno and several European parliamentary officials.

On this occasion, Rachid Talbi Alami, in his capacity as new president of this Mediterranean parliamentary assembly, presented the political priorities of the Moroccan presidency as well as the calendar of its activities.

Rachid Talbi Alami, who leads a large delegation from the House of Representatives, including Lahcen Haddad, Chairman of the Morocco-EU Joint Parliamentary Commission, and the Secretary General of the House of Representatives Najib El Khadi, had previously held talks with Roberta Metsola as well as with European parliamentary officials including group and committee presidents.

These meetings were an opportunity for Rachid Talbi Alami to examine with his interlocutors the means to strengthen and give new impetus to cooperation between the House of Representatives and the European Parliament and between Morocco and the European Union. .

The President of the Chamber of Representatives is making a two-day working visit to the European Parliament, at the invitation of its President Roberta Metsola, as part of the regular political consultations between the two Parliaments.

The PA-UfM offers an opportunity for multilateral cooperation between the elected representatives of the European Union and its Mediterranean partner countries.

The Assembly, which meets in plenary session at least once a year and has 280 members, equally divided between the northern and southern shores of the Mediterranean, works to facilitate the visibility and transparency of the Euro-Mediterranean Partnership, the alignment of the work of the UfM with public expectations and interests, the democratic legitimacy of cooperation in the Mediterranean region and the dialogue between Israel, Palestine and Arab elected representatives.