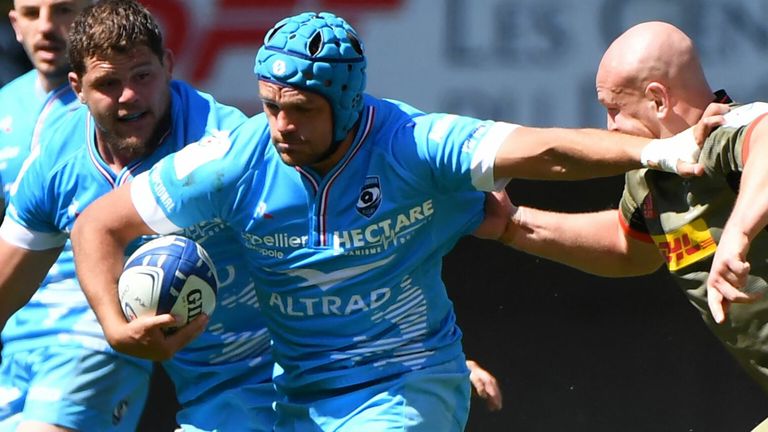 Zach Mercer scored two tries in seven first-half minutes as Montpellier powered into a 34-0 lead; Harlequins rally with four tries in final half-hour to give themselves hope ahead of Saturday’s Heineken Champions Cup second leg at the Stoop

Zach Mercer gave England head coach Eddie Jones a reminder of his outstanding talent as he scored two tries to steer Montpellier to a 40-26 win over Harlequins in the Heineken Champions Cup round of 16.

The home side were 34-0 ahead eight minutes into the second half before English champions Quins finished with a flourish to score four tries and cut the deficit to 14 points ahead of Saturday’s return leg at the Twickenham Stoop.

Mercer was irresistible in the opening half, picking up from a close-range breakdown to dive over for his first try and then racing 40 metres to the right corner for his second.

Playing directly opposite the current England No 8, Quins skipper Alex Dombrandt, he stood head and shoulders above everyone else on the pitch.

The visitors started well enough but their handling and finishing was well below par and they failed to make the most of the chances they created in the opening quarter.

Error after error crept into their game and an attempt kick pass across their 22 in the 22nd minute led to Gabriel N’Gandebe profiting from a knock-down and racing the 25 metres to score unopposed.

Worse was to follow for the visitors when Cobus Reinach was put clear after a Danny Care kick hit Joe Marler’s backside.

That extended the lead to 19 points and it was 26-0 at the break after Mercer had raced almost half the length of the field for a try that Garbisi again converted.

Quins needed a fast start to the second half but conceded a fifth try within 67 seconds of the restart.

The home forwards went into pick-and-drive mode and it ended with former Saracens prop Titi Lamositele powering over to make it 31-0.

Garbisi then made it 34-0 with a penalty and the game looked dead and buried.

But Harlequins are not known as the comeback kings for nothing and while they conceded two penalties to Handre Pollard before the end, they conjured up four tries of their own to keep the tie very much in the melting pot.

George Hammond launched the fightback with a try in the 57th minute as he ran onto a kick through by Marcus Smith.

Then Andre Esterhuizen was sent crashing over from a quick tap penalty and Smith added the extras.

Three minutes later, Louis Lynagh broke into the home half and sent Joe Marchant racing to the line and the conversion cut the gap to 15 points.

Lynagh then picked off a Pollard pass just outside his 22 and ran 70 metres to score at the posts.

Smith’s conversion meant there were only 11 points in it, but Pollard added a penalty at the death to make it a two-score tie.