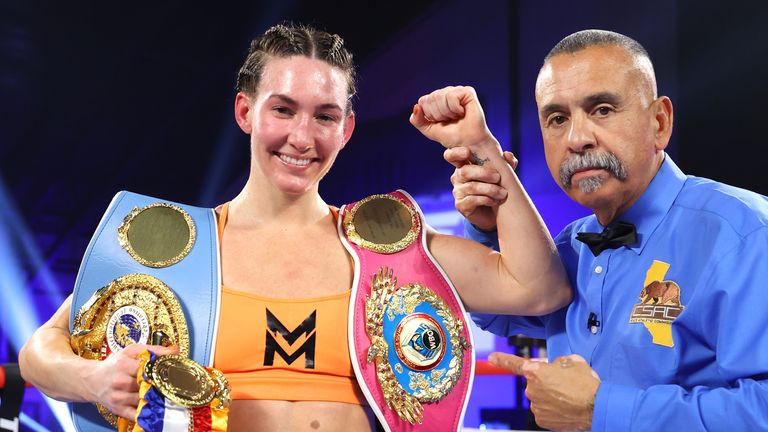 Mikaela Mayer has her sights on the winner of Katie Taylor vs Amanda Serrano after beating Jennifer Han by unanimous decision to defend her WBO and IBF super-featherweight titles.

The 31-year-old Californian was dominant in her home state and despite Han causing a cut near the champion’s left eye in the first round, Mayer was in control throughout and bloodied her opponents nose in the fourth with a straight left followed by a left hook.

Mayer is now keen to unify the division with bouts against WBC champ Alycia Baumgardner or WBA champ Hyun Mi Choi a possibility but says she will move up to lightweight to face Taylor or Serrano if those fights cannot be agreed.

“I’ve been pretty clear that I want to go undisputed at 130 (pounds). Baumgardner and Choi, I’ve been calling them out,” Mayer said in a post-fight interview on ESPN.

“I want that fight, but if they’re not going to give me that fight in a timely fashion, I’m down, I’m game to go up and challenge the winner of Serrano versus Katie Taylor.”

Mayer: Shields too ferocious for Marshall

Mikaela Mayer believes Claressa Shields will “come out on top” when she faces Savannah Marshall, with the undisputed world title fight expected to be announced in the coming days.

Shields sat ringside as Marshall set up their grudge match in Newcastle last Saturday, sending Femke Hermans crashing to the canvas in a third-round knockout win, and turning everyone’s attention to their rivalry.

The Hartlepool fighter has been described by her coach Peter Fury as the “biggest puncher” in women’s boxing, but fellow world champion Mayer insists Shields will have a scarier mindset as she attempts to avenge an amateur loss to Marshall.

Mayer said: “I’m going to sound biased, because Claressa is my team-mate and friend, but although Savannah is proven to have power, I think that Claressa’s punch count and speed is a lot for anyone at that weight to handle.

“I do see her coming out on top, but either way I’ll be there to support. I can’t wait for it.”