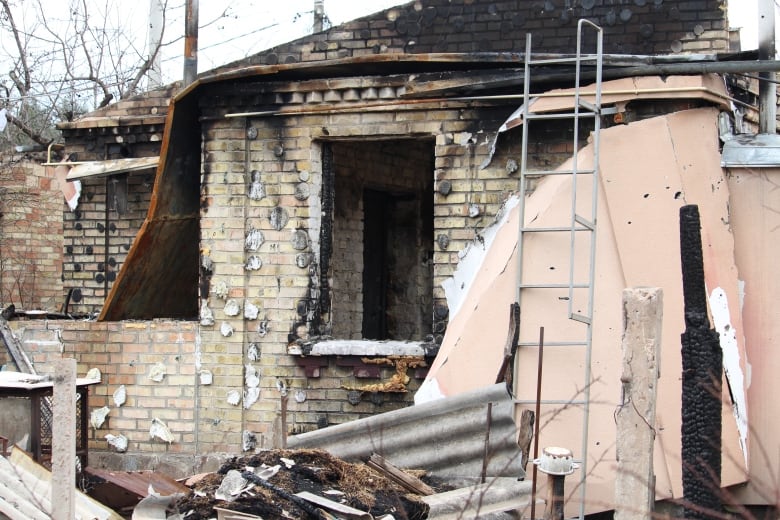 Many residents around war-ravaged Kyiv are going back home, but risk of new attacks has authorities worried

From an elevated spot behind the sandbags near his home in northern Ukraine, Andreii Lopata could watch the Russian troops on the other side of the Irpin River and observe as they fired artillery strikes into his community.

He says he counted 240 hits in three weeks, which left the homes in his village splintered and their yards pockmarked with deep holes.

“In 1941, the Germans bombed us from [the same place], my grandmother said,” Lopata, 53, told CBC News. “They completely repeated the path of the Nazis — exactly the same fascists as came here in 1941, but [now] they are Russian.”

It’s only about a 25-minute drive from Lopata’s home in Irpin to downtown Kyiv, which is why the Irpin River and the town on its banks were such strategically significant points for Ukraine’s military to hold as Russian troops marched on the Ukrainian capital last month.

“I didn’t run away, so that my grandchildren wouldn’t say, ‘Grandfather ran away,'” said Lopata. “I took a weapon.”

A former Ukrainian air force sergeant, Lopata says since he knew how to fire a rifle, he helped out the soldiers from the territorial defence unit guarding the town. He claims he shot and killed at least one Russian soldier who came into his sights.

Lopata was one of the few people who remained in his village during the month of serious fighting. But with Russian forces now banished from the Kyiv region, more people are returning to try to restart their lives.

WATCH | Ukrainians try to rebuilt their communities, as the war moves east:

People in recently liberated parts of Ukraine near Kyiv are reconnecting their lives and links to the rest of the country, even as the front lines of Russia’s invasion moves east to the Donbas region. 2:36

But they are doing so against the advice of Ukrainian authorities, who are urging those who left to continue to stay away.

Every indication is that Russia is poised to launch a new, large offensive in Ukraine’s eastern Donbas region at any moment, and authorities in Kyiv and the surrounding areas remain on high alert. The offensive could come with renewed air strikes and security threats to the capital and its suburbs, and senior Ukrainian ministers warned Wednesday the capital region isn’t ready to have civilians return just yet.

‘We will see an offensive action’

Before the war, Kyiv had a population of almost three million, but most have since fled to safer parts in Western Ukraine or other European countries.

“We will see an offensive action that will include all aspects of [Russia’s] military — sea, sky and land,” said Emine Dzhepar, Ukraine’s deputy minister of foreign affairs, in an interview in her Kyiv headquarters. “There will be missiles, probably both ballistic and Kalibr [cruise] missiles, artillery, shelling, bombings and mines.”

Dzhepar believes “our military forces are strong enough” and that “this military operation will define the future of [peace] negotiations.”

Only a few minutes down the road from Irpin is Bucha, where war crimes prosecutors have been exhuming a mass grave behind a church. The town’s mayor said Tuesday that so far, the bodies of 403 civilians have been discovered. Many, if not most, appear to have been deliberately shot or killed by Russian forces.

On March 30, Irpin’s mayor, Oleksandr Markushyn, said the casualty count for his city is likely lower than Bucha’s — but not by much. Markushyn suggested between 200 and 300 civilians were killed when Russia tried to seize the city.

A daily analysis of the conflict by the Washington, D.C.-based Institute for the Study of War said Russia is working rapidly to try to “reconstitute” its forces that retreated from the Kyiv area after the failed attack.

Ukraine claims Russia has lost nearly 20,000 soldiers and hundreds of tanks since its invasion of Ukraine on Feb. 24, although Western analysts say the real number is likely closer to half of that.

Nonetheless, Russia could still bring a massive force to bear on Eastern Ukraine.

Ukraine’s best and most seasoned troops have heavily fortified themselves in key positions around cities such as Donetsk.

According to the Institute for the Study of War’s analysis, Russia is expected to try to use its advantage with tanks and mechanized infantry to try to encircle a huge number of those troops, to force the Ukrainians to leave their trenches and bunkers to escape.

Many in the Kyiv area fear Russia may not be done with the capital just yet, and could attempt another offensive against Kyiv depending on what happens in Donbas.

Despite that possibility, some residents on the banks of the Irpin River whose homes survived the Russian onslaught have decided to try to piece their lives back together, in spite of the advice to stay away.

“I’m repairing my home as best I can,” said Irpin resident Victor Novyk, who is in his 50s. “It’s all just pain — it’s difficult in my soul.”

Novyk’s modest brick house on Novo-Irpinskya Street lost the glass in a few windows but was miraculously spared significant structural damage, unlike the homes of most of his neighbours.

He, his wife and his 83-year-old mother sheltered for more than two weeks in the basement of their home as Russian and Ukrainian troops fired artillery over their heads.

Eventually, Novyk’s family left to stay with friends, but returned home a few days ago, even though the restoration of electricity and running water likely remains weeks away.

Still, Novyk says his wife as already cleaned up the flower garden, where new tulips are about to bloom.

“We will slowly repair,” Victor Novyk said. “Who knows, maybe someone will help us.”

‘Most of the time we were in our basement’

A few doors down, Larysa Pasyeka, 48, greeted CBC with a huge smile, although looking at the damage around her property, it was clear she was lucky just to be alive.

She said an artillery strike landed in her backyard and demolished the wooden building that housed her sauna, or banya. Next door, another huge round hit her neighbours’ home, killing the two people inside.

“Most of the time we were in our basement,” Pasyeka said. “But there were some peaceful moments when we could come up to the yard and make soup for the [Ukrainian] soldiers.”

Earlier this week, before authorities had issued their warning to stay away from the region, construction crews finished building a temporary bridge across the Irpin River to replace one that had to be destroyed by Ukraine’s military to halt the Russian advance.

At the peak of the battle, there were heart-wrenching scenes of residents trying to evacuate Irpin by crawling over the debris of the bridge.

With a new crossing in place, it will be much easier for people to cross the river to return to homes on the other side — once authorities give the green light.

Andriy Levchenko, the national guardsman in charge of restoring the crossing, says getting the traffic moving again will help people cope with the stress of the conflict.

“In this town, there are a lot of peaceful, normal, young, promising people who would like to live normal lives and they need to be able to go back to their houses,” he said.

“This temporary bridge is one of the first beams of light out of a dark tunnel, and it’s very important for every Ukrainian.”