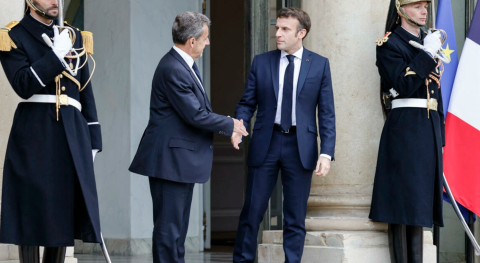 French President Emmanuel Macron on Wednesday denied striking any wider political agreement with conservative former president Nicolas Sarkozy in exchange for his endorsement ahead of a close second round of voting in presidential elections on April 24.

French media have speculated that Macron, who will need to secure a new majority in legislative elections in June following the presidential vote, obtained Sarkozy’s endorsement after offering political favors in return.

“There was no agreement,” Macron told France 2 television on Wednesday, a day after Sarkozy endorsed him.

Macron is facing a tight race against far-right candidate Marine Le Pen, according to AFP.

Sarkozy’s endorsement will help Macron attract voters who backed conservative candidate Valérie Pécresse from Sarkozy’s own Les Républicains party in the first round. But it also risks deterring left-wing voters who will see it as confirmation that Macron – who touts himself as a centrist – is as far to the right as Sarkozy.

Sarkozy, 67, was France’s last conservative president and is still seen as an influential figure in the traditionally conservative Les Républicains party.

However, the very existence of the party now appears under threat after many of its voters backed defected to either Macron or Le Pen in Sunday’s first round.

Macron also said on Wednesday he was ready to forge new political alliances in his bid to continue reforming France.

“The fractures we have in the country will require me not only to obtain a majority but also to rally all those political forces behind me that don’t fully share my views on all topics but would be open to work with me on some reforms,” Macron said.

“I’m not talking about coalitions,” he added, saying that such cross-party arrangements were not suitable to France’s political system.