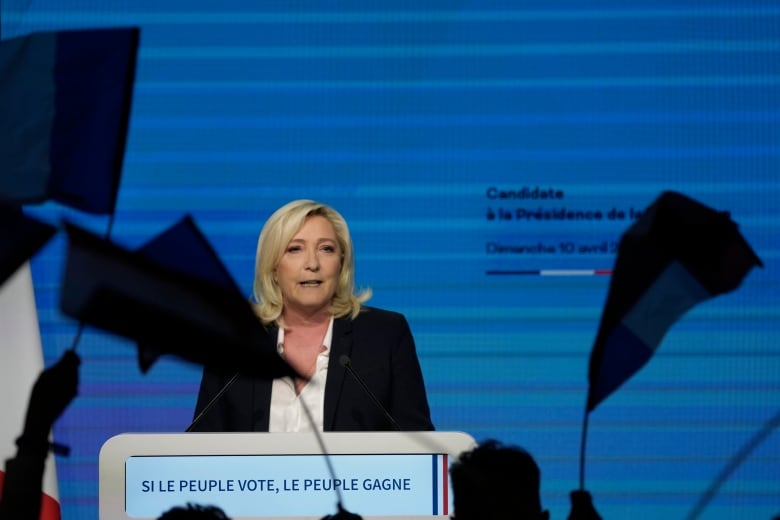 Incumbent Emmanuel Macron will face far-right nationalist Marine Le Pen in a winner-take-all run-off for the French presidency. Both advanced Sunday in the first round of voting in the country’s election to set up another head-to-head clash of their sharply opposing visions for France.

Polling agency projections and a partial official count of votes showed France teeing up for a repeat of the 2017 run-off that made Macron the country’s youngest-ever president — but with no guarantee this time that the outcome will be the same.

Addressing his supporters, who chanted “five more years,” Macron warned that “nothing is done” and said the next two weeks of campaigning for the April 24 second-round vote will be “decisive for our country and for Europe.”

Claiming that Le Pen would align France with “populists and xenophobes,” he said: “That’s not us.”

“I want to reach out to all those who want to work for France,” he said. He vowed to “implement the project of progress, of French and European openness and independence we have advocated for.”

With two-thirds of the votes counted, Macron and Le Pen had pulled comfortably clear of hard-left leader Jean-Luc Mélenchon, who found himself out of the two-candidate run-off in third place.

Other major candidates admitted defeat and, with the exception of another far-right candidate, Éric Zemmour, they all urged voters to back the incumbent on April 24 in order to block the far-right.

After the projections were announced, Macron sought wide support, calling on those from both the mainstream left and right to rejoin his project and defeat the far right.

“I want to reach out to all those who want to work for France. I’m ready to invent something new to gather diverse convictions and views in order to build with them a joint action,” he said, vowing to “implement the project of progress, of French and European openness and independence we have advocated for.”

For her part, Le Pen seemed to target left-wing supporters in particular by promising “social justice” and fixes for “a France torn apart.”

“The French people honoured me by qualifying me for the second round,” Le Pen said Sunday night as she thanked her supporters and called on those who didn’t vote for Macron to back her in the run-off.

Her supporters celebrated with champagne and interrupted her speech with chants of “We’re going to win!”

Yet some of her defeated rivals were so alarmed by the possibility of Le Pen beating Macron in the presidential run-off that they urged their supporters on Sunday to shift their second-round votes to the incumbent. Mélenchon, addressing supporters who sometimes shed tears, repeated three times that Le Pen shouldn’t get “one single vote.”

Describing herself as “profoundly worried,” defeated conservative candidate Valérie Pécresse warned of “the chaos that would ensue” if Le Pen was elected, saying the far-right leader has never been so close to power. Pécresse said she would vote for Macron in the run-off.

The presidential run-off in two weeks appears set to pit the centrist president seeking to modernize the economy and strengthen European co-operation against the nationalist Le Pen, who has sought to soften her party’s racist reputation.

Le Pen this time tapped into the foremost issue on many French voters’ minds: living costs that have soared amid the disruptions of war in Ukraine and the economic repercussions of Western sanctions on Russia.

Pollsters suggest that just a few percentage points could separate the familiar foes in the second-round vote.

That nail-biting scenario sets up a run-off campaign likely to be far more confrontational and volatile than during the first round, which was largely overshadowed by the war in Ukraine.

Not for two decades has a French president won a second term.

Barely a month ago, Macron appeared near certain to reverse that trend, riding high in polls thanks to strong economic growth, a fragmented opposition and his statesman role in trying to avert war on Europe’s eastern flank.

But he has paid the price for his late entry into the campaign, during which he eschewed market walkabouts in provincial France in favour of a single big rally outside Paris. A plan to make people work longer has also proved unpopular.

By contrast, Le Pen has for months toured towns and villages across France, focusing on cost-of-living issues that trouble millions and tapping into deep-seated anger toward the distant political elite.

A more than 10-point lead enjoyed by Macron as late as mid-March evaporated, and voter surveys ahead of the first round showed that his margin of victory in an eventual run-off whittled down to within the margin of error.

With its potential to reshape France’s post-war identity, especially if Le Pen wins, the election has wide international significance.

A Macron victory would be seen as a defeat for European populists. It might also not be cheered in the Kremlin: Macron has strongly backed sanctions on Russia, while Le Pen has worried publicly about their impact on French living standards.

After voting, Le Pen said that “given the situation in the country and in the world,” Sunday’s election outcome could determine “not only the next five years, but probably the next 50 years” in France.

In the 27-member European Union, only France has a nuclear arsenal and a United Nations Security Council veto. As Russian President Vladimir Putin keeps up his military’s assault on Ukraine, French power is helping to shape the European response. Macron is the only leading presidential candidate who fully supports the NATO military alliance.

In 2017, Macron trounced Le Pen by a landslide to become France’s youngest modern president. The win for the former banker — now 44 — was seen as a victory against populist, nationalist politics, coming in the wake of Donald Trump’s election to the White House and Britain’s vote to leave the EU, both in 2016.

If Macron wins, however, it will be seen as a victory for the EU, which has shown rare unity of late in responding to Russia’s invasion of Ukraine. Observers say a Macron reelection would spell real likelihood for increased cooperation and investment in European security and defence — especially with a new pro-EU German government.

Russia’s war in Ukraine has afforded Macron the chance to demonstrate his influence on the international stage and burnish his pro-NATO credentials in election debates.