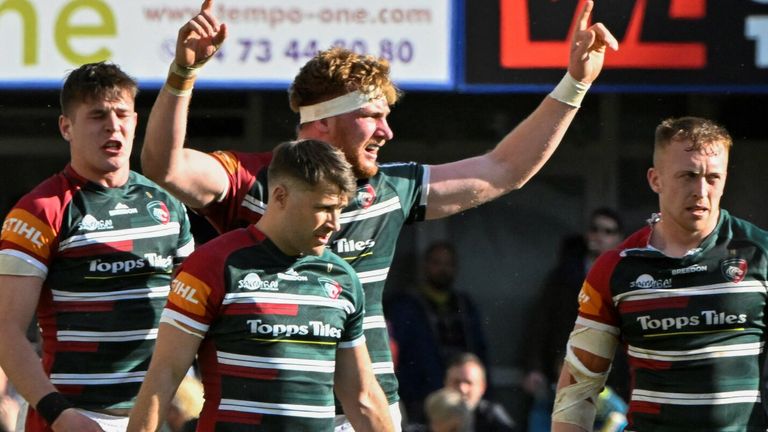 Leicester claimed their first win at Stade Marcel-Michelin in 17 years as they beat Clermont Auvergne 29-10 in Heineken Champions Cup round of 16.

Steve Borthwick’s side will take a commanding lead into the second leg at Welford Road on Saturday after they physically dominated their hosts in the Massif Central.

All Clermont could muster was a single try from Cheikh Tiberghien and five points from Morgan Parra’s boot.

Some terrific handling from Camille Lopez, George Moala, and Kotaro Matsushima put Tiberghien over in the right corner. Parra converted from the touchline to give the hosts a 7-0 lead after 14 minutes.

Leicester hit back when captain Genge powered over from short range after a strong shove from their driving lineout.

Clermont extended their lead with a further three points from Parra’s boot, but they were having difficulty containing Leicester’s driving maul.

Ford failed to add the extras so the score was level at 10-10 at the end of the first half.

Leicester went on the attack with a lovely dummy and break from Ford putting them on the front foot before the England international offloaded to Freddie Steward, but his pass could not find Potter on the outside.

However, Leicester won a penalty at the following breakdown which gave them a lineout five metres out from the Clermont try line.

Clermont had still not found an answer to stop Leicester’s lineout drive and Van Poortvliet scored from short range.

Ford missed the conversion, but Van Poortvliet’s box kick five minutes later was not taken cleanly by Clermont and fell into the hands of Tommy Reffell. The ball was shifted left going through Ford, Dan Kelly and Steward’s hands for Saumaki to coast over for their fourth try.

Ford was successful with this conversion, meaning Leicester held a 22-10 lead with 55 minutes on the clock.

The final quarter of the game was not as comfortable as Leicester would have hoped, with Guy Porter shown a red card for making direct contact with Fitz Lee’s head.

But it did not stop the Tigers who sealed their victory when Steward showed his aerial skills to take a high ball before offloading to Potter who ran in unopposed for their fifth try.