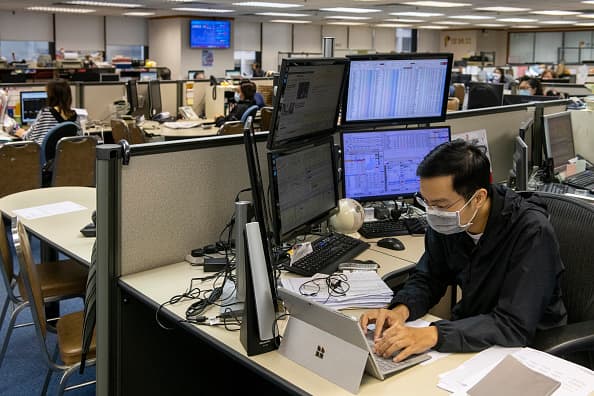 Samsung Electronics reported its operating profit for the first quarter of 2022 likely jumped around 50% as compared to a year ago. The memory chip and smartphone maker posted an estimated 14.1 trillion won ($11.6 billion) profit, it said in its earnings guidance.

The company’s stock was largely flat.

Nasdaq and Hong Kong-listed JD.com announced that Xu Lei will succeed founder Richard Liu as CEO of the company effective immediately. Liu will remain chairman of the board of directors, while Xu will be an executive director.

Last year, Liu stepped back from day-to-day operations, and Xu was named president of JD.

In central bank news, the Reserve Bank of India will continue its monetary policy meeting on Thursday.

Overnight in the U.S., major stock indexes fell for a second day as investors reacted to Fed guidance on tightening monetary policy.

Fed meeting minutes showed that officials are looking to shrink the balance sheet by $95 billion a month. Interest rates are also expected to rise more quickly.

On the economic front, U.S. weekly jobless claims data is set to be released Thursday morning in the U.S.

Both crude benchmarks rose more than 1% on Thursday morning in Asia.

The U.S. dollar index, which tracks the greenback against a basket of its peers, last traded at 99.540.

The Japanese yen traded at 123.68 per dollar, while the Australian dollar was at $0.7504, slightly weaker than yesterday’s levels.